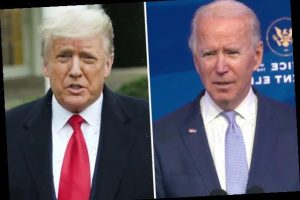 President-elect Joe Biden and incumbent President Donald Trump each addressed the nation on Wednesday afternoon, after a mob of pro-Trump protestors stormed and infiltrated the U.S. Capitol, bringing the ceremonial counting of Electoral College votes to a halt.

At least one person was shot during the melee, the AP reports.

“Let me be very clear: The scenes of chaos at the Capitol do not reflect a true America. Do not represent who we are,” he continued. “What we’re we’re seeing are a small number of extremists dedicated to lawlessness. This is not dissent, it’s disorder. It’s chaos. It borders on sedition. And it must end now.”

“At their best, the words of a president can inspire. At their worst, they can incite,” Biden noted. “Therefore, I call on President Trump: Go on national television now to fulfill his oath and defend the Constitution and demand an end to this siege.”

President Trump indeed followed with a video of his own, running 60 seconds and repeatedly regurgitating his claims of widespread voter fraud, which have been refuted by a range of election officials as well as AG William Barr himself (ahead of his recent resignation).

To the protestors, he said, “I know your pain. I know you’re hurt. We had an election that was stolen from us… but you have to go home now. We have to have peace. We have to have law and order. We have to respect our great people in law enforcement. We don’t want anybody hurt.

“It was a fraudulent election,” he again baselessly claimed, “but we can’t play into the hands of these people. We have to have peace. So go home…. We love you, you’re very special…. Go home, and go home in peace.”