Coronation Street viewers will have to wait until the end of the year to see Yasmeen Nazir (played by Shelley King) receive justice after enduring many months of abuse from her husband Geoff Metcalfe (Ian Bartholomew). In the meantime, the restaurant owner has to stand trial after she was arrested for assaulting Geoff, but it seems one of his previous decisions could be his downfall if Imran Habeeb (Charlie De Melo) has anything to do with it.

In recent scenes of the popular ITV soap, Yasmeen was denied bail on the account she admitted to trying to murder Geoff.

During a 999 phone call she made while her husband lay unconscious on the floor bleeding out, the distressed grandmother broke down and confessed to severely injuring Geoff.

But what the authorities are yet to find out is the extent to which Geoff has been coercively controlling and manipulating Yasmeen – this is what drove her to lash out in self-defence at him.

Viewers will remember how Geoff went on a series of dates with an escort – taking her out for lavish dinners, buying her presents and being with her in the bedroom. 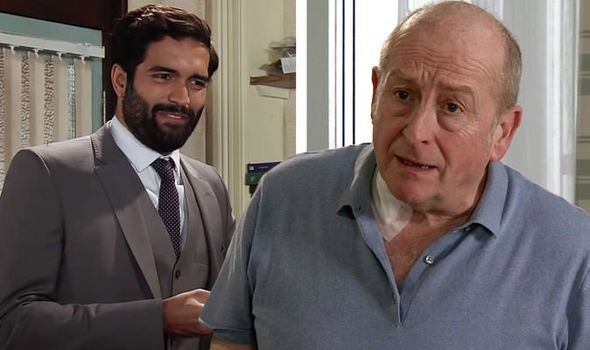 This will come to Imran’s attention in upcoming scenes according to the latest spoilers.

In a bid to create a solid case for Yasmeen, Imran will take a look at her finances.

With Yasmeen and Geoff being married, all of their transactions will be available to the lawyer and he will notice several made to an agency offering company.

It won’t be long until Imran needs answers and he first approaches Alya Nazir (Sair Khan) to see if she can help.

Yasmeen’s granddaughter has been concerned for many months, showing a strong dislike and wariness towards Geoff and his treatment of Yasmeen.

During the rather difficult conversation, Imran will reveal to Alya how Geoff has been frequenting a hotel bar in town.

When Alya is unable to give an explanation regarding this, Imran will have no other choice but to question Yasmeen.

She will reluctantly admit Geoff has been hiring escorts – but this could work in her favour.

Imran is under pressure to get Yasmeen released from prison but to do that he needs to create a strong defence case.

With Yasmeen finding it difficult to open up and realise she was a victim of Geoff’s nasty behaviour, Imran may have to find other ways.

After realising Geoff had been having secret liaisons with other women, will Imran contact the escort agency?

Coronation Street fans will remember Geoff’s vicious call to the company when he found out he had given Yasmeen an STI which he had contracted after sleeping with an escort from their service.

Many phone calls made to businesses are usually recorded, and if Imran rings them up and asks for evidence of their conversation, this could help Yasmeen’s defence.

There is also the possibility Imran will be able to convince the escort whom Geoff went on a date with to speak to him.

Could she stand trial and give evidence against Geoff?

If you or anyone you know has been affected by Yasmeen and Geoff’s storyline, please contact Women’s Aid’s website here. If your life is in immediate danger please dial 999 and ask for the police.

Coronation Street airs weekdays at Monday, Wednesday and Friday at 7.30pm on ITV