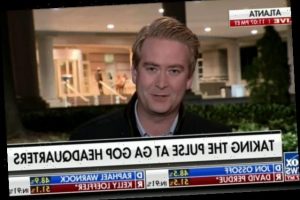 Fox News had correspondent Peter Doocy camped out at the Georgia Republican headquarters in Atlanta Tuesday night to report on the mood at the results came in for the U.S. Senate runoff elections. Things weren’t looking great for Republican incumbents Kelly Loeffler and David Perdue when Doocy joined Shannon Bream on “Fox News @ Night” to explain how those at the watch party were trying to keep their spirits up.

The solution they came up with? Tune out the news they didn’t wanna hear so they could convince themselves that things were going better than they actually were.

“I just spoke to a Republican official who is involved with this runoff effort who told me that when you turn off Twitter, things seem like they are a lot more positive, or at least like they have a lot more opportunities to come out on top,” Doocy said just after 11 p.m. ET on Tuesday night.

“This official told me that they believe Kelly Loeffler and David Perdue tonight have a narrow path, but they do have a path, and that they wish that things were a little bit broader, but they’re looking at the numbers right now, they think that they still are very much in this and that it is relatively early, as far as these things go. Even though of course it is now ticking towards midnight and the day after election day.”

Instead of looking at Twitter and seeing the mounds of pundits pointing out that the outstanding votes to be counted were coming from areas that favored Rev. Raphael Warnock and Jon Ossoff, the Republican attendees ate, drank and watched Fox News.

Fox News talking heads were more tempered in their analysis of the results on Tuesday night, mostly just pointing out that both races remained very close.

“Inside this hotel right now, Kelly Loeffler is Watching the returns come in with her parents as a crowd downstairs in a ballroom, a few hundred strong — it skews very young for an election night event like this — is watching Fox on some big projector screens,” Doocy said.

“We’ve been in and out it seems like it’s pretty festive. People are socializing, people are eating, people are drinking, and just waiting to see what is going to happen.”

This report from Doocy was a neat summation of the conservative media bubble. By avoiding analysis they don’t like, it makes it much easier for them to believe that what they hear from more more sympathetic news sources is a full picture of reality.

As of when this article was published late on Tuesday night, few major outlets had called either race — one exception being NBC News, which declared Warnock the winner in his race against Loeffler. Even so, the infamous New York Times “needle” lists Warnock as “almost certainly” the winner and Ossoff as “very likely” with 97% of the votes counted. You can get more up-to-date results here.