Australians have always had an irreverent sense of humour, and that's exactly what Tom Gleeson represents in winning the Gold Logie. I'm laughing at everyone who can't see the joke, especially in the entertainment industry. The Logies have always been the daggy uncle you laugh at when you're a discerning television viewer and the last laugh was by the ABC that won awards with Costa and Tom Gleeson. My faith in humanity has been restored. Melina Smith, Brighton 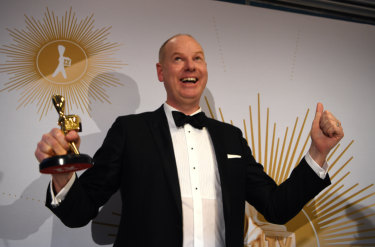 Amanda Keller has moved on from Beyond 2000, now a successful radio presenter supporting Jonesy and a popular TV personality. As a solo presenter she would have excelled at the Logies. Regretfully the decision to couple her with a costume wearing Peter Helliar was not one of her golden moments. Whoever came up with this stupid skit probably has John Logie Baird turning in his grave! Allan Gibson, Cherrybrook

I was heartened to see judges and contestants in MasterChef express their deep concern about food waste inspired by the crusading zeal of super chef Massimo Bottura. Strangely, this has never appeared to be an issue before, considering the vast amount of discarded food from failed recipes in 10-plus years of cook-offs. Just a touch of hypocrisy I feel. Helen Scheller, Benalla

With bullets whizzing past him, Todd Sampson (Body Hack) is brave to enter the danger zone and expose what the brutal Israeli blockade has turned Gaza into, a "prison from hell" where life is almost unliveable. But Channel 10 is braver to air it. There are powerful forces that want to hide the truth about Gaza. Ray Higgs, Ferntree Gully

…  tells half the story only

Body Hack claims not to be a political program that takes sides. But anyone with any understanding of rhetoric must recognise the opening segment of last week’s show for what it was: a heavily loaded, biased representation of a tragic and incredibly complex situation. It took over 15 minutes before there was any acknowledgment of possible contributors to the disaster that presents itself in Gaza and even then, considerable factual omissions were evident. Believe and support what you wish, but do not attempt to conceal your agenda whilst fuelling an already insatiable fire. Karen Davis, Caulfield South

Why did an SBS reporter on Sunday night refer to the boundary between the two Koreas as the "DMZeee"? Have we become that Americanised? Reg Murray, Glen Iris

Tell me your secret

Noni Hazlehurst is on to a winner with Every Family Has A Secret. David Field's discoveries regarding his half siblings were the feel-good factor, to take the edge off the traumatic findings relating to Angela Hamilton's brute of a father. What a supremely courageous, and brave lady she is, to lay it all out there for the scrutiny of the entire nation. This elegant woman epitomises the saying "What doesn't kill you, will only make you stronger". Bravo! John Kruger, St. Albans

The end is surely nigh

The Handmaid's Tale gets sillier by the minute. By Gilead standards, June should have been hung on the wall ages ago; what a trouble maker. Margaret Atwood didn’t know how to end her story and neither does the latest mob, but I hope it ends soon. Dennis Whelan, Balwyn

I had to laugh at the ABC news pixilating the nude swimmers at the Solstice Swim in Hobart last week. Must have been difficult to find any male bits after that freezing swim! Then I reflected on a news item a couple of weeks previously on the Chinese response to swine flu, in which they showed the bulldozing of masses of live piglets into a hole in the ground. No pixilation for that one!
What weird priorities the ABC has. David Baylis, Mentone

Breakfast radio goes down the drain

Further to previous comments about ads for 774 Breakfast … teethbrushing in the shower, watching iview on the loo. Good grief! Di Donigi, Warragul