“House of the Dragon” Episode 7, “Driftmark,” might be the series’ best so far.

After weeks of prologue and arguable time wasting, the show has arrived unambiguously at conflict between the houses of Rhaenyra (Emma D’Arcy) and Alicent (Olivia Cooke). After the funeral of Laena Velaryon (Nanna Blondell), Rhaenyra’s son Jacaerys (Leo Hart) slashes the eye of Alicent’s son Aemond (Leo Ashton), which leads to the series’ most outstanding scene — not the child knife fight that ends with the stabbing, but the quarrel that follows. The episode was written by Kevin Lau and directed by Miguel Sapochnik.

As Targaryens, Velaryons, and everyone around them crowd the hall to figure out exactly what happened, the formidable “House of the Dragon” cast gets to showcase their talents on a glorious stage. King Viserys (Paddy Considine) demanding to know what happened, and despite various ailments and growing age, his fury is palpable.

But no one’s anger comes close to Alicent’s. It’s a knockout performance from Cooke, who only gets better as the scene continues, seamlessly intertwining Alicent’s wrath with horror that what she feared for so long — war between Rhaenyra’s house and her own — has come to pass.

The hall is filled out by Rhaenys (Eve Best), Corlys (Steve Toussaint), Rhaenyra, and Daemon (Matt Smith), all of them concerned for the injured children. The children start squabbling while the adults look on, but it’s already less cute than it would have been a few minutes ago, before viewers saw their small bodies and high voices attack each other viciously. The adults are keenly aware of this and remain solemn.

“SILENCE!” shouts Viserys. “Aemond, I will have the truth of what happened. Now.”

Alicent can’t believe what she’s hearing. “Your son has been maimed,” she tells Viserys. “Her son is responsible.”

D’Arcy doesn’t miss a beat putting Rhaenyra on the defensive, which is a difficult stance for the Princess to take considering that — as Alicent points out — her son brought a blade to what should not have been any type of fight to begin with. Though visibly shaken, Rhaenyra remains strong, her royal and diplomatic instincts taking over. 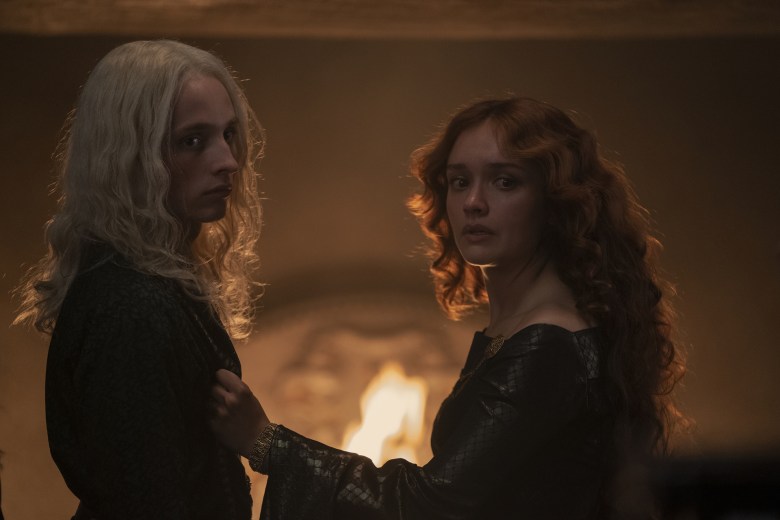 Ty Tennant and Olivia Cooke in “House of the Dragon”

Rhaenyra’s sons reveal that they were called bastards, and the shots that follow are exquisite. First there’s D’Arcy, tremulous but strong; then Cooke’s Alicent, who seems to recognize that a line as been crossed, even as she understands that her son said the quiet part out loud. Ashton’s smirk as Prince Aemond is perhaps the most disquieting; with the gash through his eye still swollen, he appears oblivious to the pain and experiencing only satisfaction at his words and actions. Aegon (Ty Tennant) may be older, but his brother shouldn’t be underestimated.

Rhaenyra uses this to potentially steer things in a more ideal direction, accusing the Targaryen boy of treason, which begets punishment. Alicent is the only one talking sense at this point, and the collective gaslighting of no one immediately taking her side starts to take a toll. “My son has lost an eye,” she states tearfully. She chalks the bastardy comment up to “training yard bluster,” while Viserys remains willfully oblivious. As far as he’s concerned, no one has ever questioned the Velaryon boys’ bloodline, and it’s frankly unthinkable that they would (it doesn’t help in this moment that their alleged father is nowhere to be seen).

Alicent has never asked Viserys to choose between his wife and daughter, or between his sons and grandsons, but she is desperate throughout this scene for him to do so, just once, in her favor. She tearfully says that Aemond is the king’s son, his blood — as if Luke and Jace aren’t. When Viserys still won’t take her side, Alicent snaps, demanding one of Rhaenyra’s sons eyes as a fair exchange, and thereby losing whatever credibility she had in the room up to that moment. She grabs a blade and lunges at Rhaenyra.

Cooke unlocks yet another level at this point, layering in the pain of Alicent and Rhaenyra’s broken trust and lost friendship. From her trembling voice to her brimming eyes and the hand clutching that massive knife, Cooke has full command of this character who she has only played for two episodes. Every defining moment of Alicent’s life has been someone else’s desire or doing, right up to this very moment. She cannot bear that Rhaenyra lives free of this oppression, and that she still manages to resent Alicent through it all.

“Where is duty? Where is sacrifice?” cries Alicent. “Now you take my son’s eye, and to even that you feel entitled.”

But Rhaenyra is having none of it.

“Exhausting, wasn’t it? Hiding beneath the cloak of your own righteousness. But now they see you as you are.”

The lengthy scene is otherwise filled with dialogue neither too dull nor too flowery, and watching it culminate with such well-chosen and potent words works wonders. Alicent releases Rhaenyra, but not without slashing the blade across her arm first. All eyes in the room are on the wound, but only the two women recognize it for what it is: The definitive end of all peace between them, their children, and their houses — and Westeros by extension.

Alicent and Rhaenyra’s friendship was tender and endearing in early episodes and now decidedly a thing of a past. It was something viewers could invest in emotionally, and watching it deteriorate — predictable or not — is distressing. Watching their children play together and then draw one another’s blood is chilling, a reminder of the blood-stained title sequence and what horrors lie ahead.

Aemond has the last word, rising from his seat and once again appearing immune to the pain of a flesh wound. Unsettlingly calm, he tells his mother not to worry (bit late, bud): “I may have lost an eye, but I gained a dragon.”

This is “House of the Dragon” and “Thrones” at its finest, with dynamic camerawork, nuanced performances, and palpable stakes for relationships as well as action. This is House Targaryen having the moment afforded to Lannisters, Starks, and more in “Game of Thrones,” because now there are enough of them to fight, sabotage, and form alliances. This is the promised “Succession” with dragons, the full-tilt family war promised in George R.R. Martin’s “Fire & Blood.” Even without action, “House of the Dragon” uses dialogue, direction, and superb acting to build tension that will undoubtedly break in spectacular and devastating fashion. The game is afoot, and no one is safe.