Ratings: NBC’s ‘Grand Crew’ Doesn’t Have a Grand Debut Ahead of ‘The Voice’ Season 21 Finale

”The Wheel of Time,“ ”Hawkeye“ and ”Arcane“ continue leading the way

In this weekly data series powered by Parrot Analytics, we look at the top new TV shows of the past week across broadcast, cable and streaming that have premiered in the past 100 days.

“The Sex Lives of College Girls” for the first time ranked in the top 10 most in-demand new series last week. While the HBO Max series premiered on November 18, it only reached its highest levels of demand amid the release of its finale on December 9.

The show, created by Mindy Kaling and Justin Noble, has consistently grown in demand over the course of its first season. For the week ending Dec. 10, the show was 21.4 times more in-demand than the average series, which is up by 30.3% from the previous week. HBO Max took a mixed release strategy with this series, dropping several episodes at a time each week, balancing continued demand growth each week with the higher demand peaks achieved by dropping multiple episodes at once. 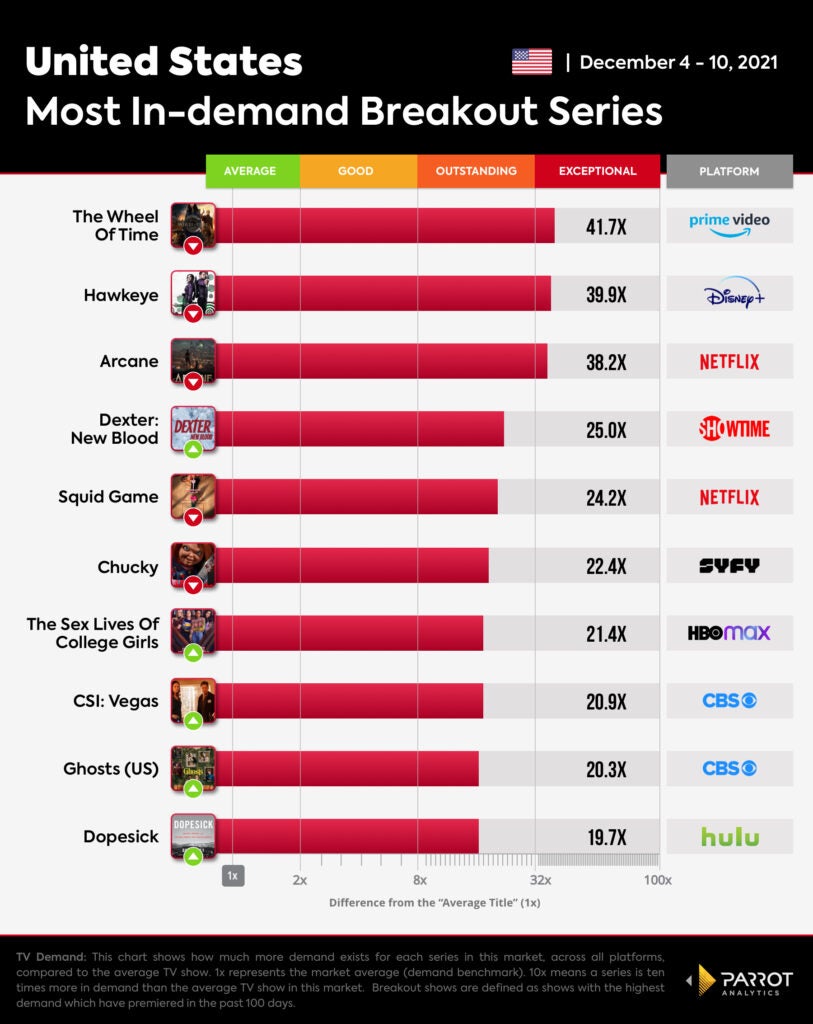 Three new series continued to be in a class of their own at the top of the chart, each with around 40 times the average new series demand. Amazon Prime’s “The Wheel of Time” topped the ranking for another week with 41.7 times the average series demand. Disney+’s “Hawkeye” fell just short of this with 39.9x. Netflix’s “Arcane” still had surprisingly high demand three weeks after its season finale — although its demand saw the largest decrease among the top 3 shows, down 10.6% from last week.

Among the top six new series, Showtime’s “Dexter: New Blood“ was the only one to see its demand increase. However, it currently sits at 25 times the average series demand, which puts it far from overtaking the third spot in the weekly ranking. With episodes scheduled into January, the rebooted series has many weeks still to grow its demand.

Two CBS shows, “Ghosts” and “CSI: Vegas” ranked as the 8th and 9th most in-demand new shows. Both improved their standing, with demand for “Ghosts” increasing an impressive 18.5%. The show will be on hiatus until its next episode which is scheduled for January 6. It remains to be seen if the show will be able to keep up its momentum after a nearly month-long break.