Home » TV & Movies » 'The Sound of Magic': How the K-Drama Lives up to the Webtoon and Its Original Fanbase

'The Sound of Magic': How the K-Drama Lives up to the Webtoon and Its Original Fanbase

Some of the year’s most popular K-dramas were originally webtoons like Netflix’s newest hit, The Sound of Magic. It was originally titled Annarasumanara by Ha Il-kwon in 2010 and told the story of a student burdened with difficulties and losing her childlike spark. She meets a magician who reignites her dream of doing magic. Developing The Sound of Magic from its original webtoon means casting the right actors and accurately bringing the fantasy from the original pages to life.

[Warning: This article contains mild spoilers for The Sound of Magic.]

The Netflix K-drama takes audiences on a six-episode adventure to rediscover what it means to believe in the unbelievable. At the same time, there is a brewing mystery behind the magician Ri-eul (Ji Chang-wook). Like the webtoon, Ri-eul is handsome, dressed in a magician’s cape, and has a childlike charm.

Fans will agree that Ji was the perfect actor for the role. Director Kim Sung-yoon explains in a behind-the-scenes video, “Ji Chang-wook, the actor, is more boyish and playful than I thought. When Ri-eul’s secrets are revealed, he can get very dark too.”

For the role of Ah-yi in The Sound of Magic, it is as if the webtoon creator modeled her after actor Choi Sung-eun. She perfectly captures Ah-yi’s kind and gentle features alongside her tough demeanor to provide for her sister. Fans of the webtoon will find the K-drama made a drastic change with how Il-deung looks in the webtoon.

In the original webtoon, Il-deung is described as “handsome,” but his depiction is the opposite. Il-deung wears glasses but has an exaggeratedly long neck and inflated head, like a balloon. For the May K-drama, this had to be changed. Actor Hwang In-youp was cast in the role and depicted the character’s shyness perfectly.

During The Sound of Magic press junket, the director explains taking the webtoon and adapting it into a drama was difficult. “It took 7 or 8 years to bring it as a drama. I really love the webtoon, so I contacted the writer. The story is difficult to bring to live-action, so I want to take the challenge, and I’m happy to have kept that promise,” explained Kim.

Annarasumanara is a 28-chapter webtoon, and almost all the impactful scenes from the first eight chapters occur in the K-drama. The scene involving Ah-yi’s tights and Ri-eul making her boss disappear in the K-drama occurs exactly like in the webtoon.

In the webtoon, Ri-eul also gets beaten up by debt collectors who threaten Ah-yi. A fan on Twitter was happily surprised at how well Hwang portrayed one of his character’s most pivotal scenes from the original story.

“I am actually amazed how in-yeop perfectly portrayed il-deung character here. this scene explode just like how it did in webtoon,” said the fan. In the scene, the pressure put on Il-deung takes a dire toll. While looking out of a broken window, sweating and pale, he has an inner monologue. He calls for Ri-eul and wonders if he will one day break free of the cold path he is on and run through the field of flowers. 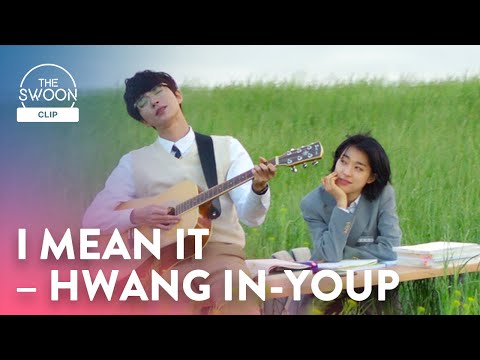 The original webtoon is black and white, and everything happens through written dialogue. For the K-drama adaptation, the director decided it needed music. The Sound of Magic is categorized as a musical. The main characters use scenarios and songs to explain their feelings.

A webtoon fan commented, “I finished the Pilot for THE SOUND OF MAGIC. It was exactly how I remember the webtoon went with some deviations including musical numbers, apparently. I might keep watching if I have some spare time. Got other shows and stuff to consume first. But a nice adaptation so far.”

Many fans agree the musical elements in The Sound of Magic brought to life the metaphors in the webtoon. A fan on Twitter posted the scene of the cold asphalt and Il-deung and commented, “No but this was so well fcking done. What I really loved about Annarasumanara was how it was creative & how the metaphors made soooo much impact. To see the Sound of Magic giving it this intensity I love it so much.”

The addition of music catered to the fantasy and Ri-eul’s magical abilities beyond comprehension. It also depicted the characters’ true inner emotions.

Fans can read The Sound of Magic online at Webtoon.