TalkTV may not have even launched yet, but star signing Morgan has made sure his now show Uncensored is already dominating headlines.

On Wednesday night, the former Good Morning Britain host released a teaser of his upcoming interview with his first big-name guest, Trump, showing the previous US President appearing to storm off and end the chat prematurely.

However, the pair have since been warring on Twitter about what actually went down, after Trump compared Morgan to ‘the rest of the fake news media’ after the footage was released.

He accused him of ‘unlawfully and deceptively’ editing the ‘long and tedious’ interview, which he claims ran over time by an hour.

Now, in leaked audio via Trump’s newsletter, his comms director reminds the host he’d asked his supposed last question ‘four times now’ as he urges the interview to wrap up. 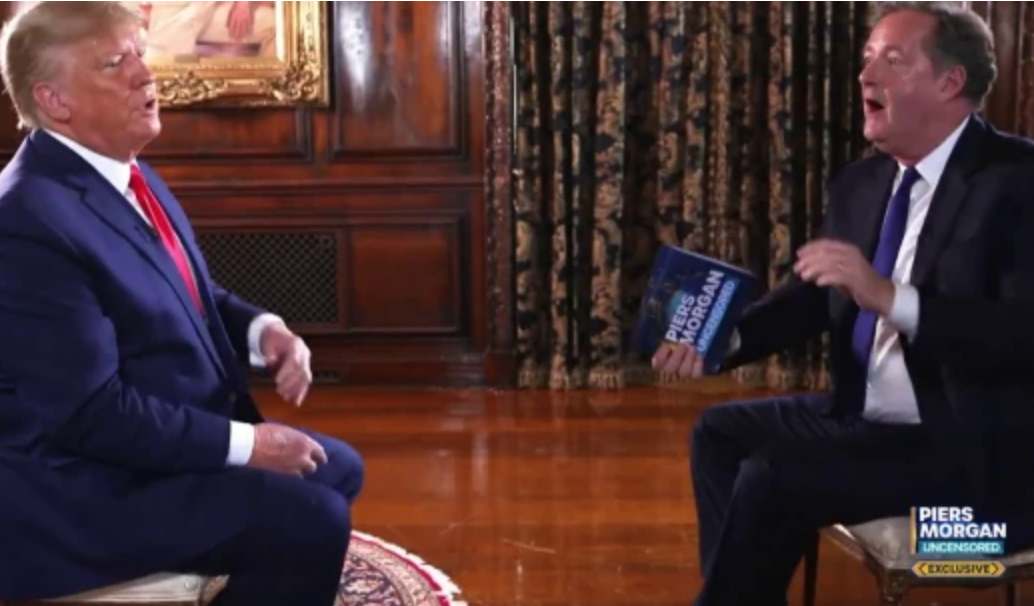 Trump can be heard saying ‘the world is going be blown to pieces’ due to who is running the country in the States.

But Morgan seems determined to continue probing his subject, leading Budowich to say: ‘I feel like you’re lying now at this stage.

The host then asks about Trump’s hole-in-one, a question the former President seems more the happy to oblige in answering.

Trump ends the interview in good spirits and the pair can be heard laughing about his golfing habits.

‘That was a great interview, thank you very much. I really enjoyed it,’ Morgan says afterwards.

Trump’s earlier statement said: ‘He wanted to make it look like I walked out on the interview when my time limit of 20 minutes went over by an hour.

‘The interview was very strong on the 2020 election fraud, with me calling him “a fool” if he truly believed those results.’

‘He went out of his way to deceptively edit an interview and got caught. That’s a big story, isn’t it?’

The 75-minute interview with Trump will be screened on TalkTV on Monday, where viewers can see for themselves what really happened.

Piers Morgan Uncensored launches on Monday at 8pm on TalkTV.