Brasilia: Deforestation in Brazil's Amazon rainforest rose for the fourth straight month in August from a year earlier, according to preliminary government data released on Friday, adding to concerns over fires already ravaging the region.

The Brazilian Amazon is facing its worst spate of forest fires since 2010, with news of the destruction of the world's largest rainforest last month prompting global outcry and worries that it could hurt demand for the country's exports. 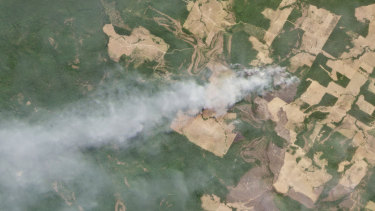 In the eight months through August, Amazon deforestation rose 92 per cent to 6404 square kilometres, an area roughly half the area of Sydney, according to preliminary data from the National Institute for Space Research (INPE).

In August alone, deforestation more than tripled to 1700 square kilometres.

Deforestation is often followed by burning to clear land for farming, so the destruction in August could signal more fires to come in the Amazon, according Ana Paula Aguiar, an INPE land use researcher now on leave at Stockholm University.

"They cut trees and then later they start fires, so possibly [the spike in fires] will continue," Aguiar said. "If they have already deforested in the previous month, we'll see fire this month."

In the first five days of September, INPE registered 2799 fires in the Amazon, a decrease of 60 per cent compared to the same period of 2018.

If the hot spots continue to be registered at the same rate, September could be a better month for fires, falling below the same month a year ago and the average for the last 20 years, Aguiar said. But with only a few days of data, it is too soon to tell, she said.

Brazil's leading meat export industry group and other agribusiness associations on Friday joined with non-government organisations (NGOs) to call for an end to deforestation on public lands, demanding government action amid the fires.

"I haven't seen any contracts being cancelled in any sectors. Exports continue, but the red light is flashing," Marcello Brito, president of the Brazilian Agribusiness Association, said. "If action isn't taken, if the discourse doesn't change, if the rhetoric doesn't change, then things can get worse." 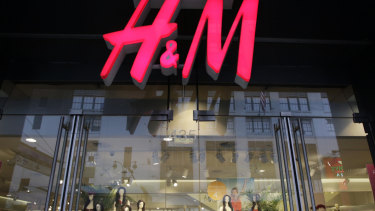 Low-cost fashion retailer H&M is suspending leather purchases from Brazil in response to the Amazon fires.Credit:AP

But low-cost fashion retailer H&M said on Friday it was suspending leather purchases from Brazil to make sure it is not supporting cattle farming that may be contributing to the fires.

The move by the Stockholm-based company follows a similar decision by the maker of Vans and Timberland shoes. Some international investors are also trying to put pressure on the Brazilian government, which has been seen as too lax in its approach to protecting the rainforest.

H&M said the temporary ban would remain in place "until there are credible assurances … that the leather does not contribute to environmental harm in the Amazon." The move may be more about the message than the business impact, as H&M sources the vast majority of its leather from Europe's from the meat industry, with only a small part from Brazil. The company declined to provide figures.

Eleven Brazilian groups, including a meat company and NGOs, signed on to a campaign on Friday calling for a Justice Ministry taskforce to resolve conflicts over public land, representatives of the groups said. About 40 per cent of deforestation in 2018 occurred on public lands, according to the Amazon Environmental Research Institute (IPAM). 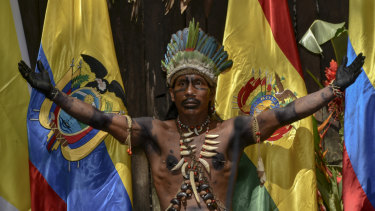 A Colombian Amazon tribesman gestures next to flags of Amazon nations during the Summit of Presidents for the Amazon on September 06.Credit:Getty Images

Environmentalists blame the strong rhetoric of right-wing President Jair Bolsonaro in favour of developing the Amazon for emboldening growers, graziers and miners to expand their clearings.

Bolsonaro has complained that he doesn't have the resources to police an area as large as the Amazon. The country is facing a steep budget shortfall as its economy recovers slower than expected from a deep recession. The G7 wealthy nations offered $US20 million ($29 million) to help fight the fires, but the Bolsonaro government declined it. It has however accepted £10 million ($17 million) in aid from the United Kingdom, according to the British embassy in Brasilia.

The presidents of Colombia, Bolivia, Ecuador and Peru, the vice-president of Suriname and the natural resource minister of Guyana attended the one-day summit in the jungle city of Leticia in southern Colombia. Bolsonaro participated by video link due to illness, while his foreign minister, Ernesto Araujo, attended in person. 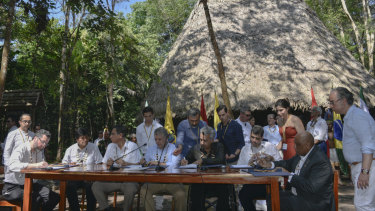 South American Amazon countries met to agree on cooperating to save the rainforest.Credit:Getty Images

"This meeting will live on as a coordination mechanism for the presidents that share this treasure – the Amazon," Colombian President Ivan Duque said at the signing, adding the countries will meet again at the United Nations Climate Change conference in December.

Rain could bring relief to the western part of the Brazilian Amazon, although to the east broad swathes of the rainforest will remain extremely dry, according to Refinitiv data. 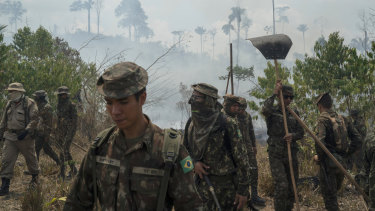 Brazilians soldiers have been sent to fight fires at the Nova Fronteira region in Novo Progresso, Brazil, on Tuesday.Credit:AP

The protection of the Amazon, which absorbs vast amounts of greenhouse gas that causes global warming, is seen as vital to the fight against climate change. Roughly 60 per cent of the Amazon lies in Brazil.

Roughly 650,000 square kilometres of forest in Brazil – an area nearly twice the size of Germany – have no designation as reserve or public land, according to IPAM.