There's an apocryphal line some attribute to Oscar Wilde: if you want to tell people the truth, you'd better make them laugh or they'll kill you.

Todd Peydo trained in music theatre but comes from a family of tradesmen. The two worlds are united in She'll Be Right: A Tradie Cabaret.

"My old man, when I told him about the cabaret, he said, 'You're not taking the piss out of me are you?'"

Peydo isn't taking the piss. He's worked as a tradie, but his music theatre friends often treat the profession as a stereotype. His tradie mates are often just as guilty of stereotyping his cabaret colleagues. She'll Be Right is a bridge between these two worlds.

"There's an identity that comes along with a career, a social identity that isn't necessarily true. A lot of people fall into the identity because they think that's what they have to do," says Peydo.

"It explores the subculture of the working class man and the restraints that it can have on discovering your own identity. When my old man said, 'Are you taking the piss out of me?' I said no, it's just a platform to talk about issues that are happening in our society today."

You'd better make them laugh or they'll kill you.

True stories are everywhere at this year's Fringe, and they're not of the "a funny thing happened on the way here" variety.

Comedian Frank Hampster was a witness at the Royal Commission into Institutional Responses to Child Abuse. He's turned it into comedy.

Hampster's Melbourne Fringe show Cardinal Sins: Pell in a Cell takes as its subject one of the most troubling pieces of the city's real history through the voice of someone with the licence to tell it.

"It's the history of Ballarat's favourite son told through song, story and interpretive dance," says Hampster. "I'm using humour to talk about the elephant in the room."

The first incarnation of Cardinal Sins was "a look at what it was like to grow up in Ballarat during the '70s and '80s and being a Catholic and how much fun that was." Pell in the Cell is the fourth entry in his ongoing series: "This is my show about George and George alone. It's actually quite a funny show. I don't hold back on anything."

Selina Jenkins is another performer not holding back. At last year's Fringe, the seasoned performer took the plunge and presented her first show based on true events. Thy Neighbour told the story of Jenkins and her partner being run out of the country town they called home by homophobic neighbours, and while the story was hair-raising the resulting show saw her nominated for a slew of awards. 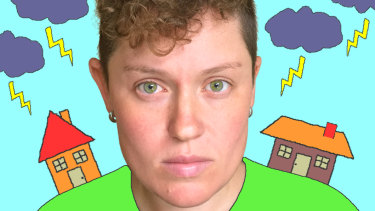 We all have one good story in us, but Jenkins goes further. This year she's performing Boobs, a show based on an even more exceptional premise: in 2012 she decided to have elective surgery to remove her breasts. "When I went into that decision I presumed it would just be like having other cosmetic surgery. You'd find a cosmetic surgeon who did that procedure and you'd book in and pay lots of money and you'd have that done. That just absolutely was not the case."

It turned out that Jenkins was the first person to request a double mastectomy who didn't identify as transgender. "I was female-identified going into this surgery and then wanting to remain female-identified after the surgery."

Jenkins was 31 when she had the surgery. "I wasn't happy with my quality of life and more directly with the relationship that I had with my breasts. For years and years, most of my years … then I discovered that there was a way that I could improve my quality of life and so to me it seemed like a really straightforward solution to a long-time issue."

After the success of last year's show, Jenkins realised that it was OK to be vulnerable on stage. "The older I get the more I do have a responsibility to create work that pushes at the edges a bit. I think I was really scared for many years about what people would think of me, and I just couldn't give a shit any more."

For audiences there's an extra benefit when it comes to true stories: a performer has the incentive to try that much harder when it's their personal life being revealed. "There is a lot more to lose. What that means is that I feel that I put a lot more work and effort into it. If it's my story and it's me that I'm representing onstage, I feel like I really take the time and effort to create a performance piece with songs and stories and really intricate moments and I really want them to be good."

Georgie Adamson's Who Gave Me Genital Warts? announces its subject matter from the outset. Recounting your sexual history to a roomful of strangers might sound like a nightmare for some, but Adamson is gleefully undaunted.

"It's more of a look back at learning to have sex and learning to fall in love in your late teens and early 20s. There is an element of sincerity to the show, but sex is also funny. When you're 19 and wearing a crop top on an 8 degree night and you're trying to impress some loser, learning to grow up and be yourself is just stupid."

The hardest part was telling her parents the title of the show. She's still not sure they understand it's based in reality.

True tales bring with them added responsibility, since it's often not just your own life you're recounting. There's one particular member of the public Adamson is hoping won't turn up to the show, but for the most part she's been careful not to embarrass any former lovers. "It's primarily about me, more so than it is about my sexual partners. I made sure when I was writing it that the funny stories that I share are just as critical of myself and my own actions as they might be of theirs. And I don't use anyone's names."

Jessica Knight never dreamed of turning her upbringing into a live show until she performed a short set last year at the Moth, a regular storytelling night that has taken root in cities around the world. It struck a chord with the crowd and judges gave her the night's prize.

Her Fringe show Mormon Girl grew out of that night. She was raised in a religious faith that puts motherhood at a premium, but Knight herself was born without a uterus. The ground the show covers includes "mental illness, faith and sexuality, and living with a disability".

Knight has been performing stand-up for a while, but the true subject of Mormon Girl is "actually stuff that I haven't been brave enough to talk about until now. If I was 22 I would never have had the confidence to talk about the stuff that this show is about. The show is for 22-year-old Jess."

We're living in a golden age for memoirs and confessionals, tell-alls and self-publishing. Performing your story is different to writing it, though. Scarier, for one thing, but also potentially more rewarding.

"Performance helps me reclaim the power and telling the story in person helps me take back that power that I felt I never had growing up," says Knight. "Telling it in my own words. A lot of people have grown up trying desperately to fit into the mainstream and failing through no fault of their own. I think that's why art is so important, because it gives you an opportunity to say or show or create the things that you never saw around you growing up, that would probably have helped you not feel so alone."

Nikki Viveca's Fringe show Wasp Movie uses a personal story to examine larger truths. Last year she found the ceiling of her rental home had become infested with wasps, and as the hive grew bigger and bigger her life became increasingly defined by her new housemates.

"There were times when I was running around with a can of hair spray fighting them off as they came in. But it almost felt like a Greek tragedy because obviously the end of this story is tragic. Either someone gets seriously stung by the wasps or the wasps are going to die. You can tell from the moment they're in there that you're not going to learn to get along and have a nice time."

Wasp Movie isn't just a funny or tragic story. Viveca's ongoing proximity to her wasp colony eventually resulted in something akin to Stockholm Syndrome. "At the same time I was running around chasing the wasps there was a part of me rooting for them. It was the perfect place for a hive. It was like a wasp's dream home, and I felt bad about squashing their dream."

She'd always had a special interest in wasps, too. "I find all of the social insects fascinating, like ants and bees and wasps. They have these societies which are almost analogous to human society.

"One of the reasons I've always liked wasps until they lived with me was because they're one of the animal species in which we've seen queer behaviour. A lot of male wasps are bisexual and there's wasps that display cross-gender behaviour, things like that. Anatomically this wasp is this sex but then it behaves like the other in the mating grounds, things like that."

All of this meant that Wasp Movie is far from the humans v pests story it might appear at first. Viveca's ordeal coincided with the larger mess of the equal marriage debate and the social divisions it brought about.

"Human society seemed really hostile and messy at the time. And then we're attacking these pests, the wasps, but the wasps all worked together. They're all backing each other up. It struck me how they endured everything. They were sprayed multiple times and kept going. Stiff upper mandible or whatever wasps have. Their society weathered all this stuff while personally I was going to pieces because of the situation."

If the honesty of a true story lends it extra weight, Lucy Fox's Fringe show Placebo confuses the matter by presenting three true stories based around fiction. As a teenager she was a card-carrying member of a Christian cult. In her 20s she toured Australia with a blues singer who was a pathological liar. And her brief spell as a nurse in a mental health unit saw her giving credence to the delusions of others.

Fox had had faith in God, which she later lost, and faith in a sociopath she knew was lying. "I was really like, 'Well, who am I to tell that guy that the aliens aren't speaking through the radio?'"

The thread connecting each of her stories is the placebo effect, whereby a lie leads to the same outcome as the truth. Her blues-playing mentor might have been an irritant off-stage, but she thought, "If he can get us into these situations where we're playing really good rooms and touring, what can I do? What does that make me capable of doing? In the end, I think he really pushed me to the next level as an artist."