It was back in early 2019 when artistic directors Gideon Obarzanek and Hannah Fox started hatching ideas for Melbourne’s inaugural RISING festival, which was slated for August 2020.

But as COVID-19 spread and Melbourne spent months in extreme lockdowns, it became clear in their virtual catch ups that the festival would not only have to be postponed, but re-thought to give an appropriate nod to what Melburnians – and the world – have endured. 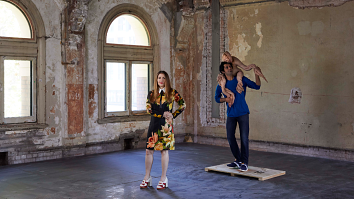 Witness some of the very best of Melbourne’s diverse culture.Credit:Pete Tarasiuk

“I think Hannah and I have created about 20 different festivals in the last 18 months, only to shred them a week later,” Obarzanek says.

“It was always called RISING and the title remains really fitting to suit what Melbourne has experienced – we believe RISING will be that gateway opportunity to bring the community back together.“

The resulting festival, which replaces the Melbourne International Arts Festival and White Night Melbourne from May 26 to June 6 this year, is set to be the city’s newest major event.

Kicking off at sunset, Melburnians will get to see their city in an entirely new light, with events taking place everywhere from the Arts Precinct to Town Hall to Chinatown and along the Yarra River.

“We will be showcasing some of the very best of Melbourne’s diverse culture with artists, musicians, choreographers, writers, theatremakers, designers and hospitality all coming together,” Obarzanek explains.

“It’s a very large endeavour and we see it becoming a really important national cultural place for great works.”

Perhaps the most significant piece of programming will be Patricia Piccinini’s A Miracle Constantly Repeated.

The immersive experience will take over the top floor of Australia’s oldest train station, Flinders Street Station, including its mysterious majestic ballroom, which has been closed to the public for some 35 years.

“Flinders Street Station has been this almost mythological space that very few people have seen. We’re not only able to give Victorians the opportunity to witness this long-hidden space but to see it really transformed by another Melbourne icon, Patricia Piccinini,” says Obarzanek.

Built in 1910, the now-abandoned top floor of Flinders Street Station was originally constructed for the “betterment” of rail workers, and included a gymnasium, library, boxing ring and lecture hall.

By the 1950s and 1960s, the ballroom was the setting for public dances, with attendees spilling downstairs to catch the last trains home. But since 1985 the top floor has been closed to the public, and it’s re-opening could not be a grander affair.

For RISING, Piccinini will create a walkable ecosystem of hyper-real silicone sculptures, video, sound and light, in a bid to explore themes of nature, care and connection, while looking at the ability of communities to bounce back from traumatic events.

“We put a call out to artists for ideas that were ambitious, unusual and radical; and that were contemplative and philosophical, celebratory and unifying. To say that Patricia’s proposal exceeded that brief is an understatement,” Obarzanek says.

“It’s hugely ambitious and a perfect collision of place, art and experience coming together to create something truly extraordinary for Melbourne audiences.”

One for all to add to the calendar.

More in Melbourne this month

Head to the Immigration Museum to hear 72 moving real-life stories presented in immersive environments. You can expect tales of embarrassment and triumph.

Disney: The Magic of Animation

Discover the creativity and innovation of almost 100 years of Disney Animation in ACMI’s Melbourne Winter Masterpieces exhibition. Original sketches and rare artworks from 1928 are on show.

The Lifespan of a Fact

This comic Broadway play, making its Australian premiere at the Melbourne

Theatre Company, explores the epic ideological battle over the nature of truth and the value of storytelling.