Approach on state borders needs to be more transparent, consistent

For most nations or regions that managed to largely stay free of COVID-19, there will always be a point of transition. With the widespread acceptance that COVID-19 will become endemic, learning to live with the virus must be confronted at some point.

New South Wales and Victoria are certainly well under way. While there was some variation in how much freedom was offered at the 70 per cent double dose point between Sydney and Melbourne (Victoria’s Chief Health Officer Brett Sutton was typically more cautious), by the 80 per cent mark the two states largely aligned in giving far greater freedoms. This opening up was carried out while community transmission of COVID-19 and pressure on hospitals was a daily reality. 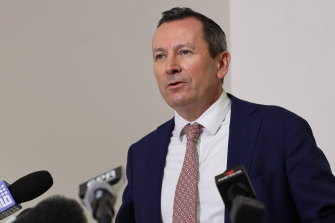 For the remaining Australian states, learning to live with COVID-19 will be a different route. Having mainly kept COVID-19 out of the community, they already have most of the freedoms those in Melbourne and Sydney are now getting back. But once the borders open, there will be no going back to that COVID-19 free status.

It’s going to be a jarring experience for those who have spent most of the pandemic leading a relatively normal life. But they have no choice. With all states having now released their road map out of the pandemic, we have a clearer picture of how open Australia will look over the coming months. Some real issues stand out.

The most obvious is how out of kilter Western Australia now stands with the rest of the country. On Friday, WA Premier Mark McGowan announced that its borders would not open until 90 per cent of the state’s population aged above 12 years old is fully vaccinated. At the current rate of vaccinations in WA, that date would probably not be hit until late in January or early February of next year.

This just does not line up with most expert health advice, including the Doherty Institute modelling, which believes it is relatively safe to open up at the 80 per cent double-dose mark. And when you take into account that the COVID-19 vaccines are most effective at slowing the spread of the virus during the first few months – meaning this summer should be the high-point of protection for most people – the argument for WA to keep its borders closed for so long struggles to hold water.

Mr McGowan’s decision to defer opening the border is also going to mean many thousands of people are going to spend Christmas apart from their loved ones for another year and curtail travel and work plans for many thousands more.

The only legitimate reason for delaying is the shockingly low number of Indigenous Australians in WA that are yet to be vaccinated. The first dose rate ranges from 40 to 58 per cent and second dose is between 24 and 44 per cent, well behind the rate for non-Indigenous people. This is an appalling failure of the federal and state governments that are meant to be working together to ensure First Nation peoples are protected.

The closing of state borders has been a highly contentious issue since the pandemic began. It has frustrated the federal government, which has been powerless to override the closures, and been a consistent point of friction between premiers. Local politics has most often won out over the national interest and any attempt through national cabinet to formulate some common parameters has failed.

The states have carried much of the burden of containing COVID-19. With some obvious shortfalls, this has been the right call. But the arbitrary nature, at times, of the closing and opening of borders demands a more transparent and consistent approach. The latest call from Mr McGowan makes clear why that is the case.