More than 1,400 runners plan to finish murdered billionaire heiress Eliza Fletcher’s jogging route along which she was abducted as family releases montage of videos in tribute

More than 1,400 people have signed up to run through the streets of Memphis at 4am on Friday – marking a week since Eliza Fletcher was kidnapped and murdered on her morning run, and completing her regular route.

Fletcher, a 34-year-old kindergarten teacher, was snatched at 4:30am while running through Memphis, and forced into an SUV. Her body was found on Monday, dumped in long grass near an abandoned house in the city.

Cleotha Abston, a 38-year-old career criminal who served 22 years in prison for kidnapping a lawyer, has been charged with her kidnap and murder and appeared in court on Wednesday.

Fletcher’s family on Wednesday released a video, showing the beloved kindergarten teacher addressing her pupils, in a tribute to her and her legacy.

In the clip, filmed during the pandemic, she sings ‘This Little Light of Mine’ to her students, and chats about her dog.

A group of Memphis women is now organizing a run to mark the week since she disappeared.

‘We created this run as a way to honor Liza and cope with our own feelings,’ the organizers wrote on Facebook, adding that the 8.2-mile run follows a route she would regularly run.

‘Our goal is to stand up for the women in the Mid South and emphasize that women should be able to safely run any time of day.’ 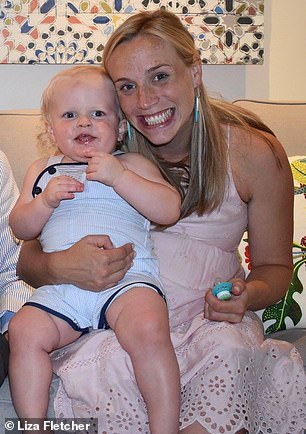 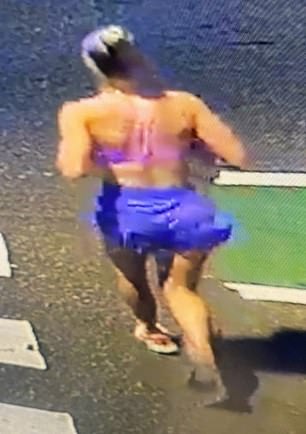 Fletcher was last seen about 4.20am on Friday, when she was jogging (right) in Memphis and a man approached her and forced her into an SUV after a brief struggle, police said 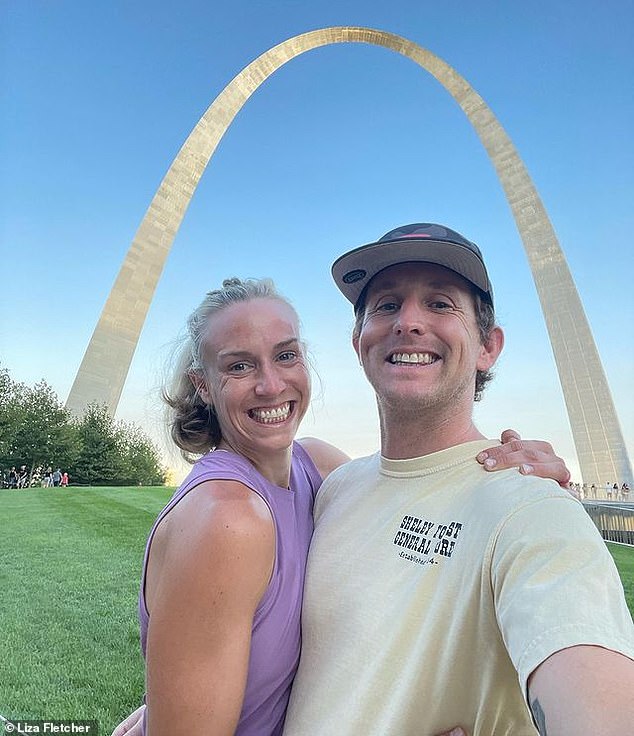 Fletcher, 34, (pictured with her husband) was kidnapped after being forced into a black SUV on Friday. Cleotha Abston, 38, has been charged with her kidnap and is set to be charged with her murder after a her body was found in long grass against an abandoned house 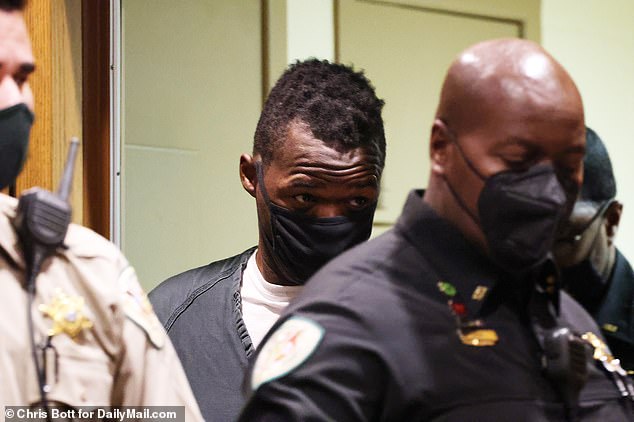 Cleotha Abston, 38, appeared in court on Wednesday and could face the death penalty. He has not yet entered any pleas to the charges against him, which include murder, kidnapping and tampering with evidence

A Facebook group has been set up to coordinate Friday’s run, in Fletcher’s memory

Danielle Heineman, a mother and keen runner, who is among the organizers, said that she was shaken by Fletcher’s killing, and angry at some of the responses.

‘I think it’s important for us to stand up, for the women in this community to stand up for ourselves,’ said Heineman.

‘We all just feel like we can’t run alone, and we should not feel that way.’

She said some of the reactions bothered her.

‘We have jobs, we have families to take care of, and we have other commitments. Yet we have a right to be runners also.’

Heineman said the event was originally just a few friends but has now snowballed.

‘My thought was that a few of us would go out, and we would just kind of stand up for that right and say, you know what, I am running at 4 in the morning, and nobody is going to stop us from doing that,’ she told Fox News.

‘We have a very strong running community here in Memphis, and this just shows it.’ 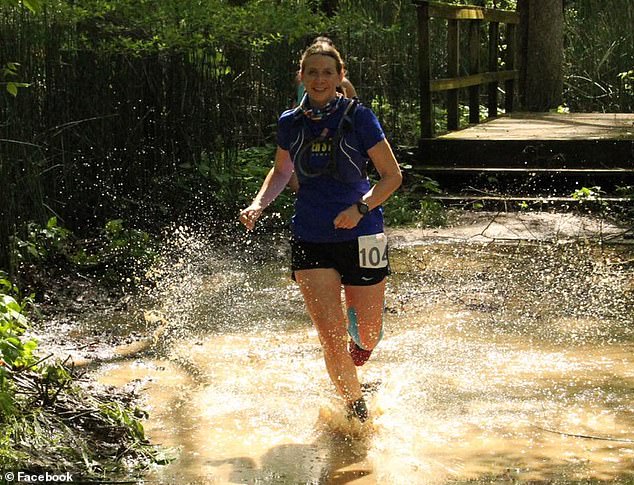 Danielle Heineman, a mother and keen runner, is among the organizers of Friday’s run 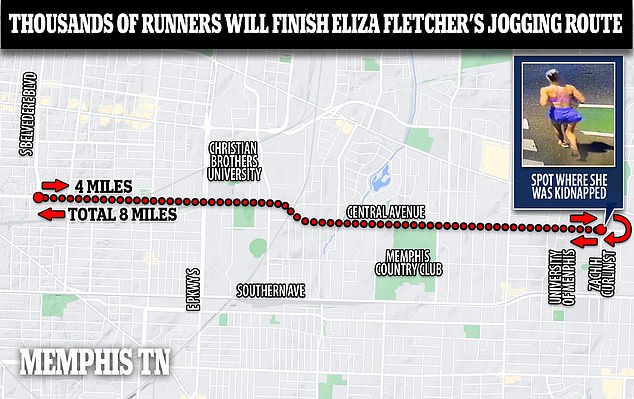 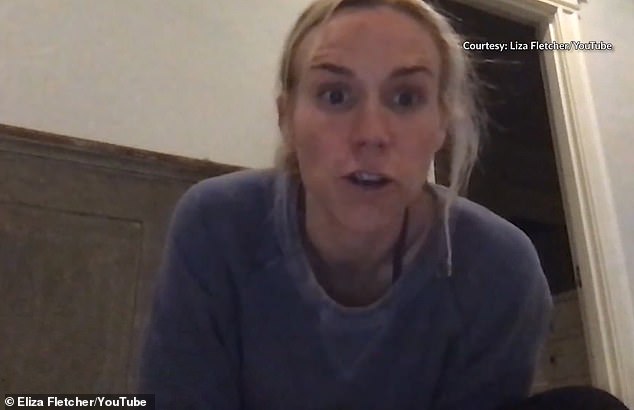 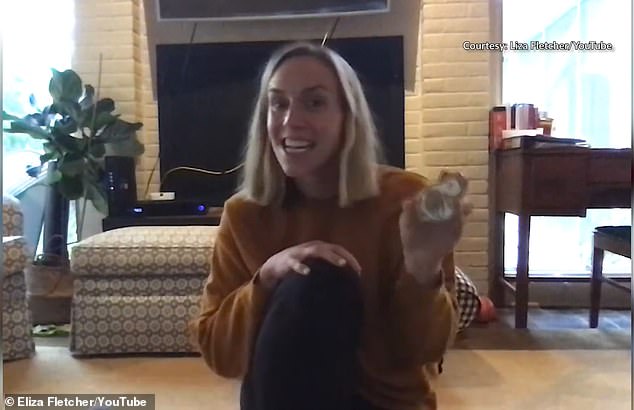 Fletcher taught kindergarten at St Mary’s Episcopal school, and filmed the video of her singing and talking about her dog

Heineman and the team emphasize that the event is not organized by her family or endorsed by them, and ask participants not to speak to the media out of respect for the family.

They are asked to wear bright colors, but not bring dogs or strollers to avoid disturbing residents.

On Wednesday the man accused of killing Fletcher, Cleotha Abston, appeared in court in Memphis, Tennessee, charged with first-degree murder, kidnapping and tampering with evidence.

The judge refused him bail.

Tennessee is a state with the death penalty, and prosecutors said that they were not ruling it out if he is convicted.

Abston wore a green prison issued uniform and a mask, and only spoke to his public defender during the short hearing.

Prosecutors would not confirm if he would be issued with any further charges, with the judge adjourning the hearing until Thursday.

Shelby County District Attorney Steve Mulroy confirmed that the incident was ‘isolated’ and that Fletcher had never met her attacker before. 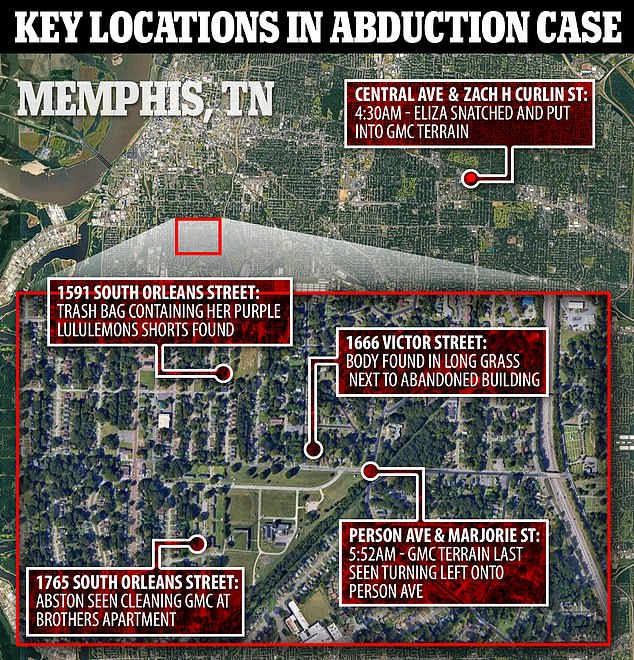 When asked whether Abston should have been released early after spending 22 years in prison for kidnapping a lawyer, Mulroy said: ‘It’s easy to talk about things 2020 hindsight.

‘In this particular case clearly, he shouldn’t have been on the street. Our office opposed parole at the time and in hindsight the parole decision was a tragic one.

‘When you have repeat violent offenders, they need to be dealt with very strongly.’

When asked by DailyMail.com if Fletcher was sexually assaulted, the DA refused to answer.

It comes after court documents reveal that he was previously convicted of raping a man when he was a teenager.

Abston, 38, was just 11 when he first appeared in Shelby County Juvenile Court, in Memphis, Tennessee, charged with theft of property $500 or less.

He was detained 16 times from October 1995 to May 2000 for rape, aggravated assault and unlawful possession of a weapon. 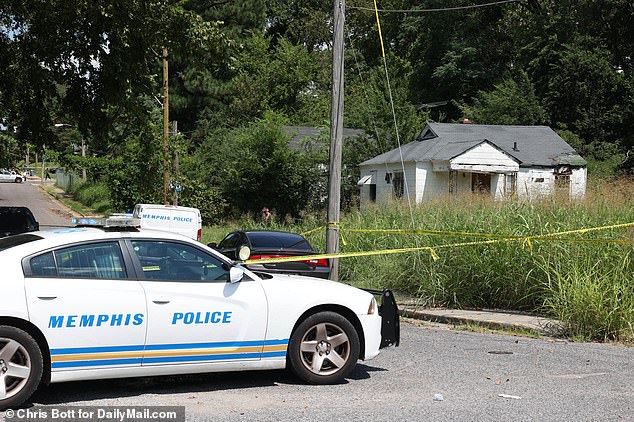 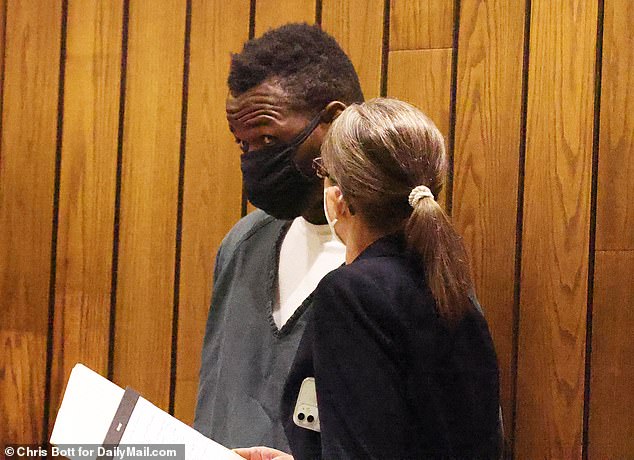 Speaking after the hearing, Shelby County District Attorney Steve Mulroy confirmed that the incident was ‘isolated’ and that Fletcher had never met her attacker before 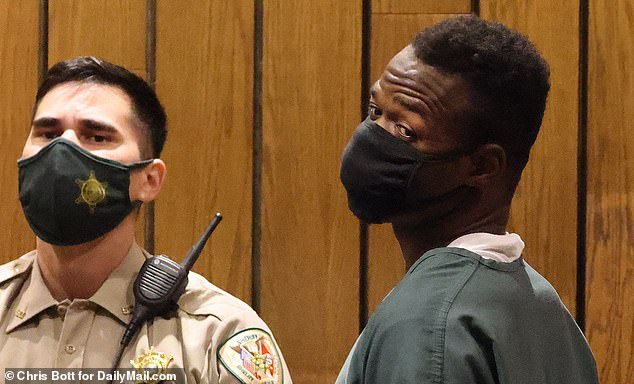 Abston did not speak during the short 15 minute hearing, and was led away by officers with his hands cuffed behind his back. He confirmed in an affidavit that he was unable to afford bond or legal representation 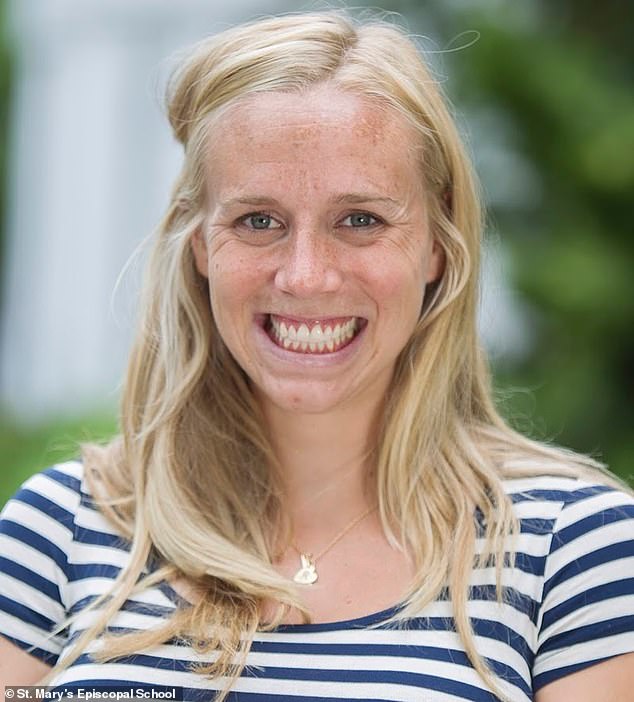 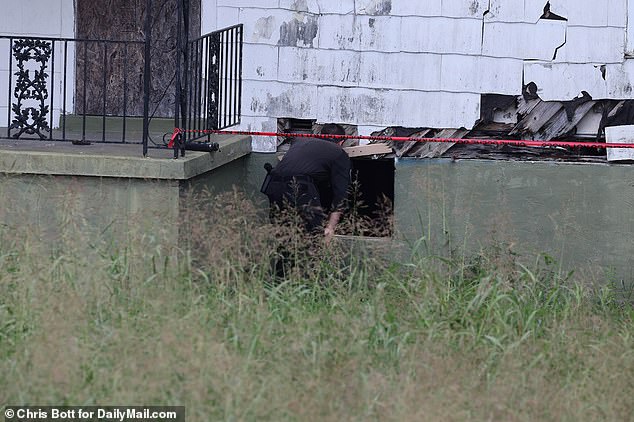 Abston, who is accused of taking the keen jogger, drove with her in his GMC terrain for an hour and a half before the vehicle was spotted turning into the road where her body was discovered. Officers searched underneath the porch of the house where she was found

According to Action News 5 his first charges were filed against him in June 1995, and that he was part of the ‘LMG’ gang – which stands for ‘Lemoyne Gardens Gangstas’. 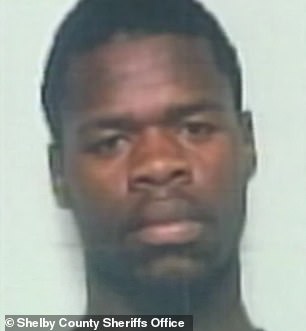 Cleotha Abston, pictured in 2000, was first arrested when he was just 11 years old and was in and out of juvenille court when 16 times in five years before he kidnapped a lawyer

Records show that Abston was accused of raping a man and was placed in the custody of Shelby County’s Youth Services Bureau.

Two weeks after he was released from his final spell at the SCYSB to his mother’s care, he was transferred to adult court for kidnapping lawyer Kemper Durand.

‘We will hear more about his record at the appropriate time in court.’

Abston was sentenced to 22 years in prison for the offense, and was released in 2020.

New footage shows the suspected killer driving to the home of his brother, Mario, at the Longview Gardens apartment complex around 8am on Friday morning.

Less than four hours earlier Abston allegedly kidnapped the heiress seven miles away, close to the University of Memphis.

Surveillance footage obtained by police, which has not been released, show a man running ‘aggressively’ towards Fletcher and forcing her into the passenger side of the vehicle.

The pair struggled, and the car then sat in the parking lot for four minutes with Fletcher inside before driving off to an unknown location.

Police tracked him down after finding his DNA on Champion sliders that were left behind during the struggle with Fletcher, as well as her cell phone and water bottle.

In the video, he can be seen sitting in his car after arriving at the complex before getting up and going to the trunk of the car. It’s unclear what he was getting from the trunk. 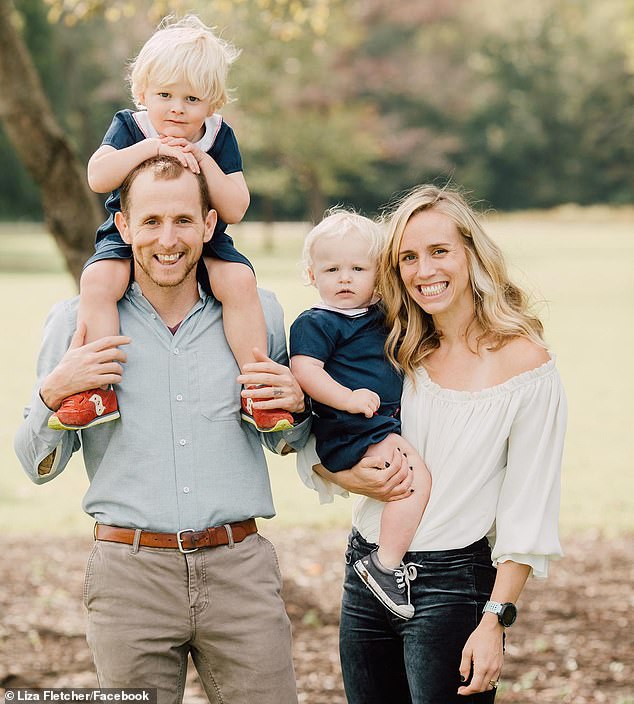 Missing mother Eliza Fletcher pictured with her husband Richie and their two children. The family described her as a ‘special’ woman who was taken away from them in a ‘senseless’ manner 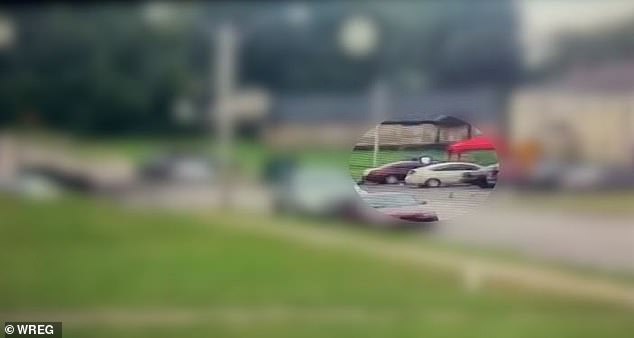 According to the criminal affidavit in the case, Mario Abston’s neighbors witnessed the suspect cleaning out his car and reported that he had been acting strange. New surveillance footage shows Abston cleaning out the GMC Terrain after kidnapping the mother-of-two 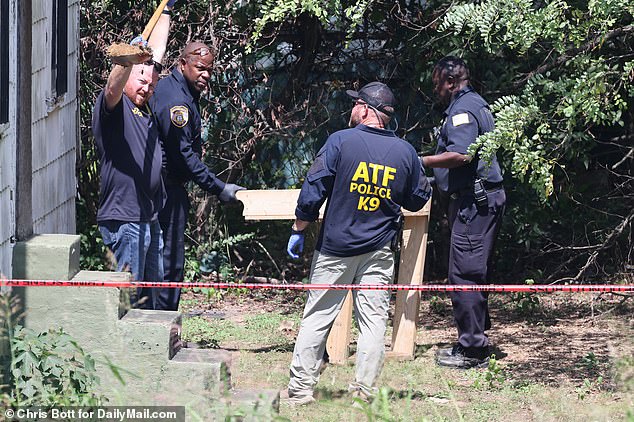 Memphis Police Officers were seen searching the area where Eliza was found. She remained hidden by long grass and foliage for four days before discovery with blood seeping into the soil

After rummaging around in the vehicle’s trunk, Abston runs into his brother’s home before returning to the car and spends more than an hour on the passenger side of the GMC Terrain.

His brother Mario, 36, described his brother as acting ‘strangely’, and has also been arrested on several felonies that are unrelated to Fletcher’s case

Abston told police that his brother had been cleaning the interior of his GMC Terrain with floor cleaner, as well as washing his clothes in the sink of the house.

Cleo Henderson, Abston’s father, is currently in prison for second-degree murder and is scheduled for release in 2044.

Another neighbor confirmed that Abston was acting ‘very strange’, and police determined that his phone pinged near to where Fletcher was taken.

They discovered the missing mother-of-two in long grass close to where her Lululemon running shorts were found in a trash bag.