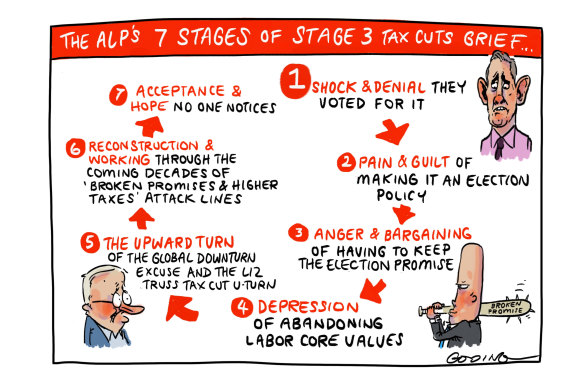 Your editorial (“Tax squeeze on multinationals overdue”, The Sunday Age, 2/10) made the clear point that the $1.9 billion Labor expects to gain from multinationals in tax revenues is not enough with a national debt approaching $1 trillion.

The $1.9 billion is expected be gained over a four-year period with the probability that organisations adept at avoiding or minimising tax obligations will continue to do so. And the financial costs and legal fees incurred in a tax squeeze on multinationals has to be taken into account. Couldn’t we just see a “trickle down” sum in tax revenue arising from Labor’s hairy-chested election promise?

There are more responsible budgetary steps to take rather than backing that horse to hit the winning post.
Des Files, Brunswick

Things have changed
The current beat up about the possibility of the federal government at least modifying the tax cuts legislated in the previous government’s term – tax cuts that will substantially benefit those that don’t need them – mystifies me.

Sure the then opposition supported the legislation during the term of the previous government – all oppositions make pragmatic political decisions. And now it is being accused of the possibility of breaking an electoral promise when the cost of these cuts will weigh heavily on the economy? Tax cuts that it has now emerged will be funded by borrowing?

Give me a break. Remember the aphorism attributed to Lord Keynes: “When the circumstances change I change my mind. What do you do, Sir?” Circumstances certainly have changed this year.
So, Anthony Albanese, bite the bullet and make the right decision.
Bob Malseed, Hawthorn

Labor in the driver’s seat
You report that “Caucus members unwilling to be named cited the debate over the carbon tax a decade ago as proof of the cost of breaking a promise” (“Ministers reject quick backflip on tax cuts”, The Age, 6/10).

They should wake up to the present. Any government accelerating ahead with its eyes fixed firmly on the rear-view mirror is a recipe for disaster. That’s especially so in negotiating the sort of rocky, post-pandemic economic road Australia is now on.

Labor is in the driver’s seat and needs to take proper control.
Lawrie Bradly, Surrey Hills

It’s like a contract
Your correspondent (“We all know where the money has to come from”, Letters, 7/10) asks why we give such weight to election promises.

Election promises are the job interview of politicians. A person lying about their qualifications, who gains a job by lying, can face criminal charges relating to deception.

A politician making pledges during a campaign is not only interviewing for a job, they are entering into a contract with the electorate where they are making a promise in consideration for you voting for them. They, in effect, have entered into a binding contract.

Saying that politicians regularly lie is no excuse to allow for further lies – “expect nothing, and you will never be disappointed” may be okay for some, but I expect better. Labor made a promise, and any change makes that promise a lie.

It is that simple.
Douglas Potter, Surrey Hills

Keep us in the loop
With the federal government carefully considering the fairness of tax cuts (“Treasury asked for new estimate on tax pledge”, The Age, 8/10), one hopes the next budget will be fiscally responsible. As it should be.

Governments should always spend taxpayers’ money wisely but with the higher cost of living affecting all of us, now it is even more crucial. Interest repayments on Commonwealth debt will increase sharply, so infrastructure projects must be rigorously assessed.

The Suburban Rail Loop, the largest infrastructure investment in Victoria’s history, will be funded by the state government, the federal government and private investment. It will be interesting to see whether the Albanese government thinks the Suburban Rail Loop is worthy of extra funding. Prior to the election it had committed $2 billion, which is far short of the $10 billion Bill Shorten had committed during the 2019 federal election campaign.

With the costs of SRL spiralling, and many independent agencies reporting the business case does not stack up, Victorians need to know where the money is coming from for this project, particularly if there is a shortfall in federal funding.
Yvonne Bowyer, Surrey Hills

It was a wise choice
The fiasco at Essendon has exemplified very clearly the contradictions and discrepancies inherent in any situation where faith issues and the demands of a public, responsible (and highly paid) executive position meet head on.

If a person of faith experiences an existential conflict because their secular occupation is inconsistent with their belief system, that is a personal problem and dealing with it is a personal responsibility. Others have rights for their views to be respected as well. This is fundamental.

In the circumstances, Andrew Thorburn’s choice to give up the CEO position at Essendon was a wise one, but it does not make him a hero or a martyr. The views espoused by the City on a Hill Church on homosexuality and abortion are neither heroic nor respectful.
Julie Hopper, Saint Helena

A matter of choice
Anti-discrimination laws should protect those who have no choice about their being. One cannot choose to be male/female, straight/gay, able/disabled and so on.

Religious affiliation is a choice and if your chosen religion espouses views that are opposed to an organisation’s, that organisation has every right to consider whether or not you are suitable to be within it.
Claude Tomisich, Pascoe Vale South

Michael Bachelard sends an exclusive newsletter to subscribers each week. Sign up to receive his Note from the Editor.