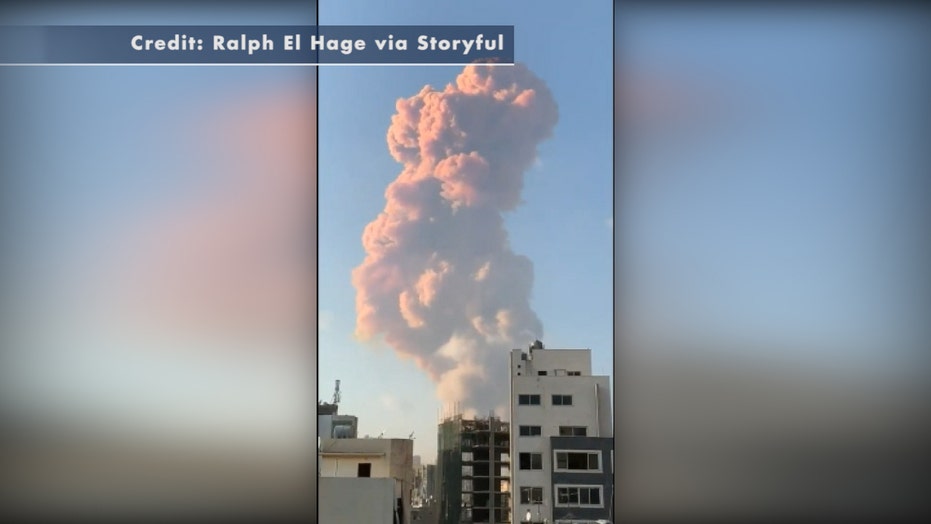 A series of massive explosions rocked Beirut's port on Tuesday – a mushroom cloud rising above the widespread destruction that claimed the lives of at least 60 people and wounded hundreds more in the Lebanon capital.

While the cause of the blast has not yet been determined, preliminary assessments – according to intelligence officials in the region and the United States – as of Tuesday afternoon pointed to the disaster as accidental.

Even so, some have not ruled out more sinister origins pertaining to what was going on at the critical port, and what was being stored there. 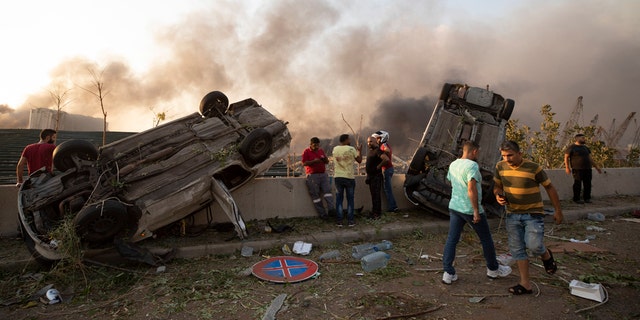 Aftermath of a massive explosion is seen in Beirut, Lebanon, Aug. 4. Massive explosions rocked downtown Beirut on Tuesday, flattening much of the port, damaging buildings and blowing out windows and doors as a giant mushroom cloud rose above the capital. Witnesses saw many people injured by flying glass and debris.
(AP)

Multiple sources said that much of the operations were under "unofficial" control of Hezbollah and indications have emerged that a fire broke out at an explosives depot inside the facility. Several sources also pointed to organized crime operations run out of the port, primarily controlled by Hezbollah, and that the explosion potentially involved "multiple containers" but was not terror-related.

"There is a possibility that fireworks, petrol and weapons were stored together," another intelligence source noted. "Officially, the blast happened at the fireworks and petrol warehouse." 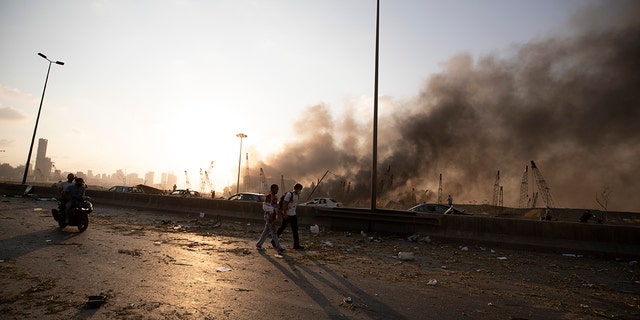 A smoke from a massive explosion is seen in in Beirut, Lebanon, Aug. 4. Massive explosions rocked downtown Beirut on Tuesday, flattening much of the port, damaging buildings and blowing out windows and doors as a giant mushroom cloud rose above the capital. Witnesses saw many people injured by flying glass and debris.
(AP)

The source also stressed that, based on video analysis of the blasts, there were small explosions right before the second – the largest. The variations in color also indicate that there were fireworks involved, but it has not been ruled out that other potential weapons and materials were also in the vicinity.

Ian Bradbury, president of the Canada-based defense consultancy Terra Nova Strategic Management, pointed out that the heavily-damaged port serves as the central shipping hub for the country, and is operated by Gestion et Exploitation du Port de Beyrouth (GEPB), with container operations subcontracted to a company named Beirut Container Terminal Consortium (BCTC). The port is considered one of the largest and most active in the Mediterranean.

"The importation of fireworks is common, and the area seen in the video shows a known storage location for this type of goods," he continued. "There is some speculation concerning weapons shipments previously received or stored within this sector of the port, but as of now, unconfirmed." 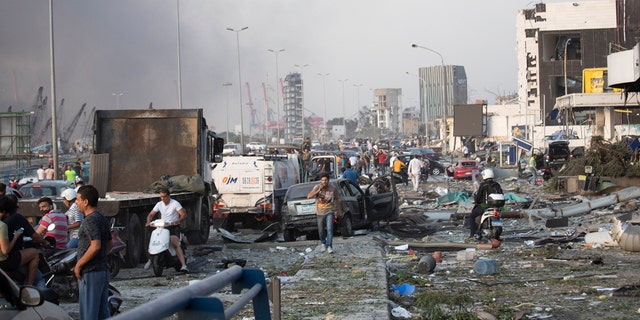 People evacuate wounded after of a massive explosion in Beirut, Lebanon, Tuesday, Aug. 4, 2020. Massive explosions rocked downtown Beirut on Tuesday, flattening much of the port, damaging buildings and blowing out windows and doors as a giant mushroom cloud rose above the capital. Witnesses saw many people injured by flying glass and debris.
(AP)

Adding to the murky narrative, Maj. Gen. Abbas Ibrahim, the head of Lebanon's General Directorate of General Security, also said in an immediate televised interview that a container was the source of the initial fire and explosion. The container had on board confiscated "high explosive materials," including sodium nitrate. As a result, he noted, it would be "naive to describe such an explosion as due to fireworks."

Nonetheless, the disaster has propelled Hezbollah into the limelight once again. For months, Lebanon has been deemed a growing flashpoint for geopolitical tensions, not only due to the Iran-backed group's nefarious activities in the region – from Yemen to Syria to Iraq – but the discord simmering within the small nation itself.

"Currently, it appears that the explosion in Lebanon was not the result of a military strike," surmised Jonathan Schanzer, senior vice president at the Foundation for Defense of Democracies (FDD). "For now, this explosion appears to be the result of ineptitude. But the ongoing tensions make it clear that future explosions may be the result of something more deliberate. These tensions also come at a particularly bad time for Lebanon."

A new report released by FDD suggests that Lebanon's financial crisis is so deep that it will require an estimated $93 billion to mitigate.

In the hours leading up to the explosion, according to local reports, a swell of anti-government protesters tussled with security forces outside the ministry of energy as the economic woes for citizens worsen.

Retired Air Force Lt. Col. Rudolph Atallah, now chief executive officer of White Mountain Research, and former counterterrorism expert in the Office of the Secretary of Defense, noted that anxieties inside Lebanon have skyrocketed over the past months, along with increased opposition to Hezbollah's grip.

"People are seeing that the food and aid supply coming in for coronavirus is being sold on the black market by them or going into Syria because Hezbollah has such a vested interest there," he explained. "And the disinformation since the explosions has been crazy, with text messages sent around warning people to stay in their homes. Hezbollah doesn't want protests, and it doesn't want the Lebanese speaking out against them."

Furthermore, Tuesday's tragedy took place just three days before a United Nations tribunal is expected to issue a ruling with regards to the 2005 assassination of former Lebanon Prime Minister Rafic Hariri, of which four alleged Hezbollah members stand accused of its plot and execution. Supporters of the terrorist outfit have purported to squash news of the trial and dismissed it as being biased.

Tajuden Soroush, a journalist at the London-based Iran International TV, also told Fox News that one high ranking Kataeb Hezbollah – the notorious Iran-backed militia known for extreme violence in Iraq – is believed to have been killed so far in this incident. 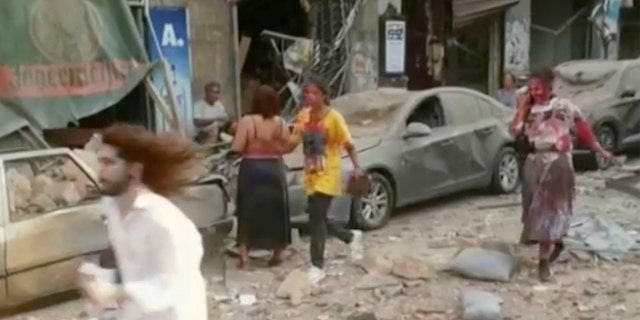 In this frame from video people walk down the street after an explosion in Beirut, Tuesday, Aug. 4, 2020. Explosions rocked Beirut, inflicting many injuries and damaging buildings in a large radius around the city’s port. (AP Photo)

Nonetheless, theories were quick to sweep the Internet pertaining to Israel as the force behind the explosions – perpetuated further by cross-border conflicts this week between Israeli forces and Hezbollah. However, multiple Israeli officials denied any involvement.

Jim Phillips, a senior research fellow for Middle Eastern affairs at The Heritage Foundation, underscored that on Monday, the IDF announced that it had foiled an attempt to infiltrate Israel's border with Syria to plant explosives – a suspected Hezbollah operation – and it retaliated by striking targets in Syria. Earlier Tuesday, Prime Minister Benjamin Netanyahu warned Hezbollah and other terrorist groups operating in Syria that Israel would not hesitate to take further action if needed.

Yet multiple powers are seemingly turning toward the area for their own purposes, cementing it as something of a future hot zone, experts warn.

"Over the last few months, there has been a steady buildup of arms from Iran and China as part of a concerted effort by Iran to consolidate its footholds in Lebanon and Syria," added weapons defense analyst John Wood. "Clearly, the plot thickens; the only thing we can be sure of is that these events will push Lebanon into further political and economic chaos, at a time when the nation is already on the brink of collapse."