A young boy has been taken to hospital with a head injury after being struck by a falling tree branch in Sydney’s north-west on Monday night, as strong winds continue to batter major parts of the state.

Struck in West Pennant Hills about 7.30pm, the boy was rushed to Westmead Children’s Hospital by road in a serious condition. Early reports suggest he had to be placed in an induced coma due to his injuries, NSW Ambulance said. 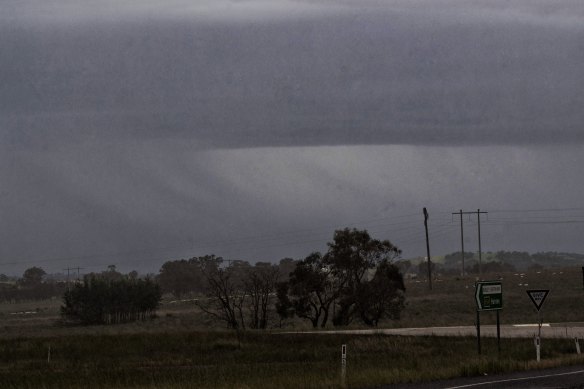 Thunderstorms build over the Riverina region of NSW near Yass on Monday evening.Credit:Nick Moir

The boy’s age was not immediately known.

The Bureau of Meteorology has warned damaging winds of up to 65km/h are set to persist throughout Tuesday morning from the Southern Tablelands all the way to the Mid North Coast as a “vigorous” cold front makes its way eastwards across northeastern NSW.

The weather system has already caused wind gusts of 63km/h to be recorded in Sydney. The NSW State Emergency Service has urged residents across the state’s coastline to move vehicles away from trees and to secure loose items around their homes.

“Saturated soils in the east bring an increased risk of gusty winds toppling trees and powerlines,” the emergency service warned.

Heavy rainfall in parts of the state on Monday night caused fresh evacuation orders and warnings to be issued by the State Emergency Service.

At 8.34pm on Monday, residents in Cootamundra in the state’s South West Slopes were told to prepare to evacuate before properties along the Muttama Creek were told to leave immediately at 9pm.

Just after midnight, residents in parts of Boorowa near Cootamundra were also told to prepare to evacuate as the Boorowa Dam began to flood.

A bit further south in the Riverina region, residents in Adelong were told to evacuate immediately due to flash flooding about 1.30am.

Residents in Willow Bend were also told to evacuate at 2.30am, while a flood warning was issued for Tamworth about 6.30am on Tuesday.

In Melbourne, it’s forecast to be just 14 degrees with possible hail storms on Tuesday. It will potentially be the coldest Melbourne Cup day since 1995, the Bureau of Meteorology said.

Speaking on the ABC’s News Breakfast program, state Greens MP for Melbourne Ellen Sandell said today would be difficult for the 100 or so people in Melbourne’s inner northwestern suburbs who last month had their homes flooded while the nearby Flemington Racecourse remained dry.

“People around here in Maribyrnong and where I live, in Kensington, are still pretty upset the Flemington Racecourse got to protect their property at the expense of people’s homes. One hundred people had their homes flooded, we’ve had hundreds more lose cars and other property,” she said.

“And I think watching revellers come to the Melbourne Cup will be pretty hard for those people who lost everything.”