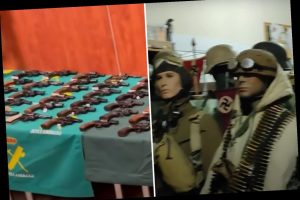 A GANG of ‘Hitler fanatics’ led by a Brit and two Germans that allegedly supplied guns to drug traffickers has been broken up by cops.

Footage shows the moment authorities raided properties in Spain and discovered weapons of varying calibres, as well as a disturbing display of Nazi memorabilia.

The homes targeted in Malaga were those of three men who have been arrested under charges of belonging to a criminal group, trafficking and storing arms, trafficking munitions, trafficking drugs and falsifying documents.

One of the suspects is reported to the British.

Spanish Civil Guard agents busted the trio – including two Germans – and uncovered a large number of weapons in the operation as well as munitions stored away in different parts of the properties.

During the raids, cops found a 'museum' of Nazi memorabilia, including medals, helmets and guns.

The end of the video also shows the moment agents safely discharged an explosive device.

In total, police discovered an arsenal of 160 firearms, featuring 22 assault rifles and eight automatic weapons, as well as 9.967 rounds of different calibres, eight silencers, 273 magazines, and a grenade with 1.5 kilos of military-grade explosive.

The gang had reportedly been operating for three years, and is believed to have obtained weapons from Eastern European countries before selling them onto drug-trafficking groups.

Cops believe the British suspect brokered the deals with such groups, and went to extreme measures such as using fake passports to avoid being caught.

One German suspect is thought to have been in charge of storing the weapons in a warehouse he rented where they were packaged ready for distribution, while the other used machinery to tamper weapons.

Police in Germany had a warrant for the arrest of the weapon-storing suspect over an arsenal of guns found in Hannover.

He also owned an unsettling collection of Nazi paraphernalia that was disaplyedin his home and warehouse, and is reported to be a neo-Nazi affiliated with Nazi movements and extreme-right groups.

Police say the Civil Guard began their operation sometime last year after an increasing number of violent crimes related to theft of drug merchandise were registered.

The two area impacted by the score-settling between crime groups in Andalusia were the Costa del Sol and Camp de Gibraltar.

The suspects were arrested andplaced under the custody of Information Headquarters from the Spanish Civil Guard.

Their current legal status, however, is unclear.