A further 52 coronavirus deaths have been announced in the UK’s early count this afternoon, with 43 in England, seven in Scotland, one in Wales and one in Northern Ireland.

The numbers add to evidence that the death count is continuing to grow as cases surge, but the daily average remains 95 per cent lower than it was at the peak.

The seven fatalities in Scotland are its highest one-day increase in more than three months, since there were nine announced on June 17.

A full round-up of the whole UK’s fatalities and new cases is expected from the Department of Health later this afternoon.

Prime Minister Boris Johnson is expected to hold a television briefing at 5pm today to impress on the nation the importance of following social distancing rules.

Mr Johnson is facing backlash against the use of his chief medical advisers Professor Chris Whitty and Sir Patrick Vallance, who are also set to appear in the briefing, as ‘scientific propaganda’ to justify tough social distancing rules.

Cases have this week hit an average of 6,087 per day with 7,143 confirmed yesterday.

Positive tests are now higher than they were even at the peak of the crisis but this is because 10 times as many tests are being done, not because the outbreak is bigger. 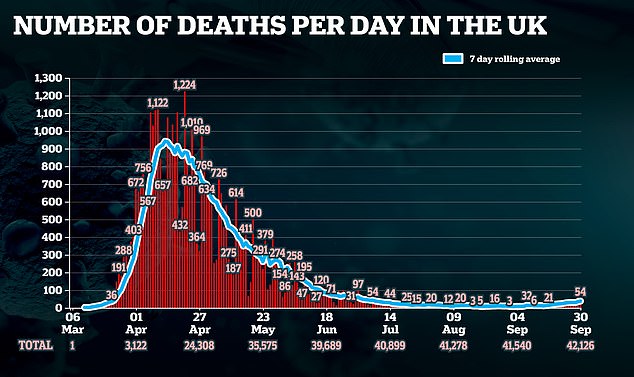