A British-Egyptian pro-democracy activist imprisoned in Cairo has ‘deteriorated severely’ after seven months of a hunger strike and came close to death, his family have revealed today.

Writer Alaa Abd El-Fattah, 40, is in Wadi El Natrun prison in Cairo, where he has been incarcerated for most of the past decade.

Having been on hunger strike for more than 200 days, he stopped drinking water on November 6, to coincide with the first day of the COP 27 conference in Sharm-el-Sheikh.

He was forced to stop his hunger strike this week after he fell unconscious and collapsed, but his family say he feels he may have no choice but to return to it in the coming days.

The activist was sentenced to five years in jail in December on charges of spreading fake news after he retweeted a claim in 2019 that another prisoner had died. He has been in prison for most of a decade, being arrested in the aftermath of a military coup in 2013.

His family have called on the government to intervene in Mr Abd El-Fattah’s case, placing pressure on PM Rishi Sunak who is understood to have raised it with President Sisi at COP 27.

But in a statement released on social media today they said no progress had been made and the hunger and thirst strike had nearly killed him. They added he appeared ‘exhausted, weak and vulnerable’, and that before he ceased his strike he had been self-harming and threatened to take his own life.

It comes after the UN demanded the immediate release of Mr Abd El-Fattah earlier this month, saying his life was in ‘great danger’. 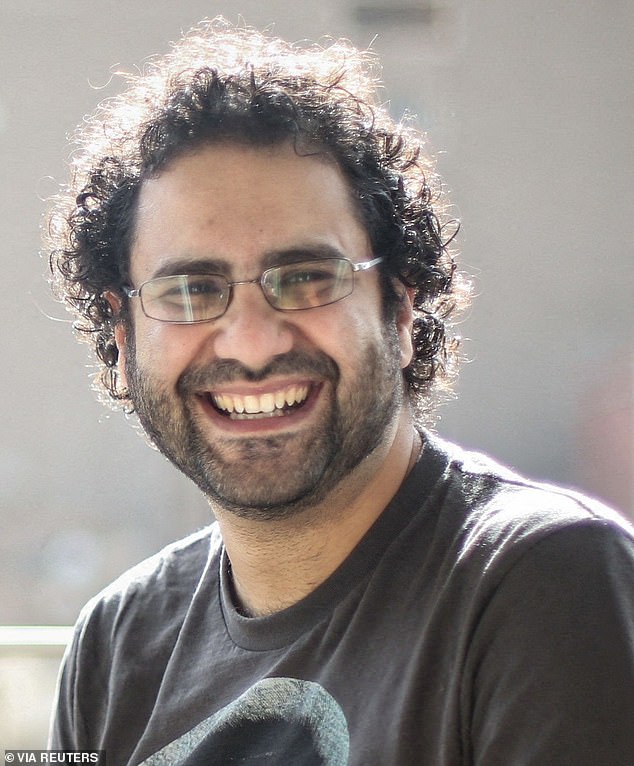 Alaa Abd El-Fattah, 40, is in Wadi El Natrun prison in Cairo, where he has been incarcerated for most of the past decade 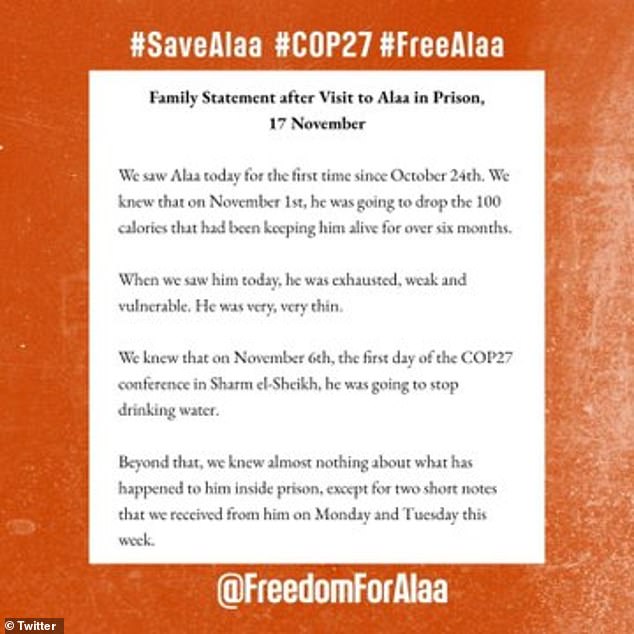 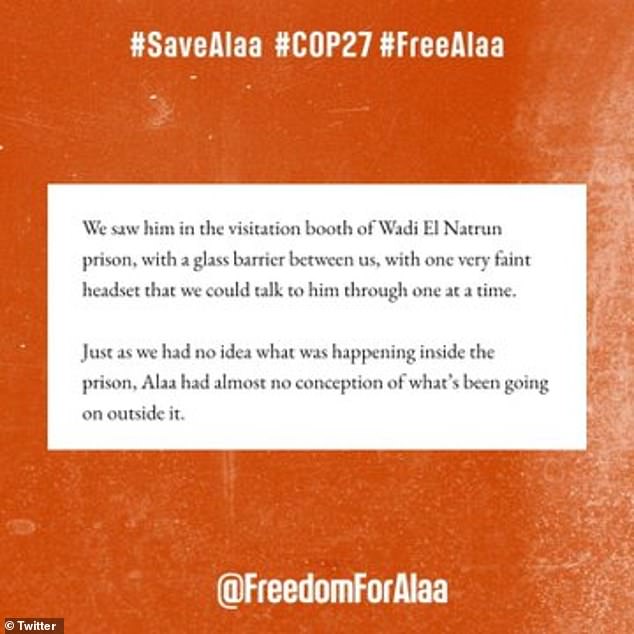 On Thursday evening, the family released an update on Mr Abd El-Fattah’s health after being able to see him for the first time since October 24.

The statement said: ‘When we saw him today, he was exhausted, weak and vulnerable. He was very, very thin.’

Describing today’s visit, his family said: ‘We saw him in the visitation booth of Wadi El Natrun prison, with a glass barrier between us, with one very faint headset that we could talk to him through one at a time.

‘Just as we had no idea what was happening inside the prison, Alaa had almost no conception of what’s been going on outside it.’

Last Friday, Alaa’s condition is said to have become so bad that he collapsed in the shower, before trying to dress himself but falling once again and becoming unconscious.

When he awoke, he was ‘surrounded by people’ including a cellmate, who was supporting his head, and he had a cannula fitted so he could be given medical treatment.

His family added: ‘He talked about all of this as a near-death experience. This is how the hunger strike was broken.’

They added: ‘He had thought that he would go straight back to hunger strike, but he decided not to, to give his body a small break, to give his cellmates a small break – he could see the effect his ordeal was having on them.’ 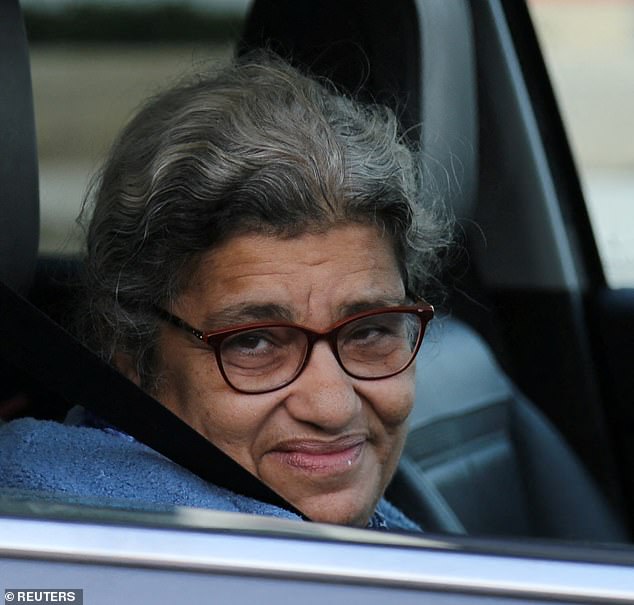 Laila Soueif, mother of Alaa Abd el-Fattah, saw her son today for the first time in more than three weeks

On Monday Mr Abd El-Fattah began to eat again and was allowed a music player so he could hear music for the first time in three years.

His family said: ‘He felt alive again. And today we saw him. He was very thin, very frail, but was happy to be back with his family for a moment.’

But they also criticised the Egyptian authorities: ‘There have been no negotiations with the authorities, and no promises have been made. He has been completely in the dark as to what’s happening in the world outside.

‘We tried to tell him about as much as we could of the global wave of solidarity we’ve been witnessing.

‘Alaa said: “Any form of political organising that may solve our global crises has to stem from personal solidarity. Like this.”

‘We hope that the incredible global attention on Alaa’s case and the tens of thousands of people who are now standing by him will lead to his release.

‘Alaa came close to death inside, but decided to reach for life. He will have no choice but to resume his hunger strike imminently if there continues to be no real movement on his case.

‘The campaign for Alaa’s release will continue with all the same strength for him. He needs it now more than ever.’

Earlier on Thursday, his sister Mona Seif shared a photograph of their mother, Laila Soueif, in the waiting area of the Egyptian prison ahead of seeing her son for the first time in more than three weeks.

Alongside the photo, Ms Seif said: ‘The past two weeks seemed like a lifetime on their own: water strike, no communication or info, needing a proof of life.

‘I am glad she will finally see him.’

Amnesty International has called on the Government to take the case of imprisoned pro-democracy activist Alaa Abd El-Fattah ‘much more seriously’.

The charity said ‘nothing appears to be happening’ to free him.

Freshta Sharif, a campaign manager at Amnesty International UK, said the Government is failing to make progress on the urgent case despite Prime Minister Rishi Sunak speaking to Egyptian officials at Cop27 earlier this month.

Speaking about the decline in Mr Abd El-Fattah’s health, Ms Sharif said: ‘It’s distressing to hear this, and it’s yet another reminder that UK ministers have got to start taking Alaa’s fate much more seriously than they’ve been doing up to now.

‘Rishi Sunak raised Alaa’s case with President Sisi a week-and-a-half ago, but nothing appears to be happening on the UK side to show that the Government is escalating its response.

‘Once again, we’re saying that the Prime Minister and others in Government should be insisting on UK consular access to Alaa to check on his perilous condition and to ascertain what independent medical care he needs.’

Ms Sharif added that the Government ‘can and must’ secure Mr Abd El-Fattah’s release and asked it to ‘conduct an urgent human rights impact assessment’ of its trade dealings with Egypt in light of his case and others.

An FCDO spokesperson said: ‘The Prime Minister raised Mr Alaa Abd El-Fattah’s case with Egyptian President Sisi on November 7 and made clear his expectation that the case is resolved swiftly.

‘Our priority is Mr El-Fattah’s welfare and securing his immediate release.’

The department added that it has been providing consular support to Mr Abd El-Fattah’s family and has requested urgent consular access for the prisoner.

Mr Abd el-Fattah rose to prominence during Egypt’s 2011 popular uprising which led to Egypt’s first democratic presidential election. The new Muslim Brotherhood president, Mohamed Mursi, was toppled by the military – then led by Sisi – after mass protests against his rule in July 2013.

Mr Abd el-Fattah, a software developer from an activist family, was detained in the subsequent crackdown on Islamists, leftists and liberals alike, and has been behind bars for most of the time since then.

Some rights campaigners have criticised the decision for Egypt to host COP27, citing what they say is its repression of political dissent. They have also raised concern over access and space for protests at the United Nations climate talks.

Sisi has said security measures were needed to stabilise Egypt after the 2011 uprising.

If you have been affected by any of the issues mentioned in this article, you can call the Samaritans for support for free on 116 123, email them at [email protected], or visit samaritans.org to find your nearest branch.