London: China’s consul-general in the English city of Manchester has been named in UK Parliament as one of the officials involved in the violent scenes showing a Hong Kong refugee being dragged inside the gates of the consulate and beaten in broad daylight. 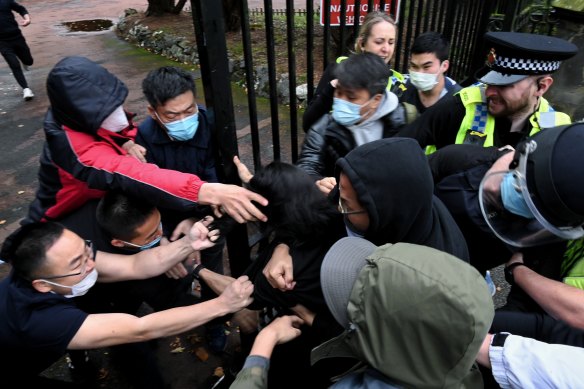 Hong Kong protestor Bob says he was dragged onto consulate grounds and attacked after staff took offence to a poster of President Xi Jinping.Credit:Matthew Leung/ The Chaser News

The alleged attack was captured on video and the man named Bob had to be rescued by Manchester Police but not before he said he was bruised, cut and had some of his hair ripped from his scalp.

The chair of the House of Commons foreign affairs committee Alicia Kearns identified the consul-general Zheng Xiyuan, one of China’s most senior diplomats in the UK, as one of the men who emerged from the consulate in Manchester to disrupt the protest that was taking place outside its gates on Sunday afternoon.

“What we saw was the Chinese consul-general then ripping down posters during a peaceful protest,” she told the House.

“There soon followed grievous bodily harm against Hong Kongers, one of whom was hospitalised for taking part in that peaceful protest. 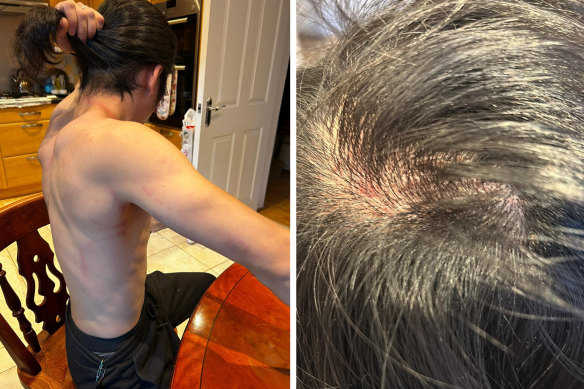 Hong Kong protestor Bob says hair was ripped from his scalp when he was beaten on the grounds of the Chinese consulate in Manchester, England, on Sunday, 16 October, 2022.

“Some were then dragged onto consulate territory for a further beating by officials who have been recognised to be members of the Chinese Communist Party. This is a chilling escalation.”

Kearns and other MPs urged the government to expel those responsible from the UK.

The junior foreign minister Jesse Norman said it was up to the police to establish the facts before any government action.

“It is up to our independent police and Crown Prosecution Service to decide first on the facts of the matter and then on whether a prosecution should be brought,” he said.

More than 48 hours after the incident and this masthead’s inquiries, the foreign office released a statement saying that Foreign Secretary James Cleverly had instructed a senior official to summon the Chinese embassy’s Charge d’Affaires Yang Xiaoguang.

Dan Chugg, the director for north-east Asia and China at the Foreign, Commonwealth and Development Office, met Yang and according to the FDCO’s statement, “reiterated the UK’s commitment to peaceful protest and expectation that all diplomats and consular staff based in the UK must respect the UK’s laws and regulations.”

The Chinese consul-general has not responded to requests for comment.

The Labour MP for Manchester, Gorton, Afzal Khan said he was “sickened” by the event that took place in his electorate.