Brits reveal memories of coming face-to-face with Her Majesty

‘When I met the Queen…’: Brits reveal their memories of coming face-to-face with Her Majesty as they pay tribute following her death

The British public and admirers from around the Commonwealth and world are remembering the moment they met the Queen following Her Majesty’s death at the age of 96.

There has been an outpouring of grief from many including public figures and world leaders online following Buckingham Palace’s announcement this evening.

But some of the most touching tributes have come from the ‘ordinary’ people who met her, with many taking to social media to reminisce about the time they were fortunate enough to have an audience with Queen Elizabeth II.

One BA flight attendant said he was ‘humbled’ to have met the monarch at an event in 2019.

The monarch also met her fair share of athletes, with several posting tributes to her along with photos of the time they met.

Rugby player Will Carling said he ‘was truly honoured to have met the Queen a number of times.

‘She was such an impressive person.’

Neil Back MBE, a former rugby union international footballer for England, thanked the Queen for her years of service, which he said were ‘delivered with grace and dignity’.

Scottish track and field athlete Jamie Bowie posted a snap of his meeting with Queen Elizabeth over 10 years ago.

He captioned it: ‘Incredible lifetime of service to our country, in 70 years as Queen! One was fortunate enough to have met Queen Elizabeth over 10 years ago.’ 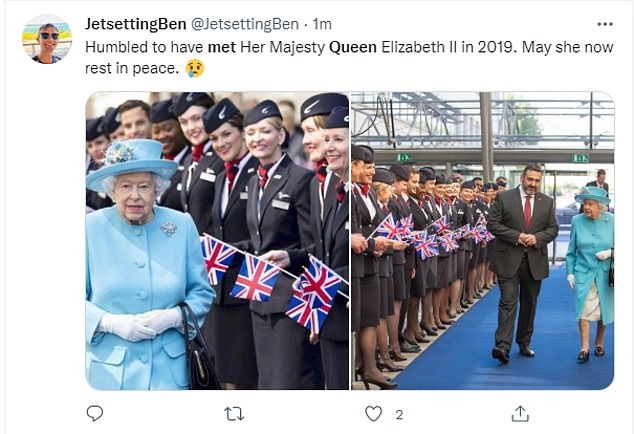 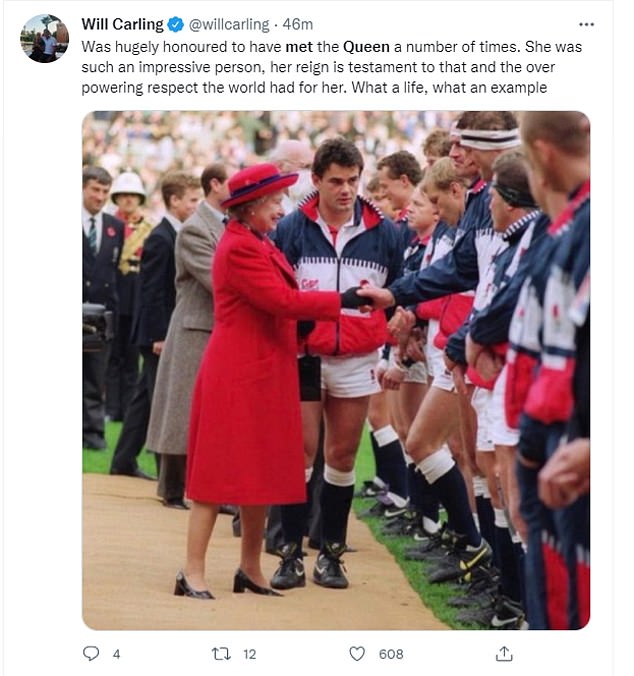 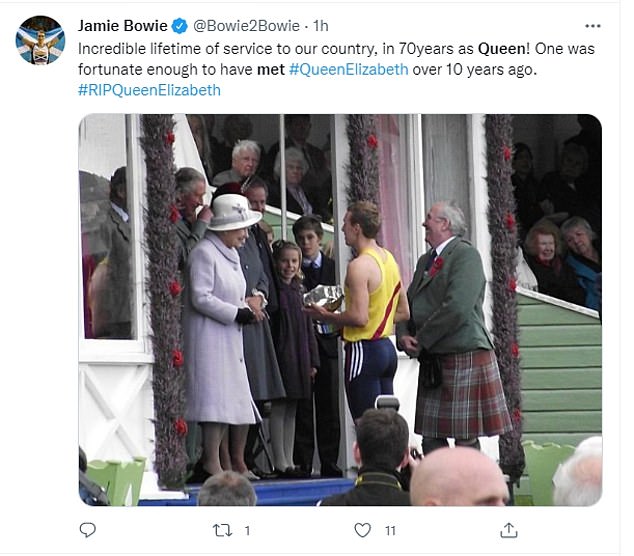 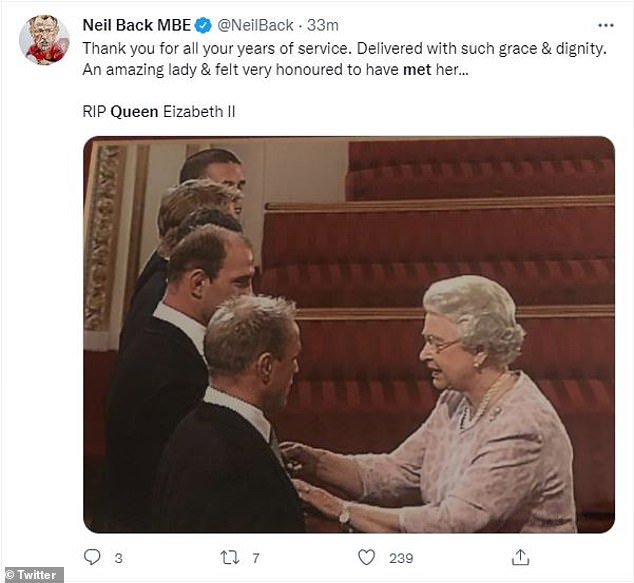 Others were lucky enough to exchange a few words with Her Majesty as they received honours from her.

Food campaigner Mary Long-Dhonau OBE said ‘I feel so privileged to have met our lovely Queen on two occasions. RIP your majesty. You will be missed by so many!’

Writer Catrina McHugh, who founded the Open Clasp Theatre Company, recalled when she was awarded her MBE.

‘When I met the Queen I wanted to hug her, I felt overwhelmed and she reminded me of my aunty Maggie. She was kind.’ 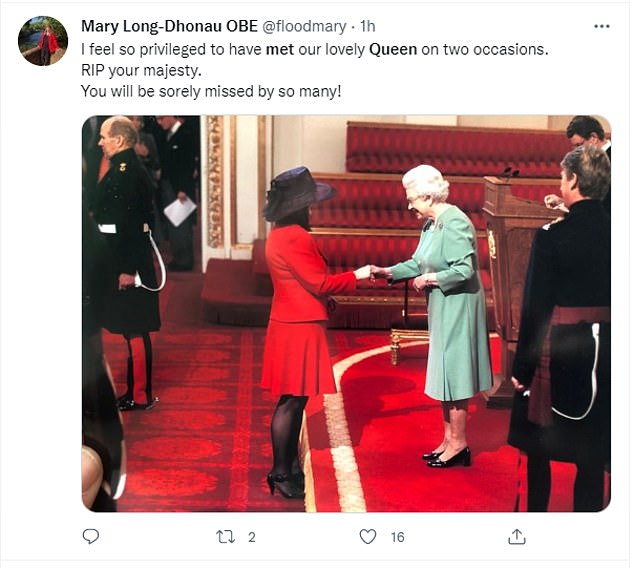 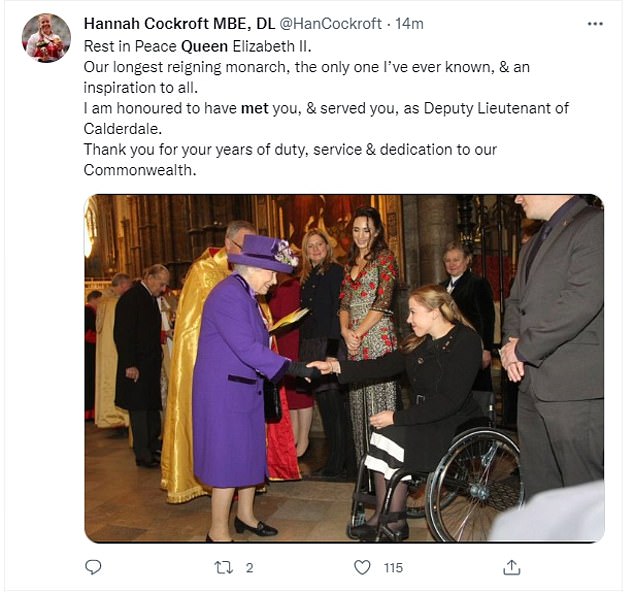 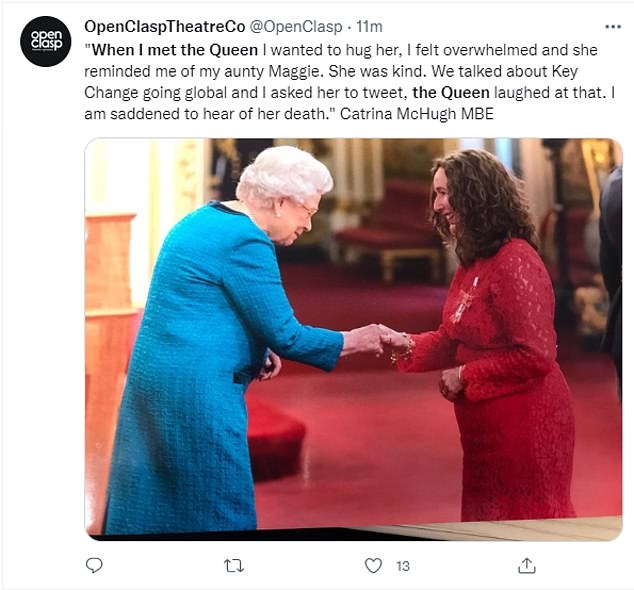 Paralympian Hannah Cockroft posted along with a picture of her shaking the Queen’s hand: ‘Rest in peace Queen Elizabeth II.

‘Our longest reigning monarch, the only I’ve ever know, & and inspiration to all. I am honoured to have met you, & served you as Deputy Lieutenant of Calderdale.

‘Thank you for your years of duty, service and dedication to the Commonwealth.’ 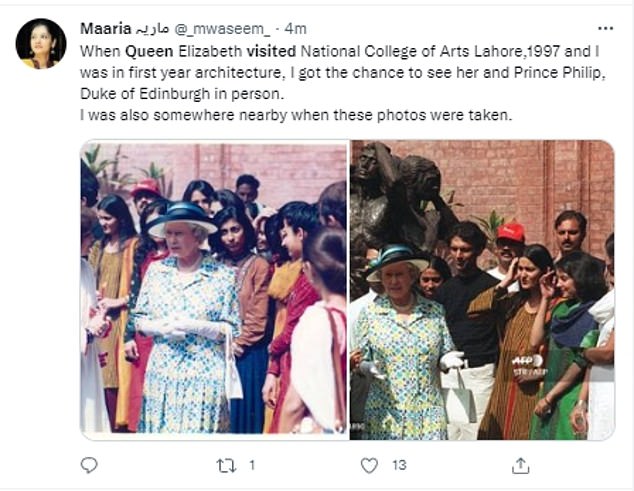 ‘I was in first year architecture,’ she one woman. ‘I got the chance to see her and Prince Phillip, Duke of Edinburgh, in person.’

One woman tweeted pictures from 1997 of the Queen visiting her at the National College of Arts in Lahor.

‘I was in first year architecture,’ she said. ‘I got the chance to see her and Prince Phillip, Duke of Edinburgh, in person.’

Millie Robson was visited by the Queen at Royal Manchester Children’s Hospital after the Manchester Arena attack in 2017.

She was 15 at the time and posted on Twitter today to honour Her Majesty, saying: ‘This moment meant so much to me.’ 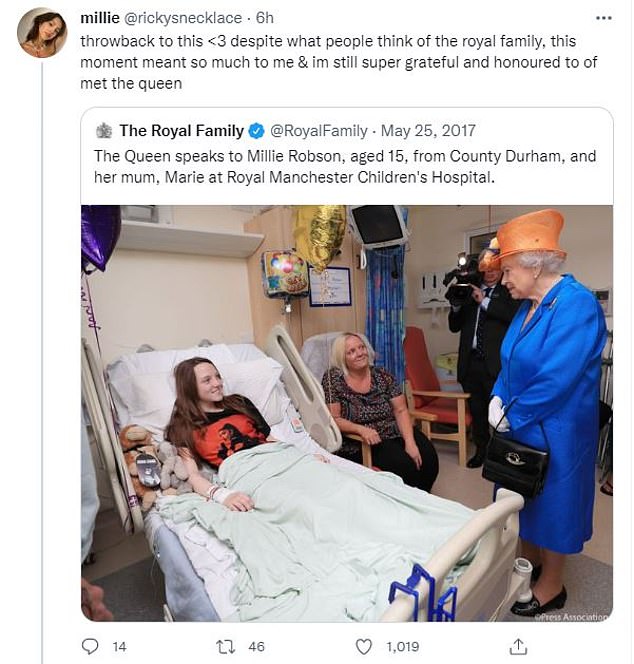 Millie Robson, from County Durham was visited by the Queen in hospital when she was 15. She said today she was ‘grateful and honoured’ by the visit

Tributes poured in after Her Majesty died peacefully at her home in Balmoral surrounded by her family, including her son Charles and grandson William.

The Queen’s death will see Britain and her Commonwealth realms enter into a ten-day period of mourning as millions of her subjects in the UK and abroad come to terms with her passing.

Tributes from world leaders and public figures have come in from leaders around the world.