Football remembers the Queen: Teams across Europe broadcast portraits of Her Majesty as fans observe a minute’s silence and hold Union flags following her death at 96

Football fans throughout Europe have marked the death of the Queen with minute’s silences and applause.

The Queen passed away this afternoon at the age of 96 at Balmoral in Aberdeenshire, hours after Buckingham Palace announced she was ‘under medical supervision’.

Following the death of the longest-serving monarch in the UK’s history, football fans paid their respects by observing a minute’s silence. 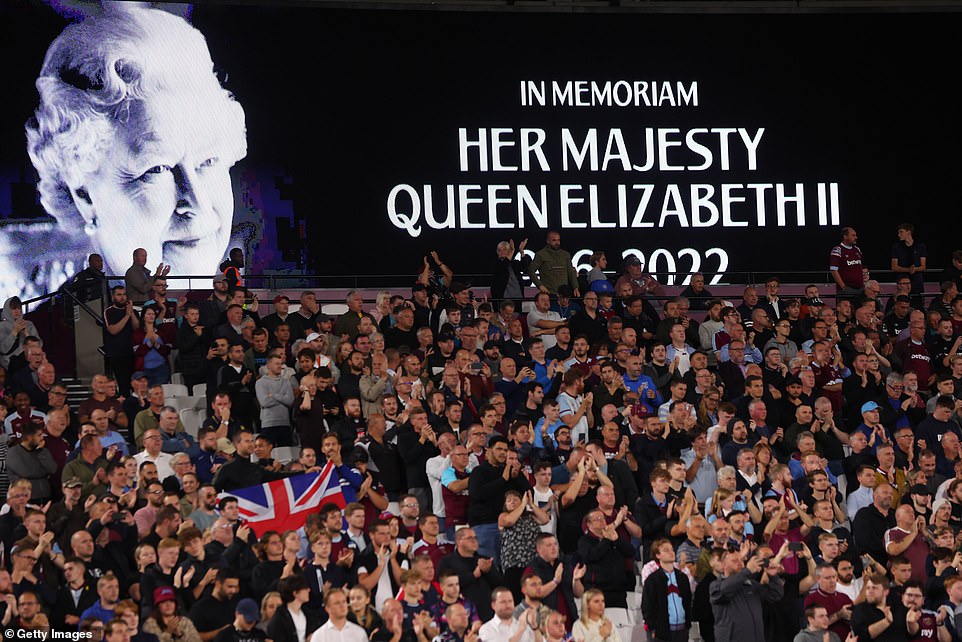 West Ham fans at the London Stadium applauded during a tribute to the Queen as the screens marked her passing, with some in the crowd holding a Union Jack flag 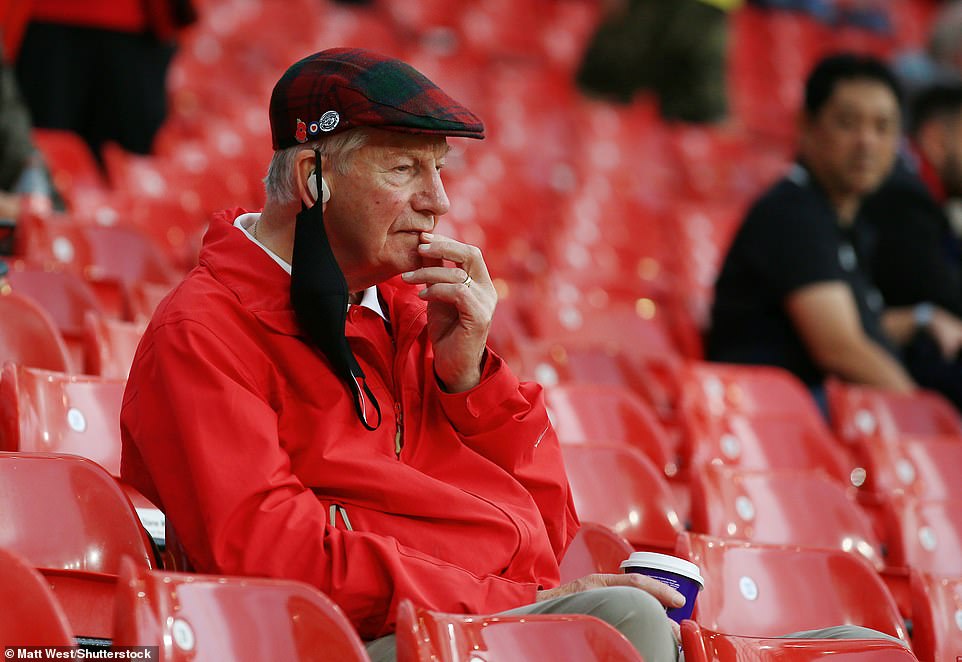 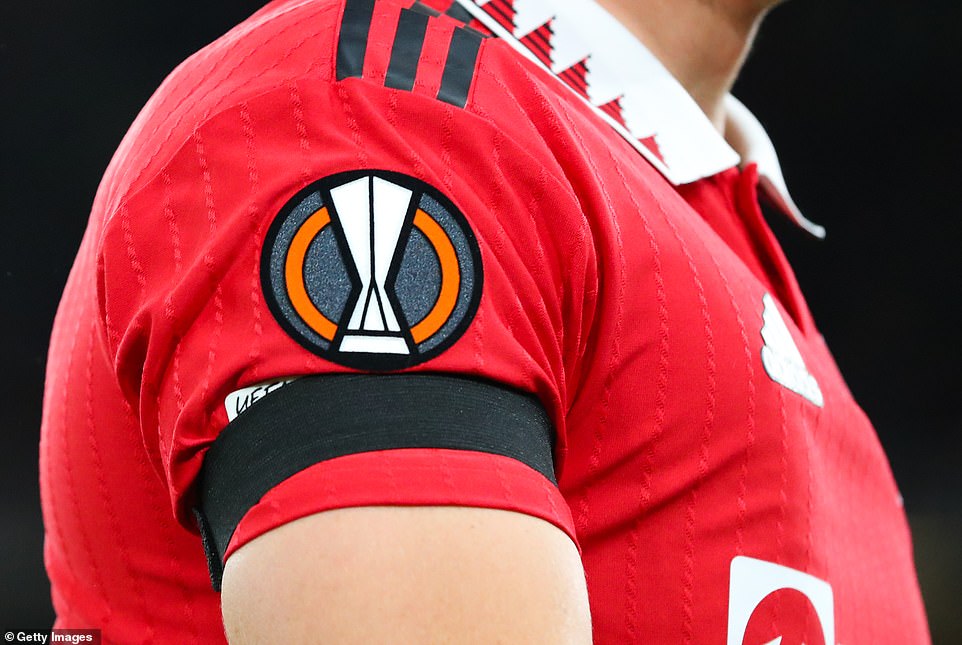 Fans and players stood for a minute’s silence at the Kybunpark stadium, in St. Gallen, Switzerland to commemorate the life of the Queen

Fans watching the West Ham Steaua Bucharest fixture were pictured applauding at the London Stadium while the Monarch’s face was projected on the screens with the words: ‘In Memoriam: Her Majesty Queen Elizabeth II.’

Some fans were pictured holding up a Union Jack flag in memory of Her Majesty, while many applauded and some appeared to tear up as the crowd paid its respects to the Monarch.

As players walked onto the pitch ahead of Manchester United’s Europa League fixture with Real Sociedad, captain Harry Maguire was pictured wearing a black armband to signal mourning. 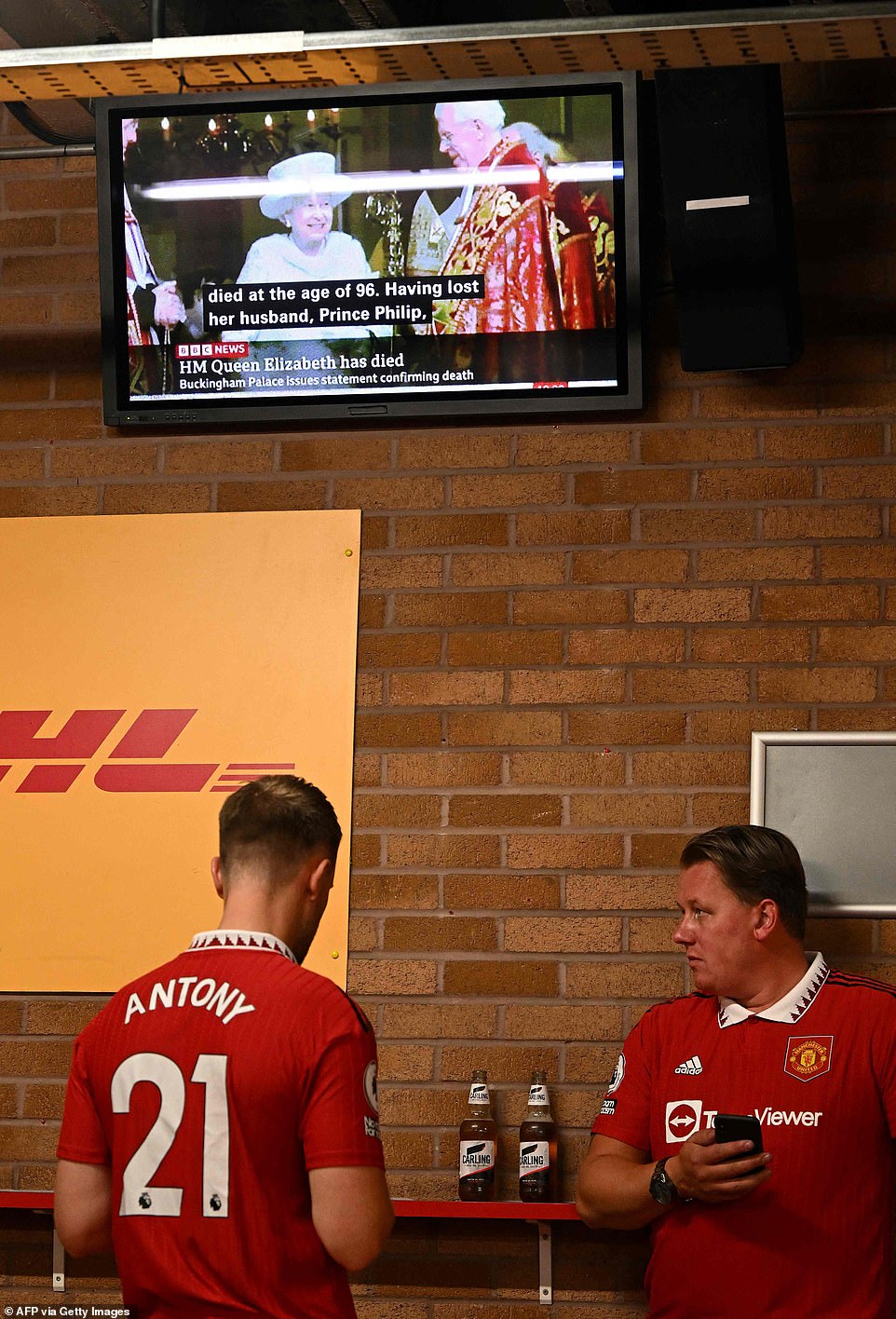 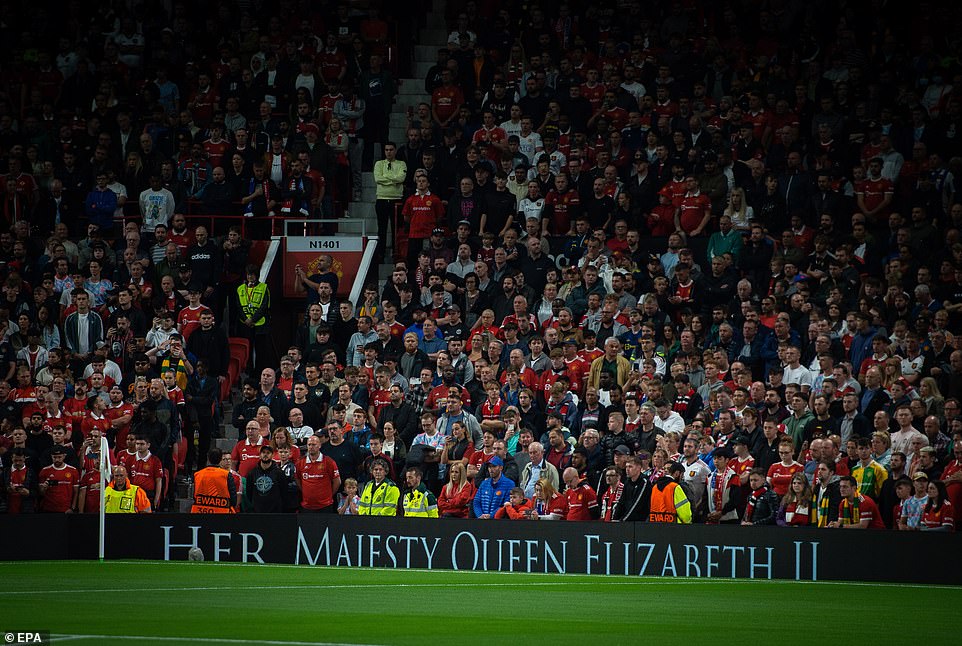 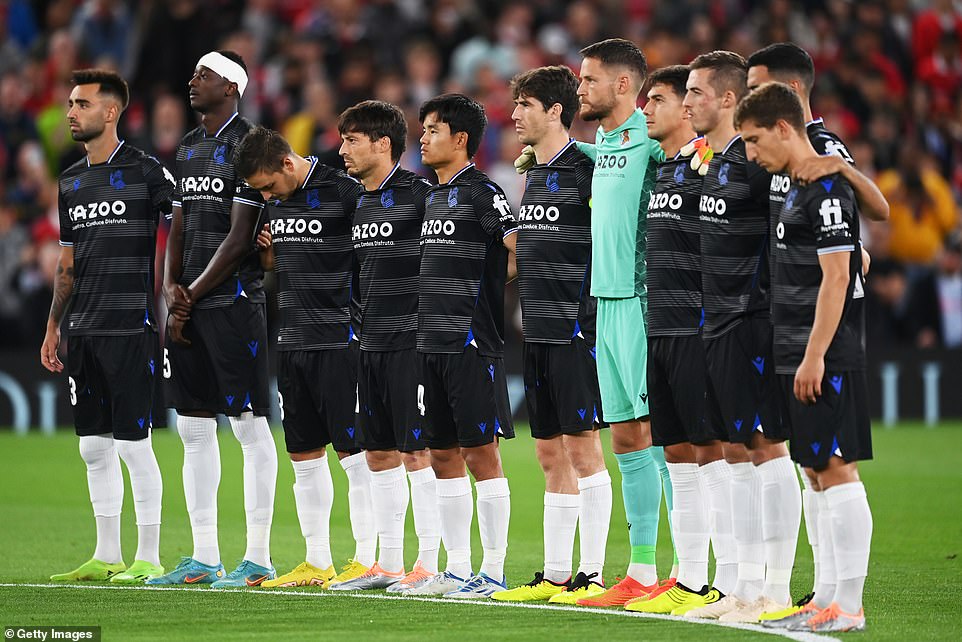 Real Socieded players stood, some with their heads bowed, as they observed the silence ahead of the Europa League match 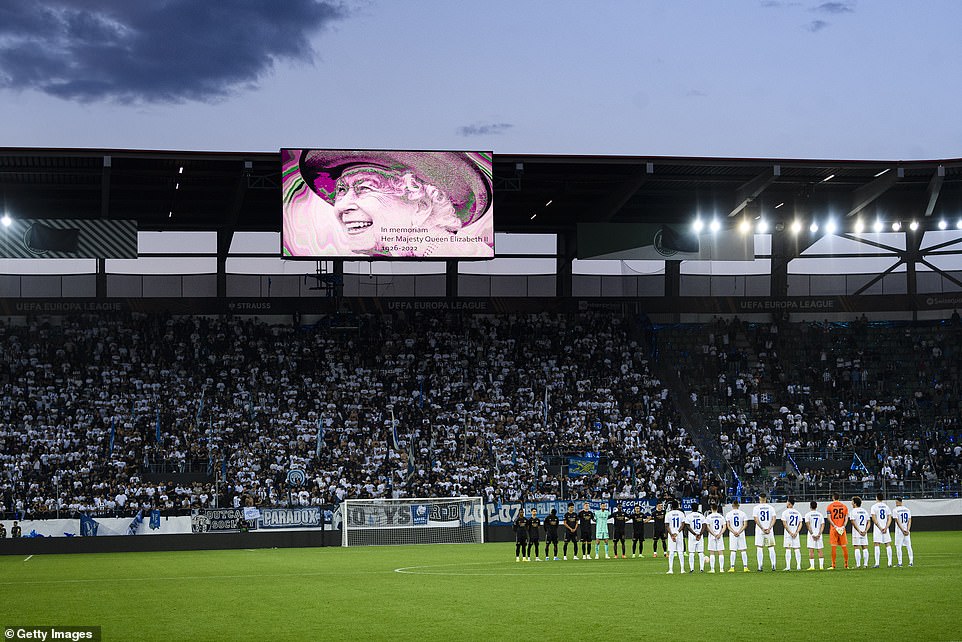 A Manchester United fan was pictured in the stands of Old Trafford before the match looking incredibly sombre. Wearing a poppy pin on his hat to mark support for the armed forces, he put his hand on his face and appeared to be deep in thought.

Across Europe, non-British teams also paid tribute to the longest-reigning monarch in UK’s history, with a photo of the smiling Queen projected onto the screens at Rome’s Olympic stadium ahead of the match between Lazio and Feyenoord.

It read: ‘The Queen died peacefully at Balmoral this afternoon. 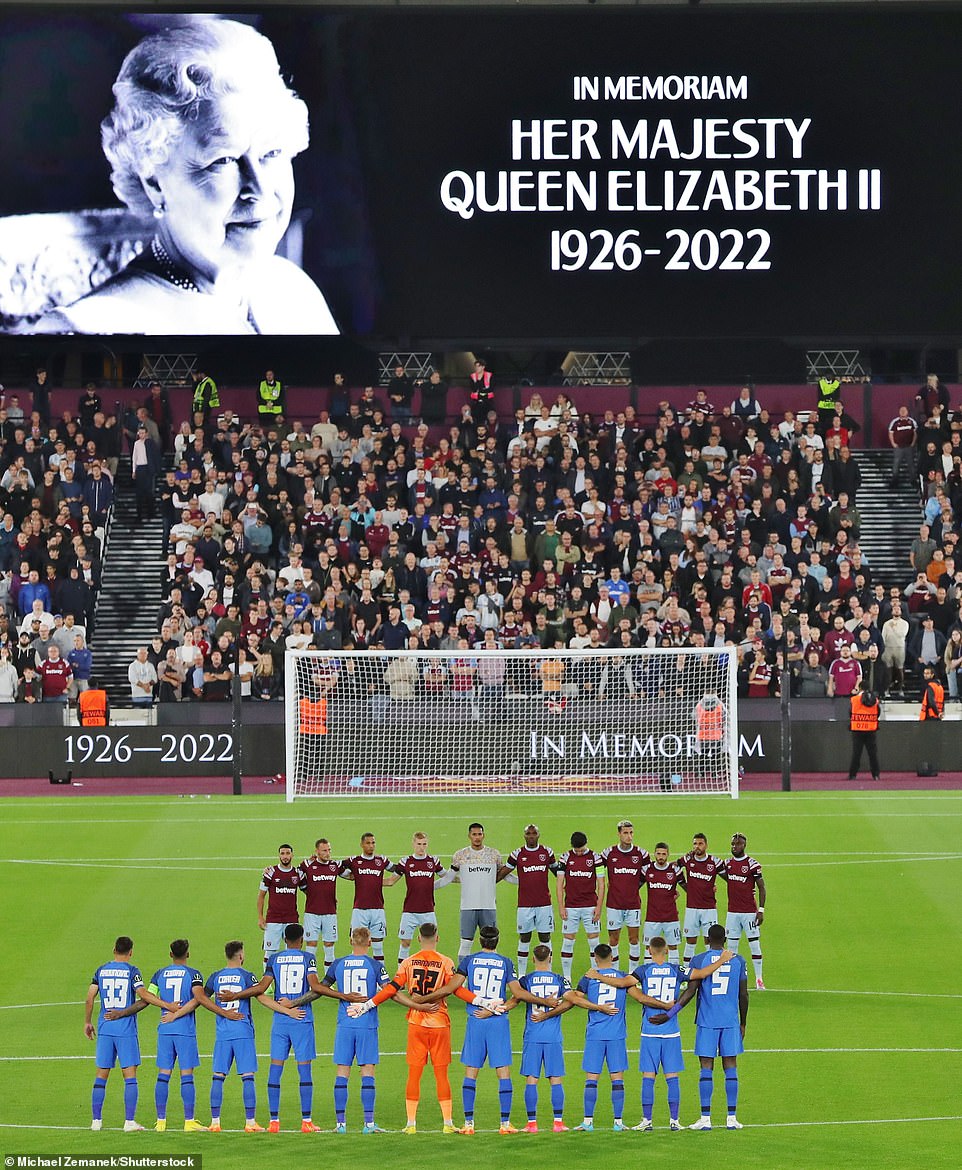 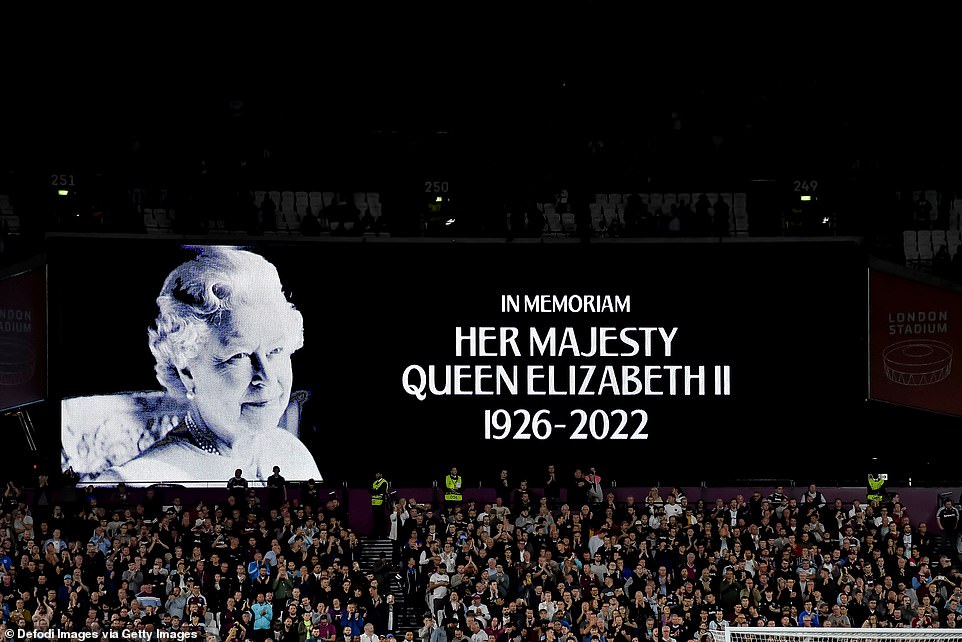 The screen at the London Stadium, usually used to display adverts, tonight displayed the Queen’s face instead with the words: ‘In Memoriam: Her Majesty Queen Elizabeth II 1926-2022’ 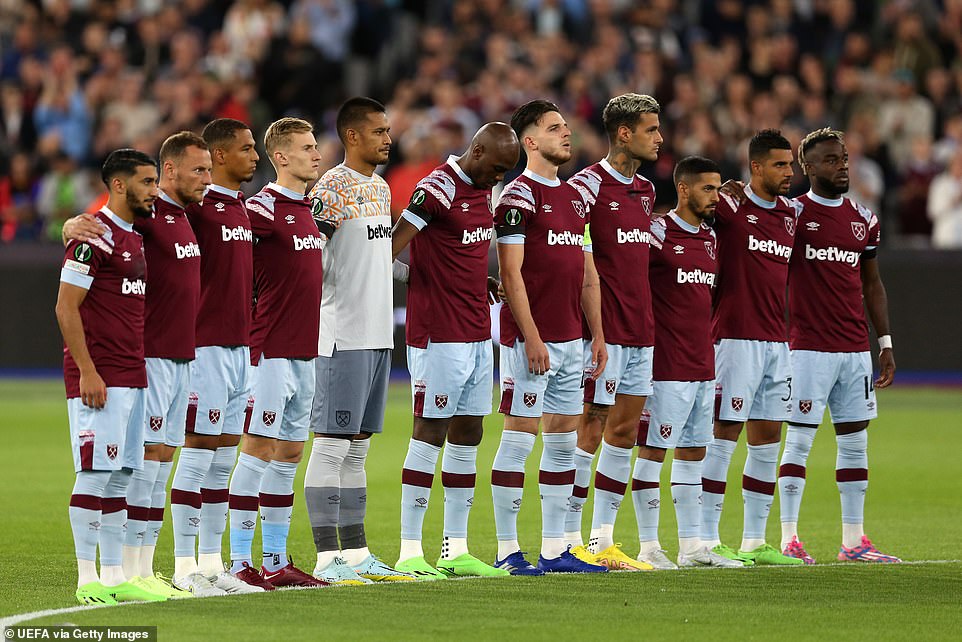 West Ham United players, some with their heads bowed, observed a minute’s silence in memory of the Queen as captain Declan Rice appeared to look emotional 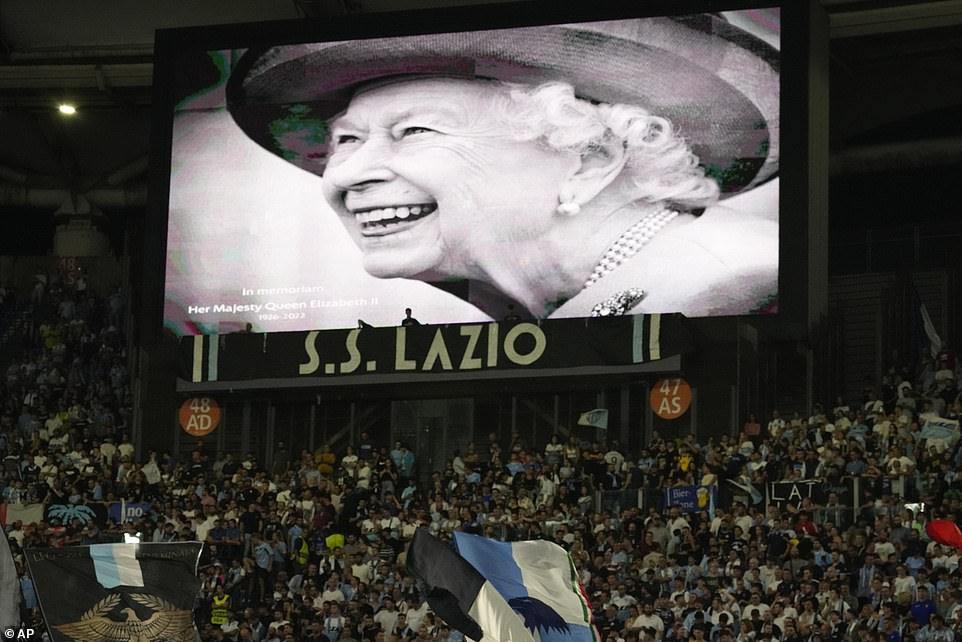 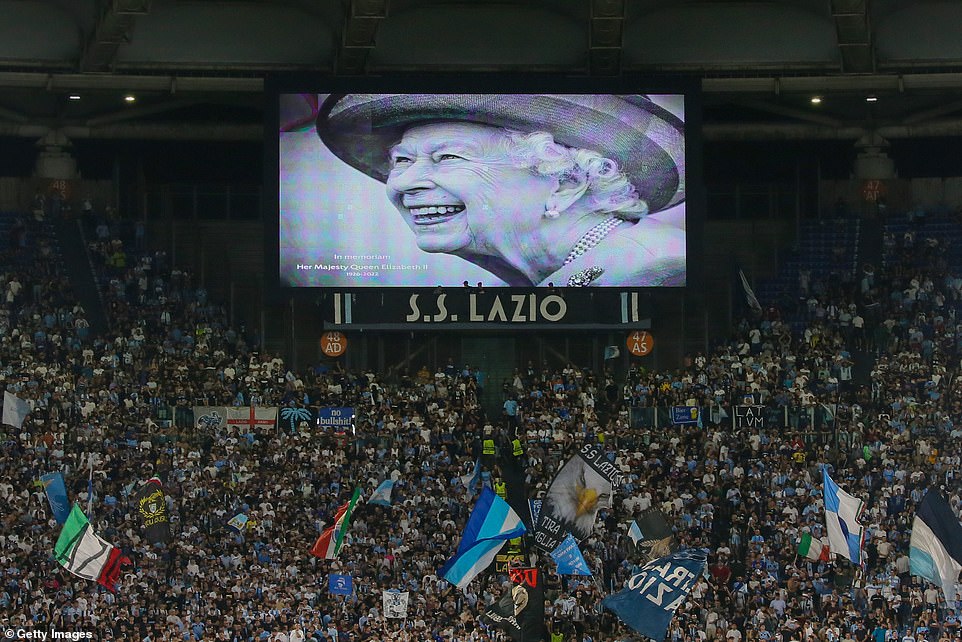 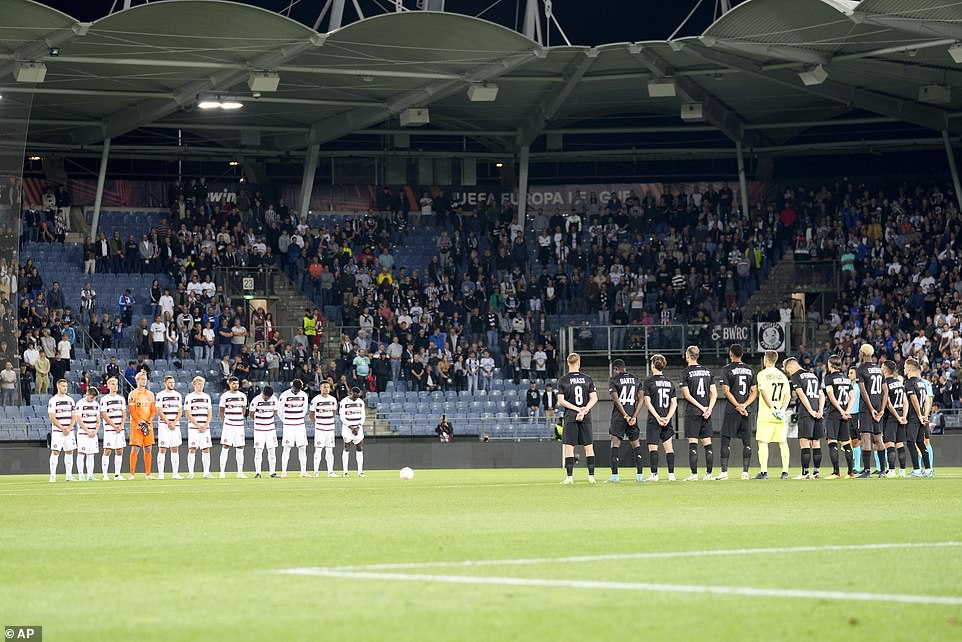 Fans stood up at the Europa League Group F match between Sturm Graz and Midtjylland in Graz, Austria this evening, with players also observing the silence

‘The King and The Queen Consort will remain at Balmoral this evening and will return to London tomorrow.’

Following the announcement, King Charles III, the eldest son of the Queen, also issued a statement.

It read: ‘The death of my beloved Mother, Her Majesty The Queen, is a moment of the greatest sadness for me and all members of my family.

‘We mourn profoundly the passing of a cherished Sovereign and a much-loved Mother. I know her loss will be deeply felt throughout the country, the Realms and the Commonwealth, and by countless people around the world.

‘During this period of mourning and change, my family and I will be comforted and sustained by our knowledge of the respect and deep affection in which The Queen was so widely held.’