Home » Bum puppet PM is the star of Midsumma Festival

Bum puppet PM is the star of Midsumma Festival

And it certainly does what it says on the tin. The show, commissioned jointly by the Arts Centre and Sydney’s Gay and Lesbian Mardi Gras, is part of Melbourne’s queer Midsumma Festival. 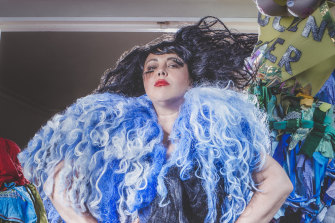 Generating the most buzz is a bum puppetry performance by cabaret act Yana Alana.

The character lies on her side with the face of our prime minister drawn on her posterior, which gives the appearance of the character, nicknamed “Scat Morrison”, talking in unison due to some expertly-timed cheek waggling.

“Everything to do with this show is not gratuitous it’s not nudity for nudity’s sake,” says artistic director Sarah Ward, whose cabaret alter ego is Yana Alana.

“With everything that we are going through – climate change, the virus and India – I just don’t think that sequins are the only things that should be available to audiences.”

And she’s perfectly happy “to turn politicians who are up their own arses into bum puppets”.

No doubt the performance will cause offence among some while delighting others.

“People just love it,” says Ward, who has another bum performance piece in her repertoire – Donald Rump.