Melbourne commuters would receive real-time information about crowding on public transport under a trial of new technology designed to encourage social distancing and boost confidence in Victoria's network.

A group of 50 commuters – largely essential workers currently using the system – will participate in the first phase of a state transport department trial being rolled out across Melbourne's trains and several bus routes this week. 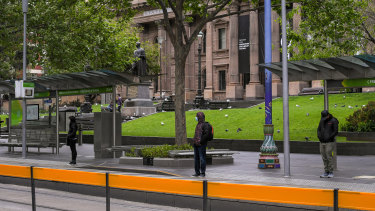 Passengers socially distance while waiting for a tram on Swanston Street on Monday. Credit:Eddie Jim

The participants will have access to real-time information about passenger density on buses, trains and train platforms. This will be derived from a predictive model that uses data from the Myki system, bus passenger counters and Bluetooth sensors across the rail network.

The trial is set to be expanded in coming months and if deemed successful, would be rolled out to all commuters on the PTV app soon after that – but possibly not until early next year.

US President Trump’s tweet downplaying the seriousness of COVID-19 will make the job of public health officials even harder, according to a US infectious Diseases physician who spoke to ABC Radio National a short time ago.

Joshua Barocas MD, an Assistant Professor of Medicine at the Boston University School of Medicine, said Trump’s tweet telling the public not to fear the coronavirus was “incredibly disappointing”.

“I have to be perfectly frank, that last tweet was very disheartening to see,” the doctor who regularly treats COVID-19 patients told Breakfast host Fran Kelly. 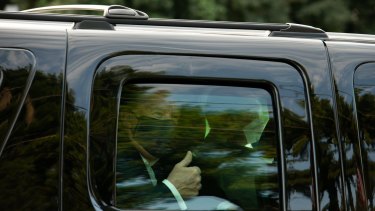 U.S. President Donald Trump as he is driven in a motorcade past supporters outside of Walter Reed National Military Medical Center yesterday. Credit:Bloomberg

“This is a virus that is incredibly scary, incredibly dangerous and incredibly deadly and it’s incredibly disappointing to see that sort of brazen disregard come from the President.”

Dr Barocas, who is not treating the President and admitted he was commenting on his condition from afar, said his biggest concern about Trump returning to the White House imminently was that he was “certainly” still infectious.

“We know that people are infectious for at least 14 days,” he said.

While it was not unheard of to discharge infectious patients and require them to quarantine at home, Dr Barocas said Trump’s behaviour in recent days – including exposing secret service agents to the virus during a hospital drive-by stunt yesterday- indicated he may not take quarantine seriously.

“My concern is this is the president who has sort of refused to follow basic public health measures and safety protocols. It makes me quite concerned for the staff who will be changing his bedsheets and bringing him food,” he said.

Although Mr Trump had evidently responded well to the mixture of drugs administered by his doctors, Dr Barocas said the President was still not out of the woods yet and could still “fall off a respiratory cliff”.

“He's infectious and he still hasn't passed that point where perhaps he could fall off the respiratory cliff, which we've seen happen quite often in the case of hospitalised COVID patients.”

McEnany said in a statement on Twitter that she tested positive on Monday morning, local time, and was not experiencing any symptoms:

She joins a growing list of infected Trump associates that includes first lady Melania Trump, at least two White House aides who travel with the President and three Republican senators.

McEnany was among several officials who attended a ceremony in the Rose Garden at the White House late last month when Trump introduced Judge Amy Coney Barrett as his nominee to the Supreme Court. That was a common event for many of those in the administration or Congress who later tested positive.

US President Donald Trump to leave hospital after three days

US President Donald Trump has announced he will be leaving the hospital where he has been treated for coronavirus on Tuesday morning (AEST), urging Americans not to be afraid of COVID-19 or let it dominate their lives.

Trump's return to the White House would come three days after he was admitted to Walter Reed Medical Centre in Maryland.

Trump said in a tweet he was feeling better than he did 20 years ago, even though doctors have administered three different types of medication in recent days for his COVID symptoms and given him supplemental oxygen:

Good morning and welcome to today's coronavirus live blog. My name is Craig Butt, and I will be keeping track of the latest COVID-19 news from Australia and around the world today.

As always, shoot me an email or leave a comment in the blog if you have any news tips or something to share.

Back when The Age used to run a commuter blog on weekdays, I used to include a brainteaser whenever I was at the helm. Here's one I dug out of the archive to use again today. Can you solve it? First person with the correct answer in the comments section gets the bragging rights. (Melbourne readers who can recall the answer have a bit of an edge on those from around the rest of the country on this one).