Mr Hammond, a pro-Remain MP, said in the strongly-worded letter that it was apparent the document was dated August 2019, and so could not have been leaked by a minister from Theresa May’s government.

The document filed by the Cabinet Office, called Operation Yellowhammer, shows the areas that could be most vulnerable if the UK leaves the EU without a deal on October 31.

The explosive revelations marked ‘official-sensitive’ include the expectation of a return of a hard border in Ireland due to the inability to roll-out the government’s proposed limited checks, and shortages of fuel, medicine and food. 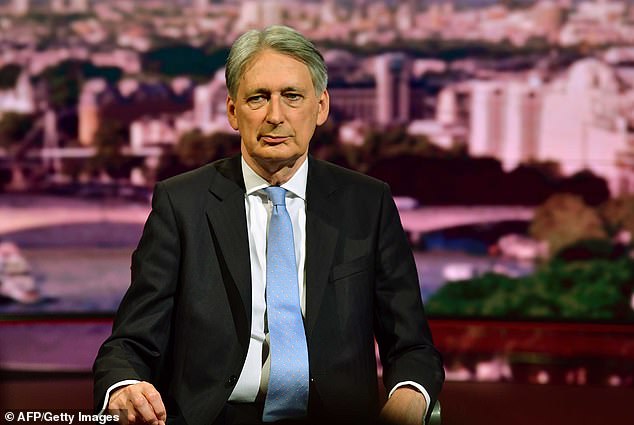 Philip Hammond, a pro-Remainer, has criticised Number 10 for suggestion the Operation Yellowhammer leak came from a former minister in Theresa May’s government

Mr Hammond said a Number 10 source had briefed the dossier was ‘deliberately leaked by a former minister in an attempt to influence discussions with EU leaders’.

Mr Hammond added: ‘It has now become apparent that the leaked document was, in fact, dated August 2019 and would not, therefore, have been available to any former minister who is not serving in the current administration.

‘Accordingly, I am writing on behalf of all former ministers in the last administration to ask you to withdraw these allegations which question our integrity, acknowledge that no former minister could have leaked this document, and apologise for the misleading briefing from No. 10.’

It is the latest in a number of clashes between the government and Mr Hammond since he left government. 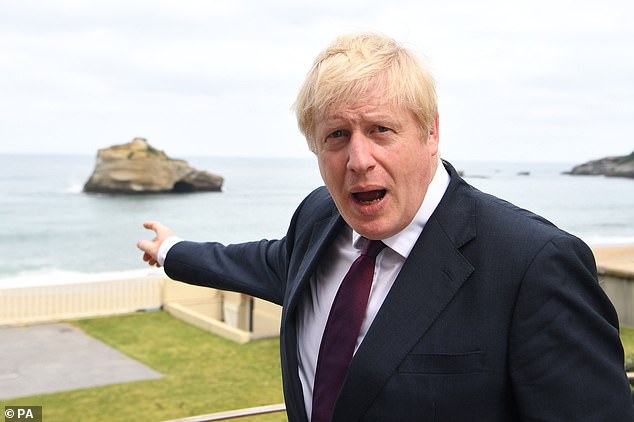 Prime Minister Boris Johnson participates in a TV interview ahead of meetings as part of the G7 summit in Biarritz, France, today

Earlier this months the former chancellor penned an explosive letter to Mr Johnson, signed by 20 of his Tory colleagues, in which he suggests the PM has ‘set the bar so high that there is no realistic’ chance of a new divorce agreement being struck with Brussels.

Meanwhile, in a separate newspaper column for The Times the former chancellor took aim at Mr Johnson’s top aide Dominic Cummings who he accused of ‘pulling the strings’ to steer the government towards a No Deal split from the EU.

Mr Johnson is currently at the G7 summit where the prospect of a Brexit deal is ‘touch and go’ and a failure to reach an accord would be the fault of the European Union, he said.

‘It all depends on our EU friends and partners, I think in the last few days there has been a dawning realisation in Brussels and other European capital what the shape of the problem is for the UK,’ he told the BBC.

‘I think it’s going to be touch and go but the important thing is to get ready to come out without a deal.’

In a series of broadcast interviews Mr Johnson confirmed that he would withhold the bulk of the £39 billion Brexit divorce bill if there is not a deal.

‘I think what the entire European Union understands is that if we come out without a deal that the £39 billion is not pledged,’ he told Sky.

If there was a no-deal Brexit, he said he would ‘guarantee’ that people would still be able to get medicine and ‘I think it’s highly unlikely that there will be food shortages of any kind’.