Home » World News » From the Archives, 1991: Hawke and Keating, the showdown at last

Hawke and Keating: the showdown at last

The Labor caucus will vote on the prime ministership this morning after a dramatic confrontation yesterday between the Prime Minister, Mr Hawke, and his deputy, Mr Keating, and the revelation of a 1988 secret agreement in which Mr Hawke agreed to quit after the 1990 election. 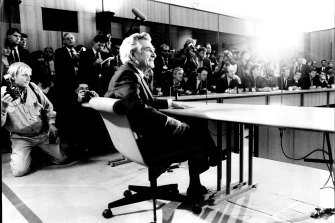 Bob Hawke after defeating Keating in the June 3 ballot.Credit:Peter Morris

Caucus will meet at 8 am.

The Government was in turmoil last night. Cabinet was forced to defer its long-awaited decision on Coronation Hill after a two-hour meeting described by sources as “electric” and bizarre.

The numbers are uncertain. Mr Hawke must be harmed by the disclosure yesterday that in 1988 he had given Mr Keating a promise — in the presence of the transport magnate Sir Peter Abeles and the ACTU secretary, Mr Bill Kelty, — to stand aside after the 1990 election.

The Right-wing numbers man Senator Graham Richardson lit the match for the leadership confrontation on Wednesday when he went to Mr Hawke, declaring he had learned of the private agreement and asking what he was going to do about it.

Mr Hawke confirmed he had made the agreement but said he had changed his mind about going. He told Senator Richardson his disposition was to continue as Prime Minister. But he indicated he would think about it during his trip to Europe, due to start on Wednesday. He also said he would consider the situation overnight. 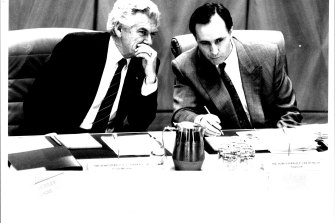 Keating with Prime Minister Bob Hawke in May 1991.Credit:Fairfax Media.

The Prime Minister’s spokesman confirmed Mr Hawke had given an undertaking at the 1988 meeting. But he said Mr Hawke’s view was that Mr Keating’s speech to the press gallery dinner last December was “such an act of treachery that all bets were then off”. Mr Hawke had informed Mr Keating of this when they talked about the leadership in January, the spokesman said.

The spokesman said that in January Mr Keating had argued that even if Mr Hawke had a better chance of winning the 1993 election, he (Mr Keating) should still have “his turn” as Prime Minister.

The Attorney-General, Mr Duffy, last night declared his support for Mr Hawke and said it was a tragedy for the party, the Government and the country that the Hawke-Keating partnership had “got to this”. “This is a situation where tragically you break up a winning team. You’ve had a full forward kicking a lot of goals, and a centre half forward getting the ball down there all the time. That ought not be altered.”

The Right is split op the leadership. Senator Richardson last night was believed to be trying to swing the crucial Queensland Right — recently locked into Mr Hawke — to the Keating camp. At a three-and-a-half hour meeting of the Centre Left last night there was overwhelming support for Mr Keating. Mr Hawke needs the Left, which has consistently supported him, to remain relatively solid.

A Left Cabinet minister, Senator Bolkus, last night tried to talk up the solidity of the faction behind Mr Hawke. But an emergency meeting of the pro-Hawke Left in the office of the Immigration Minister, Mr Hand, was desperately trying to bring back three “wobblies” after five Left members supported Mr Keating.

Mr Hand said he was calling the Left’s most senior Cabinet minister, Mr Howe, in Stockholm, at 1 am.

Senator Bolkus said; “My view is that the leadership should be supported. Bob Hawke has led us to four election victories against the odds in the past. He’s a person who always bounces back. I’m quite confident that he’ll be re-elected if the challenge is on next week and I think he’ll do so with the overwhelming majority of caucus.”

Mr Hawke’s office said last night that possibilities for the new deputy if Mr Hawke won were Mr Howe, or the Transport and Communications Minister, Mr Beazley, with the Primary Industries Minister, Mr Kerin, as an outside chance.

The dramatic showdown follows months of leadership tension and speculation, although the strong Labor result In the NSW election had appeared to give Mr Hawke a little breathing space.

Mr Keating has said repeatedly that he would not challenge Mr Hawke in the party room, although in the past few weeks MPs have increasingly come to believe that a vote was inevitable.

The Hawke and Keating camps late last night strongly disputed how Sir Peter Abeles came to be at the secret 1988 meeting. A spokesman for the Prime Minister said that Sir Peter’s attendance at the meeting was not at the request of Mr Hawke, but was requested by the other participants. A spokesman for Mr Keating flatly denied this.

The Opposition attempted to embarrass the Government by trying to move a no-confidence motion in Hawke. The Government leader of the House, Mr Beazley, gagged the Opposition, amid rowdy scenes just before midnight. Mr Keating sat on the backbench during the vote, while Mr Hawke was on the frontbench. They were both loudly jeered by the Opposition when they came in.

The Opposition Leader, Dr Hewson, said yesterday’s “extraordinary events” meant the no-confidence motion should be debated before the House rose which had been expected about. 2.30 am.

After two caucus meetings on May 31 failed to resolve the crisis a leadership ballot was held on June 3. Bob Hawke won the ballot 66 to 44 to remain prime minister and Paul Keating moved to the backbenches. Keating would challenge again, this time successfully, in December 1991.