No more is it a road. Nor is it a footpath. And that was the confusion that many Melburnians faced as they strove yesterday to overcome decades of parental conditioning — “Don’t walk on the road!” — and dip a timid toe into Swanston Walk. 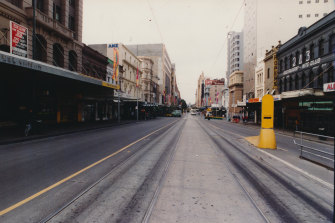 But it was only the pedestrians who were confused. At the mouth of the Walk, near Flinders Street Station, motorists hit their first congestion waiting for pedestrians to finish crossing against the lights.

Traffic moved smoothly along city routes, and the two constables near Flinders Street Station spent most of their time shepherding pedestrians who couldn’t tell green from red.

Earlier in the day, few pedestrians had strayed off the sidewalk. The exceptions were a few students near RMIT (obviously encouraged by the International Socialists) and the occasional TV news crew.

Later, others took advantage of the carless lanes. The scenes from a mall included a cyclist slapping his knees as he rode without checking over his shoulder, a man and a woman smoking cigarettes in the right-hand lane, and people sitting on the road eating from tables and chairs.

Cafes that had previously languished in arcades or been hidden below street level put tables and chairs on the street, giving a new twist to eating in the gutter, and immediately reported three-fold increases in business.

Car-park operators also said they had expected an increase in business, but custom had remained level. 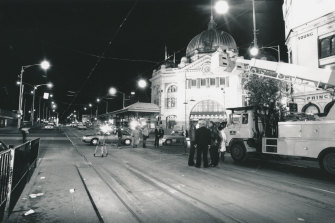 Swanston Street under construction to become a pedestrian thoroughfare.Credit:Sandy Scheltema

Swanston Walk’s first business day was dubbed a traffic success, with many motorists reporting that the run to and from the city was easier than usual.

VicRoads monitored 14 traffic points, of which only two were reported to have traffic heavier than normal at any time. The most congested areas were Punt Road, between Victoria Parade and Swan Street, and Victoria Parade, between Hoddle and Rathdowne streets, where a crane was parked in a clearway during part of the morning peak.

At 5.30 pm, six of the 14 points were flowing more smoothly than usual, and the remainder were normal.

The director of metropolitan operations at VicRoads, Mr David Berry, said there had been no need to make any big changes in the planned system. “The first day went off better than we would have hoped for,” he said.

Mr Berry said Mondays tended to be quieter for traffic, and the number of cars on the road was expected to increase towards the end of the week.

Five cars were towed away under the new laws allowing VicRoads to authorise the removal of a car parked in a clearway in a bypass area. Mr Berry said the offending motorists would be required to pay a $155 towing fee to retrieve the car, plus a $60 parking infringement notice.

The Transport Minister, Mr Spyker, said he was convinced that in the long term, the system would work well. He said he was still concerned about the shorter term while motorists adjusted, but yesterday’s success gave him greater confidence.

He rejected criticisms from the RACV that within three years Melbourne would be suffering traffic flow problems at least as serious as those experienced before the Walk opened.

The chief executive of the RACV, Mr Keith Blyth, said he was not particularly interested in how traffic flowed on the first working day the Swanston Walk was open because it was not representative of future trends.

“What happens in the first couple of days will just happen, but the medium term will be a mess,” Mr Blyth said. “This week there will be adjustments and it will work satisfactorily for a year or two, or maybe three.”

Mr Blyth said VicRoads had made alterations to the traffic systems that would allow for a 10 to 15 per cent increase in traffic. He said that once the economy picked up and jobs returned to the city, traffic problems would grow.

The Opposition predicted there would be a ripple effect on congestion, pushing traffic flow problems to the outer rim of the city. The Opposition’s spokesman on major projects, Mr Birrell, described the Walk as an expensive gimmick and a thoroughly unwelcome experiment.

“It is foolhardy to close a key city thoroughfare without having first created a ring road by linking Melbourne’s freeways.”