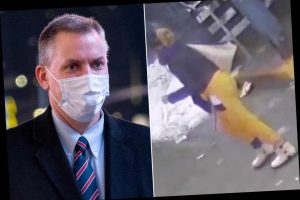 Top cop Dermot Shea said NYPD officials “don’t take too many things more seriously” than the random shoving of a Bronx woman onto elevated subway tracks this week — describing the investigation as a “full court press.”

Rosa Galeas, 54, told The Post she was on her way to work around 7:50 a.m. Tuesday when a stranger unexpectedly came up behind her at the 174th Street and Southern Boulevard station.

She said the woman pushed her once, but she kept her balance.

But the suspect shoved her a second time, sending her onto the elevated tracks, she said.

Galeas luckily made it back up the platform before the next train pulled into the station, with the help of a good Samaritan.

“Let me just say…. we don’t take too many things more seriously than this, in terms of an innocent woman going to work, coming home, and having to go through that,” the commissioner told NY1 Wednesday morning. “It’s a full court press here. You know the public demands, and they deserve an arrest on this case to put them at ease, and that’s exactly what we aim to do.”

“[It’s] such a strange time in transit right now,” Shea said. “We know that the transit system and the MTA is part of New York City’s DNA. It’s the lifeblood, and we’re going to do everything in our power to make sure it remains an extremely safe transit system.”

“This is really what New Yorkers are about, so we’ll get this case to a closure,” he added. “And…we’ll make sure we have the proper balance of officers deployed appropriately….to the right spots to keep New Yorkers safe.”