A grandmother has been eaten alive by a huge python after venturing into the Indonesian jungle to collect rubber.

Residents managed to catch the 22ft-(6.7 metre) long snake and cut it open, finding the remains of the 54-year-old grandmother inside. 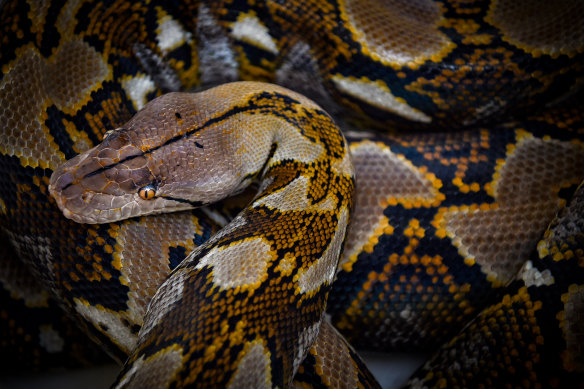 Jahrah, who like many Indonesians goes by just one name, walked into the jungle alone in Jambi province, on the island of Sumatra, but did not return home.

Her family became worried and villagers sent search parties out into the forest.

Two days after her disappearance, they came across the huge snake, with its enlarged stomach, resting in a jungle clearing.

They then cut open its stomach with knives and machetes, revealing the remains of the woman.

There is speculation that the clearing of forest for palm oil cultivation in countries such as Indonesia is leading to greater contact between pythons and humans.

Anto, the chief of the local village, said the woman would have been snatched by the snake’s jaws and then slowly suffocated to death. He added: “The victim did not come home after saying goodbye to her family to go to the garden collecting rubber from trees on Friday.

“Her family then reported her missing to the local authorities, and a search has been carried out since then.

“The snake was killed by locals, who then dissected its stomach. Everybody was shocked. It turned out that the woman we were looking for was in the snake’s stomach.”

He said villagers are scared because they suspect that other snakes, which are equally large, are living in the surrounding forest.

The woman’s body was largely intact when the snake was sliced open because it had not had long to start digesting its meal.

Reticulated pythons are the world’s longest snakes. Found across South and South-east Asia, they can grow up to (7.6 metres) in length.

Once they reach maturity they prey on wild boar, deer, domestic dogs and monkeys.

This ambush predator grabs hold of its prey with dozens of sharp curved teeth, then squeezes it to death before swallowing it whole.

It is one of the few species of snake that occasionally preys on humans.

In 2018, a woman who went to check on her vegetable garden on the island of Sulawesi in central Indonesia was killed and swallowed by a 23ft-long python.

As in the Sumatra case, local villagers caught the snake, cut it open and discovered her body inside. Her sandals, machete and torch were found nearby.

The year before, a 25-year-old man was swallowed whole by a python, also on Sulawesi.