Hundreds of backpackers could be stripped of their visas ‘We will deport them’: Hundreds of British backpackers could be stripped of their visas and thrown out of Australia for reckless super-spreader party on a Sydney beach

Hundreds of British backpackers could be stripped of their visas and deported from Australia after throwing a ‘super-spreader’ Christmas party on a Sydney beach.

Footage shows around 300 suspected backpackers, many believed to be British, donning Santa hats while singing and dancing on Bronte Beach on Christmas Day. 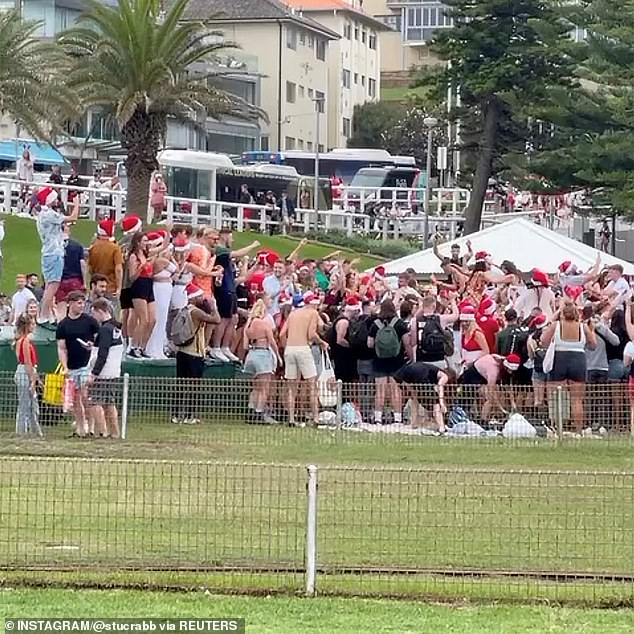 A large crowd gathered for the Bronte party (pictured) on Christmas Day. The next day, some 40 revellers gathered at a North Bondi house party on Boxing Day

‘You could hear lots of clearly English accents, and several people were wearing the white English football jerseys,’ Peter Hannam, from Sydney, told the BBC while he passed the crowds of a walk with his family.

Mr Hawke said he ‘was shocked at the scenes on Bronte Beach’ on Christmas Day and said the government would not hesitate to deport those involved.

It comes as Sydney is battling a new outbreak of the virus with restrictions in the city including a lockdown of The Northern Beaches as the outbreak totals 129 cases. 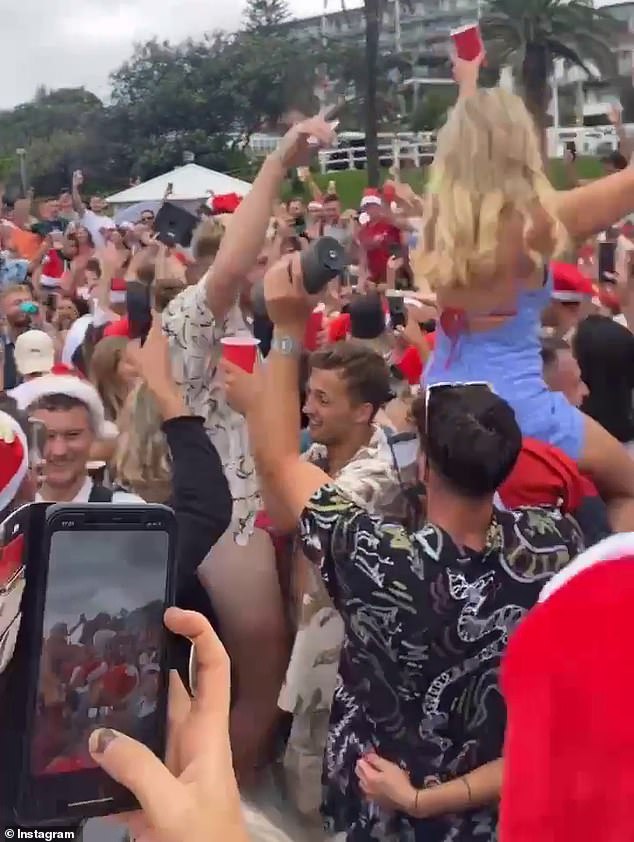 ‘Absolutely, under the migration act, if someone is threatening public safety or health, their visa can be cancelled and revoked,’ Mr Hawke said on 2GB.

‘We don’t want to have public health and safety jeopardised by a small group of people who are not respecting the country that they’ve come to.

‘They know the situation in their home countries is worse in many respects.

‘There are many options available to the department: You can put them into immigration detention … however … we’re very happy to deport people, if people are flagrantly disobeying public health orders.’

Mr Hawke said there are still chartered flights to deport people even as most outward international flights are banned during the Covid-19 pandemic. 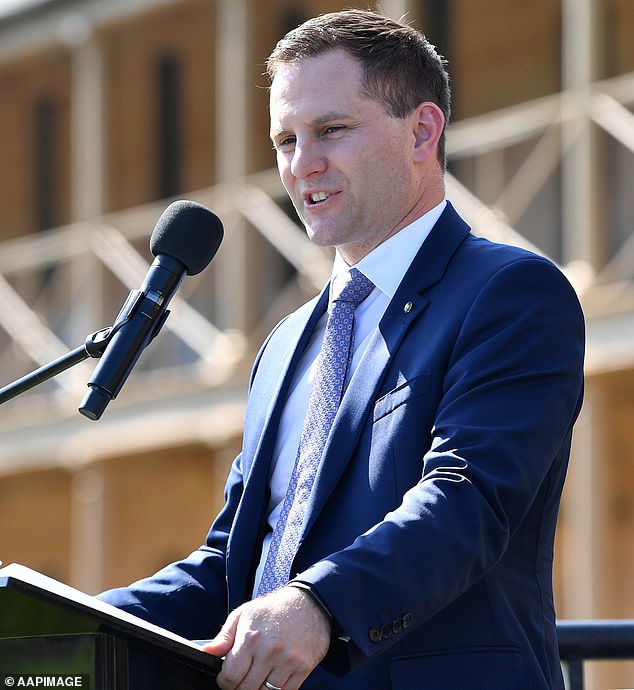 Mr Hawke said those fined could also be deported if they are identified as a backpacker or someone on a temporary visa.

‘There has been a couple of incidents (Bronte and North Bondi),’ he said.

‘Sydneysiders would agree 10 months into a pandemic, we all know the drill now, we all understand how difficult this has been around the world, we understand why we have to be doing what we’re doing.

‘People who are guests in our country also have to be doing the right thing.’

‘It’s not okay to treat this New Years Day as normal. We know the public health orders are saying there are restrictions in place,’ he said.

‘Temporary visa holders must obey those restrictions and public health orders the same as anyone else.

‘I’ve instructed the Department of Home Affairs to work closely with NSW authorities in the lead-up to New Year’s Day as well to make sure everyone is doing the right thing and if anyone caught doing the wrong thing, that their visa status is brought before the government.’

Mr Hawke’s warning comes after Liberal MP Jason Falinski, who is based at Narrabeen on Sydney’s coronavirus-hit Northern Beaches, called for any backpacker who was at the Bronte party to be sent home. 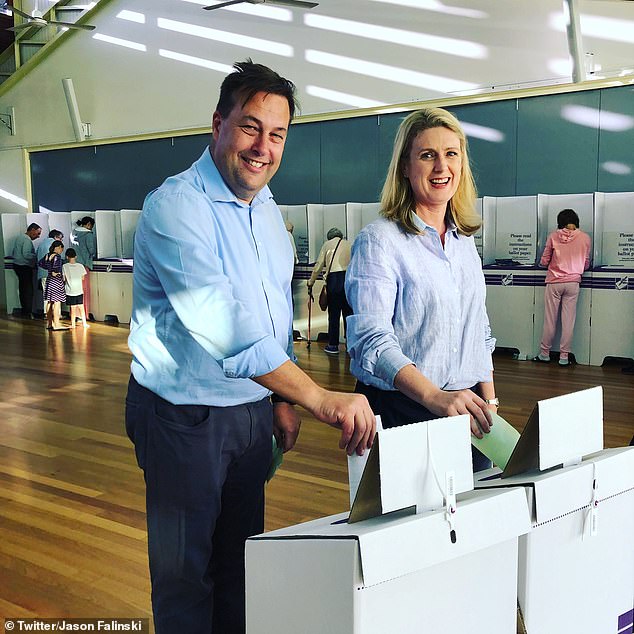 ‘Their visas should be cancelled and they should be deported immediately,’ he told the Northern Beaches Advocate on Saturday.

‘I will be calling on my government to request the identity of these people from state authorities, using facial recognition technology to compare with their passports if necessary.’

The northern zone of the Northern Beaches will remain locked down until January 9 to stop the disease spreading – but residents will be allowed five visitors from the zone on New Year’s Eve.

The southern zone will be released from lockdown on January 2 and will be allowed 10 visitors from within the zone on December 31.

What are the restrictions for New Year’s Eve in Sydney?

• The CBD frontline worker fireworks vantage point offering is cancelled. Frontline workers will be offered another opportunity in 2021.

• Hospitality venues will remain open but must adhere to the one person per four square metres rule.

• Council events may continue but they must be controlled and seated with no mingling, and record keeping requirements must be strictly adhered to.

• A short, seven minute fireworks display will continue at midnight.

Unless you have a New Year’s Eve Pass through Service NSW, you will not be able to enter designated zones around Circular Quay, North Sydney and the City.

For the Northern Beaches peninsula zone (North of Narrabeen Bridge, and east of the Baha’i Temple), the following rules apply until January 9:

· The health situation remains volatile and the current restrictions will remain in place to supress community transmission.

· However, indoor and outdoor gatherings will be allowed for New Year’s Eve and New Year’s Day but will be restricted to five visitors in total from within your zone (and includes at homes).

· Current arrangements allowing five people to gather outdoors (not at homes) for exercise and recreation, from within the same zone, continues.

· No restaurants, cafes, pubs or clubs (except for takeaway) will be permitted to open, including for New Year’s Eve.

For the remainder (southern zone) of the Northern Beaches, the following rules apply until January 2:

· The health situation remains volatile and the current restrictions will remain in place to supress community transmission.

· However, indoor and outdoor gatherings will be allowed for New Year’s Eve and New Year’s Day but will be restricted to 10 visitors in total from within your zone (and includes at homes).

· Current arrangements allowing 10 people to gather outdoors (not at homes) for exercise and recreation, from within the same zone, continues.

· No restaurants, cafes, pubs or clubs (except for takeaway) will be permitted to open, including for New Year’s Eve.

• Gatherings in the home remain at 10 visitors in total (including children).

• Outside gatherings (such as picnics) will be restricted to 50 people in total (down from 100).

For regional NSW there is no change to current arrangements.

Backpackers, could, hundreds, of
World News