Hundreds of Indonesian public servants have been struck down by the coronavirus, with bureaucrats in the Health Ministry the worst affected.

Data published on the Jakarta provincial government website showed that 252 health public servants working in the capital have contracted the virus.

The Transportation Ministry was the second worst-affected, reporting 175 infections, the ministries of Communications, Finance and Defence all reported more than 50 infections each and the Jakarta-based national Anti-Corruption Commission had reported 106 infections.

Minister for Maritime Affairs and Fisheries Edhy Prabowo tested positive earlier this month and three director-generals in his ministry – the equivalent of a deputy secretary in the Australian Public Service – have since fallen ill, with one dying on Monday. Religious Affairs Minister Fachrul Razi also tested positive this month. 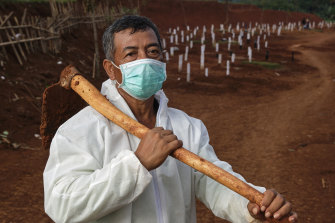 The statistics for infection clusters, including in government ministries across the capital, were last updated on September 18.

Jakarta is home to about 10 million people and has seen a sharp rise in daily infections rates in recent weeks, with more than 1000 cases recorded per day on a regular basis. It has recorded more than 70,000 cases since the pandemic began — nearly double the second worst affected province of East Java, which has reported 43,000 cases. 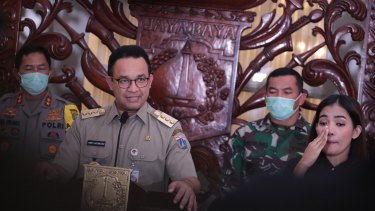 Anies Baswedan, Governor of Jakarta: “This is the time in which policymakers need to trust science”.Credit:Dadang Kusuma Wira Saputra

However, testing is far more readily available in Jakarta than in most of the other 33 provinces and it is likely this has contributed to the capital's proportionally high case numbers.

Governor Anies Baswedan has re-imposed a partial lockdown in response to the rise in numbers but while parks and schools are closed, for example, shopping malls and markets are still open albeit with a 50 per cent limit in capacity. Business in 11 crucial sectors including healthcare, food, communications and energy also remain open at 50 per cent capacity.

The Health Ministry's director-general for disease control and prevention, Achmad Yurianto, said his department employed more than 50,000 people and the infection rate was understandable as many were front-line workers.

The 252 positive cases have occurred since April. Currently, there are 10 active cases.

"They work in the field, assisting healthcare units such as at seaports, airports, some of them are reinforcement at hospitals, others were assisting laboratory workers and health clinics in other provinces. They worked in high risk areas so it is only normal that they were contracted the disease," he said.

Achmad said the ministry was "the agency implementing the tightest health protocols. Anyone who fails to wear a mask is banned from entering the ministry's compound". He said most contracted the disease in the field."

More broadly, Indonesia has recorded 278,722 cases since March 2, currently has 61,379 active cases and there are 131,361 suspected cases. The death toll of 10,473 is the highest in south-east Asia, nearly double the 5381 deaths in the Philippines. Since the start of September, the daily death toll has regularly been above 100.

Daily infection rates passed 4000 people per day for the first time on September 19 and more than 4000 daily cases were recorded seven times in the last 10 days.

While the number of people being tested is slowly rising, the World Health Organisation reported last week that only four provinces — Jakarta, West Sumatra, West Papua and Yogyakarta — had reached the minimum case detection benchmark of one suspected case tested per 1000 people.