The great return to the office begins… unless you’re a civil servant: Hundreds of thousands of staff are expected to be back at their desks TODAY after bosses call time on WFH (but Whitehall remains almost deserted)

Heavy traffic was seen heading into London today on what has been touted as a landmark day for workers returning to the office – as congestion rose to just below pre-pandemic levels.

After 18 months of employees working at home, some of the UK’s biggest employers have told hundreds of thousands of staff they are now expected to turn up for work – even if it is just for one day a week.

But there was dismay as civil service chiefs and the Bank of England again delayed plans to require their staff to return to the workplace.

The A102 in Kent going towards the capital was packed with queueing cars, vans and lorries, as TomTom data showed traffic in London was up by 10%. The live congestion level was 59%, compared to 63% pre-pandemic.

Commuters heading into London today faced delays on some train lines during the morning rush hour, with those using Southeastern services particularly affected. 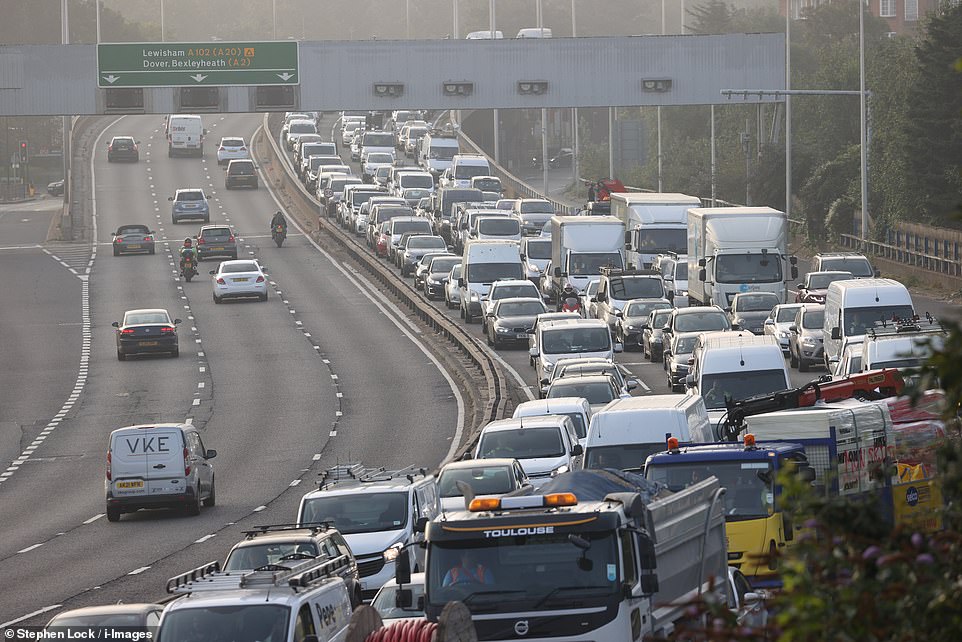 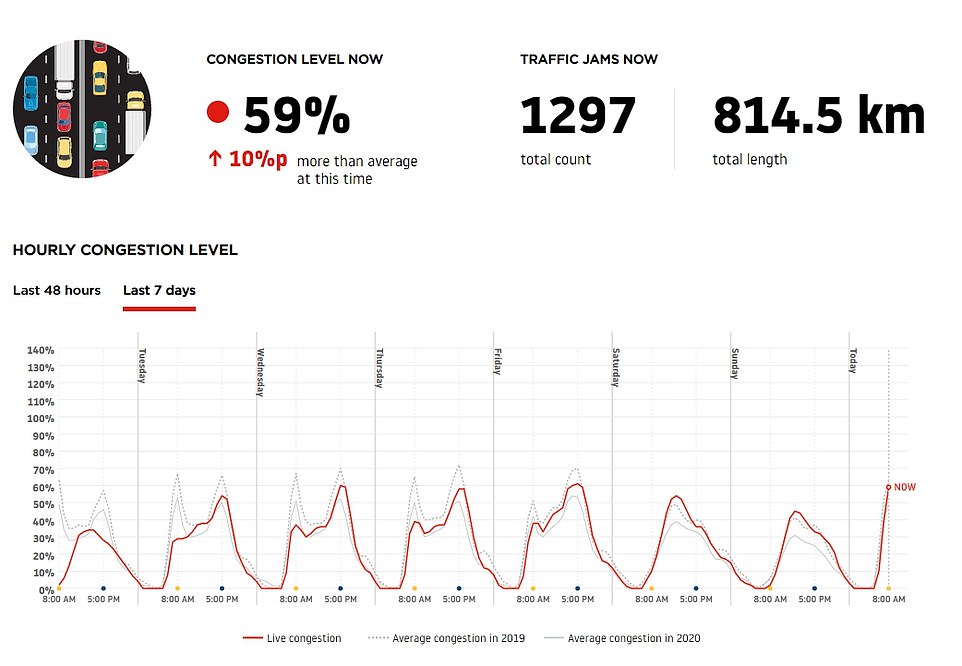 TomTom data showed traffic in London was up by 10% compared to normal – suggesting some of the back to work rush was materialising. The live congestion level was 59%, compared to 63% pre-pandemic 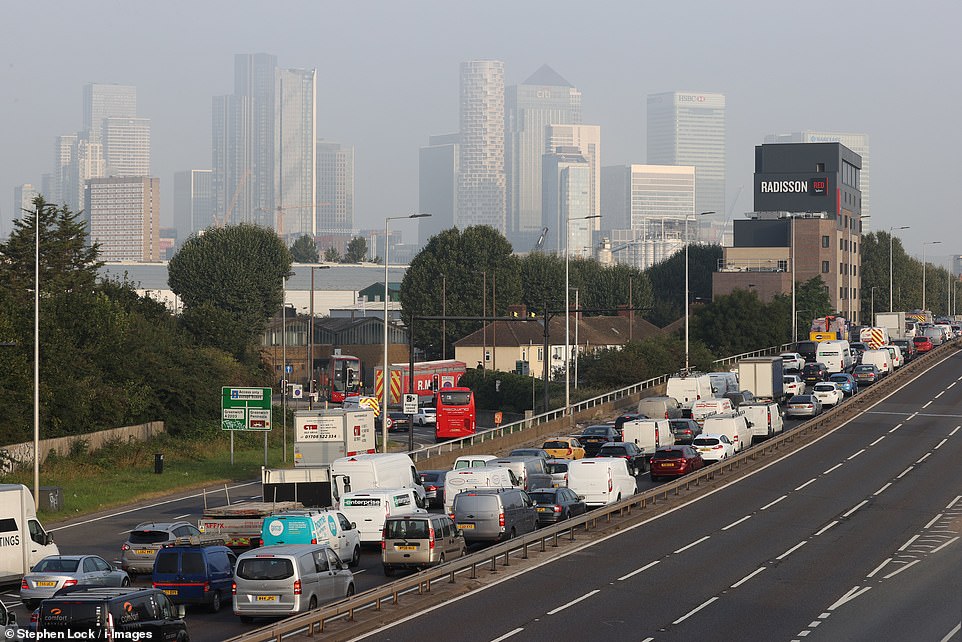 A failure of the electricity supply at London Victoria meant trains to and from the station may be cancelled, delayed by up to 30 minutes or revised – which was mainly affecting routes from South East London and Kent.

In Scotland, there were delays between Edinburgh and Dunbar on ScotRail and LNER services after someone was hit by a train on the line between Prestonpans and Longniddry.

And in South Wales, a fault on a train between Cardiff Central and Barry meant trains running between the stations were being cancelled or delayed.

Passengers using South Western Railway services later on were also expected to face trouble, with a shortage of train crew resulting in a reduced service between London Waterloo and Exeter and Yeovil from midday.

Other operators such as Thameslink and Southern said they were operating a reduced timetable to cope with staff shortages.

In London there were severe delays on the District line Turnham Green and Richmond due to a signal failure at Kew Gardens, while the Circle and Metropolitan lines also faced minor delays due to train cancellations.

There were also cancellations on the London Overground between Stratford and Richmond.

A Daily Mail audit of 18 of the UK’s biggest firms, which together employ more than half a million staff, found that half of their office workers are expected to return this week.

Nine of the companies have targeted today, while a further three have demanded a return by the end of September.

Tens of thousands of employees working for Sainsbury’s, British Petroleum and a slew of banks and investment houses will return to the office for at least one day from today, while Vodafone and Deloitte will fully open their offices for the first time.

The drive to bring Britain back to the office came amid growing frustration among ministers that the Civil Service has failed to take the lead.

Official ‘work from home’ Whitehall guidance was removed on July 19 and businesses have been told that the Government ‘expects and recommends a gradual return over the summer’.

But insiders said Whitehall had only seen a slight increase in staff back at their desks, with the numbers in the office still ‘pretty low’.

One source suggested ministers were waiting to see what impact the return of children to the classroom this month has on coronavirus case numbers before starting a push.

‘The Government doesn’t want another rollercoaster like last year,’ they said. 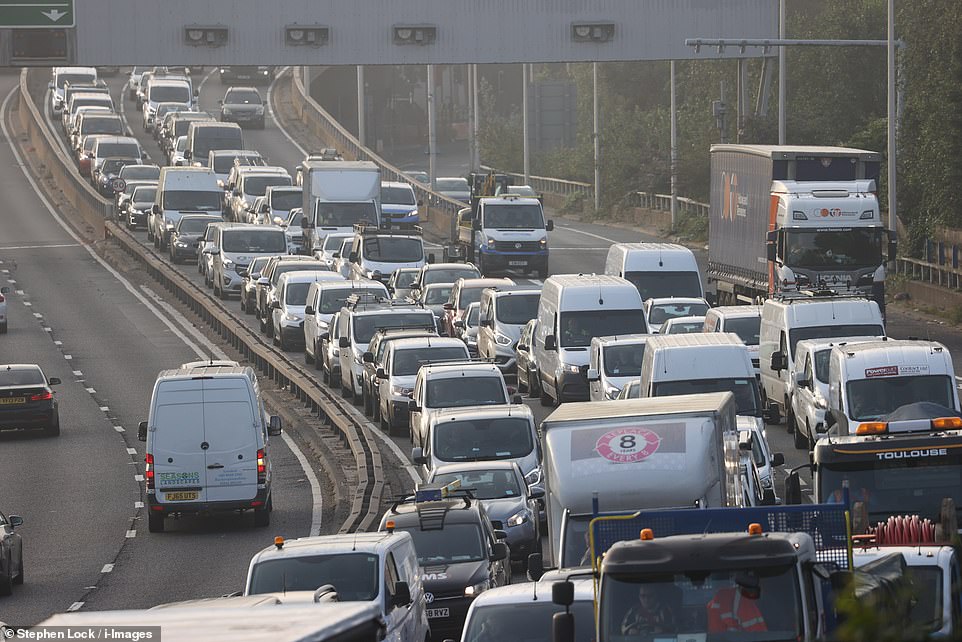 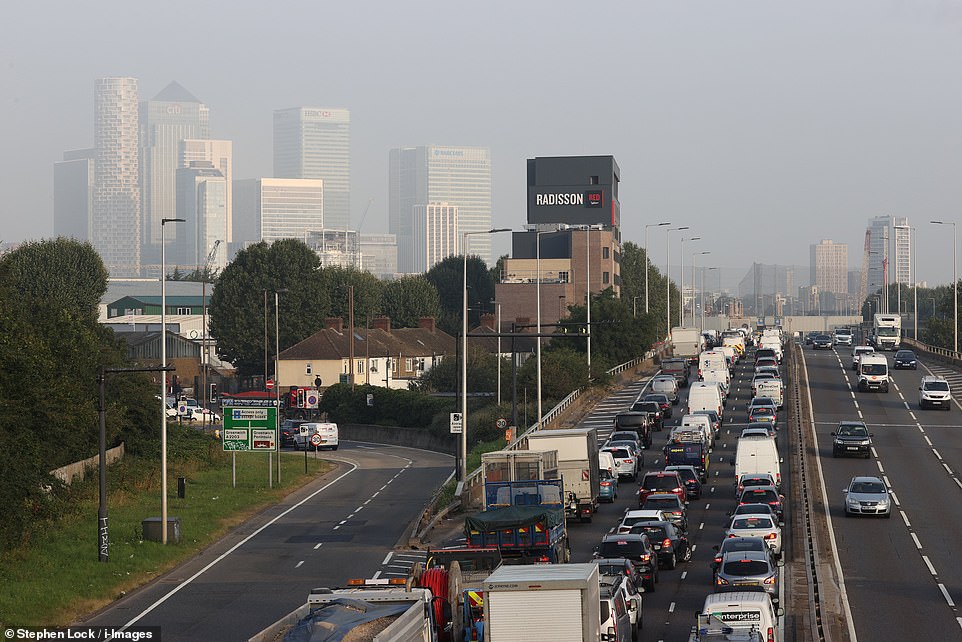 50 shops went to the wall every day for six months

Nearly 50 shops shut every day in the first half of the year as lockdowns and the shift online ravaged high streets.

The country lost 8,739 stores between January and June, according to research compiled by PwC and the Local Data Company.

Exit from lockdown gave shops a reprieve but the number of customers heading out to high streets and shopping centres is a fifth below pre-pandemic levels. Cities and high streets have been the hardest hit. Suburban areas benefited from families spending close to home while retail parks were insulated from the worst of the crisis.

Lisa Hooker, of PwC, said: ‘The next six months will be a make or break for many chains.’

Private sector businesses believe the end of the school holidays and the fact everyone has been offered two vaccinations gives them a mandate to demand a return to the office.

Former Conservative leader Sir Iain Duncan Smith warned thousands of low-paid staff in the hospitality sector would be left unemployed within weeks if office staff do not return to their desks.

He urged civil servants to ‘set an example’, adding: ‘If we are going to spend our whole lives scared stiff of Covid then this economy will go down the plughole.’ The Centre for Cities think-tank also raised the alarm saying September was a ‘crunch month’ for city centres.

‘By taking appropriate steps to reduce the risk of transmission of Covid, we are gradually increasing the numbers of staff in the workplace, while ensuring we retain the flexibility of home-based working where appropriate.’

Despite today’s push for workers to return, many companies will not see all of their staff return until well into the autumn.

NatWest, which has 34,000 office staff, said a ‘very small’ number were currently coming into the office, but that it was pushing for a ‘gradual return’ from September 13.

Every firm surveyed by the Mail said hybrid working – a mix of office and home working – was the future.