Home » World News » Is my area going into Tier 3? The Covid hotspots at risk of tougher restrictions this week

Is my area going into Tier 3? The Covid hotspots at risk of tougher restrictions this week THE COVID tiering system is set for a shake-up this week, and a number of places are predicted to be moved into tougher Covid restrictions.

Ministers will review the tiers on Wednesday, with any changes coming into force by the weekend, putting a dampner on Christmas cheer. 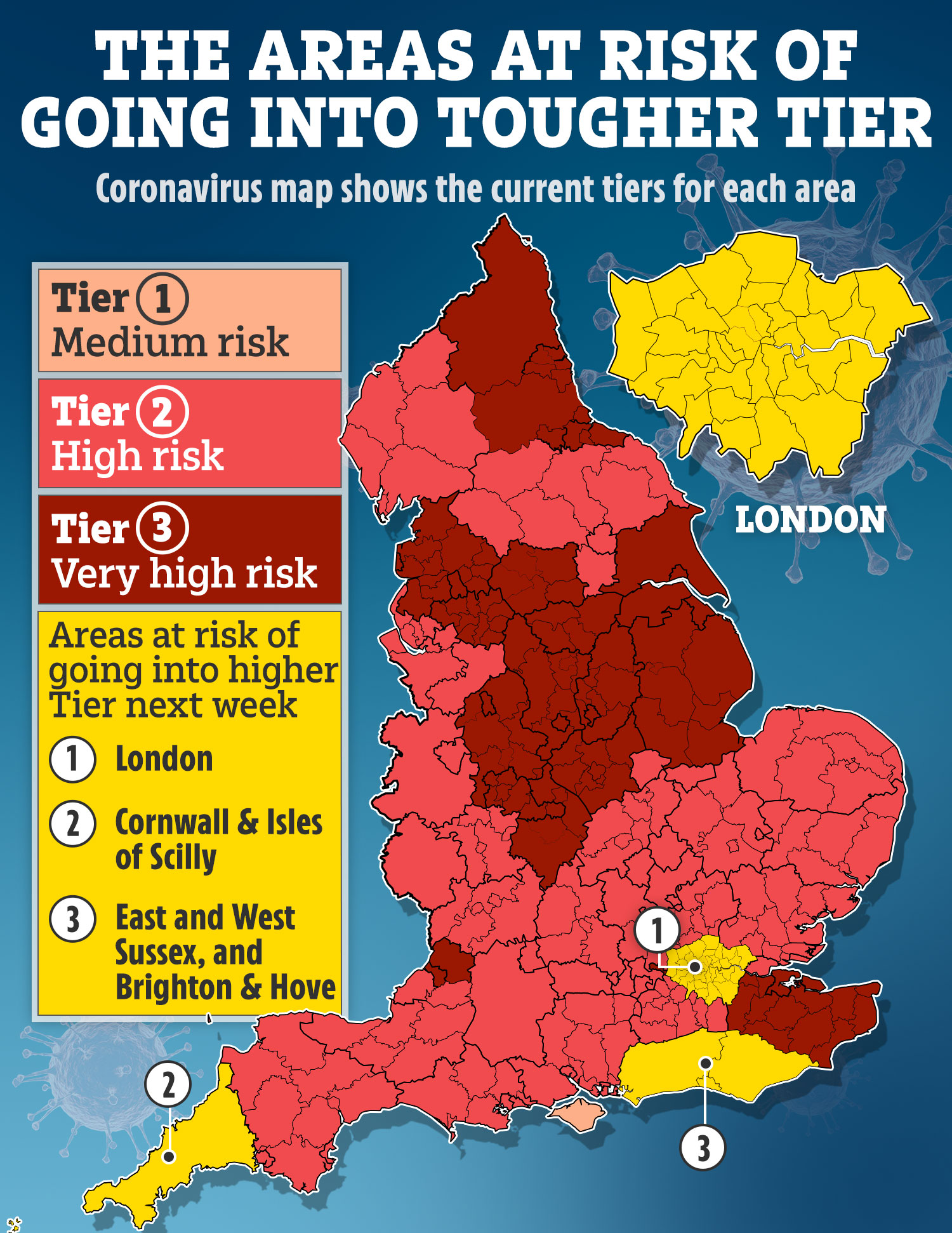 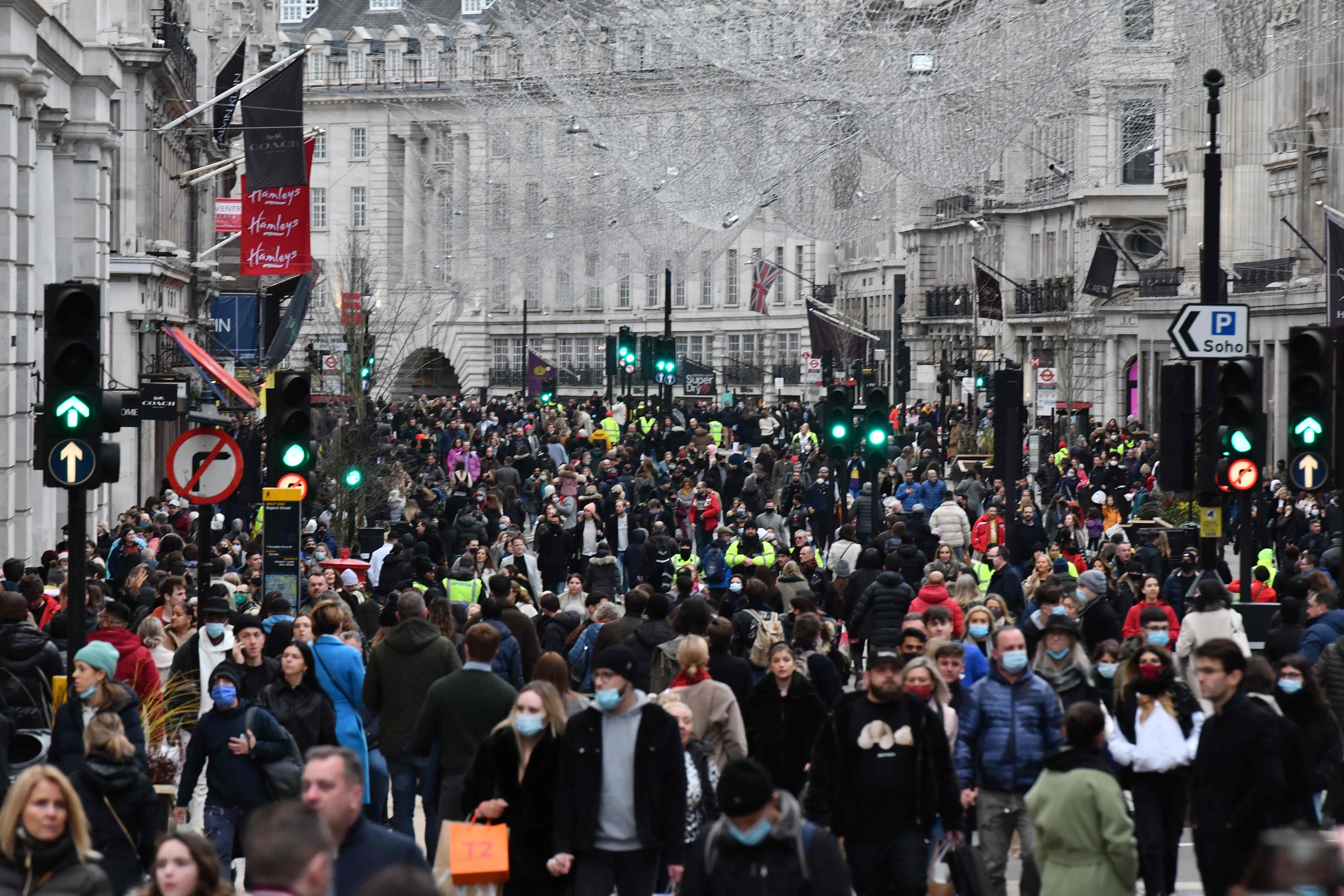 The ZOE Covid Symptom Study App, run by researchers at King's College London has given a glimpse into what to expect.

Its data shows where cases have been increasing in the population as a whole, and in the over 60s, to work out the places at risk of moving tier level.

In the past seven days, cases have increased in both caterogies in three areas – London; East and West Sussex, and Brighton and Hove; and Cornwall and Isle of Scilly.

Where cases are increasing is one of the five criteria the Government. They also look at pressure on the NHS.

London is on the brink of Tier 3, and a decision on the capital's fate could be announced as early as today.

Moving into the "very high alert" level would force the hospitality sector to shut down, other than for takeaway service. It would also mean people can't meet friends and family outside or inside.

The whole capital has been in Tier 2 since December 2, which has still allowed people to meet for drinks – as long as they eat a meal, too. 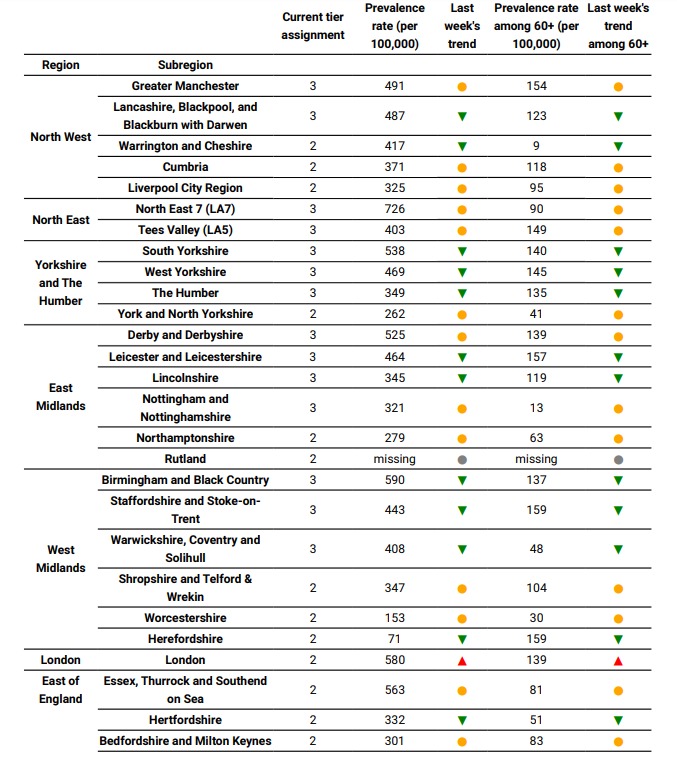 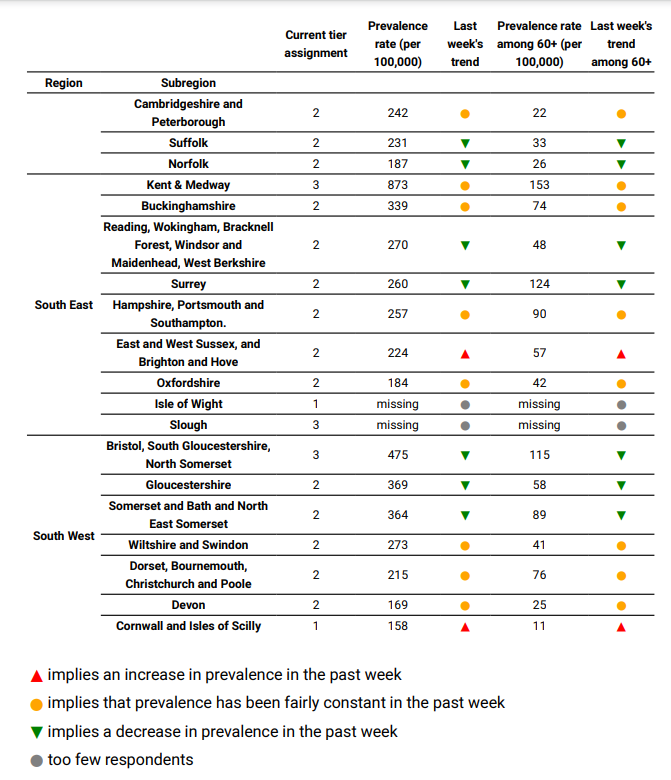 Sussex and Brighton and Hove is also in Tier 2, but with cases creeping up, the seaside spots are now at-risk of moving up a level.

The coronavirus prevalence there is only a fraction of current Tier 3 areas, however, with 224 overall and 57 in over 60s.

Cornwall and Isles of Scilly is the only part of England in Tier 1, along with the Isle of Wight.

However, Cornwall's cases are on an upward trend, the app data shows, reaching a prevalence of 158 overall and 11 in over 60s.

It suggests it could move up to Tier 2 by the weekend, meaning no area would be in Tier 1, which only has the "rule of six" and 11pm curfew.

Scientists have previously said it is unlikely any area will be in Tier 1 by the end of the year, because it has such minimal impact on keeping Covid cases low.

London could be moved into Tier 3 today

London has consistently shown signs of a worsening outbreak in a number of datasets, and it now has the highest infection rate of all nine regions in England.

London Mayor Sadiq Khan said it is possible an announcement could be made today on moving the capital into Tier 3.

The Health Secretary is set to give MPs an update on the latest surge in Covid infections at around 3.30pm today.

It comes after Boris Johnson led a "Covid O" Committee this morning to consider closing restaurants and pubs in the capital under the restrictions.

Mr Khan told Sky News: “My understanding is that Covid-O is meeting as we speak – that’s the sub-committee of the Cabinet that makes the recommendations.

The allocation of tiers was due to be reviewed on December 16 but Mr Khan said the situation in the capital means a decision might be taken sooner.

He said “it’s possible” that a decision will be made today “because we have seen over the last few days a big increase in the virus”.

Mr Khan said he has been trying to convince the Government that Tier 3 is a “blunt instrument”.

“It’s worth them asking themself the question whether a move to Tier 3 is a blunt instrument that doesn’t really address in a laser-like fashion where we are seeing the biggest problems.”

Mr Khan wants all secondary schools and colleges in London to close a few days early and reopen later in the new year due to “significant outbreaks” among 10 to 19-year-olds.

The mayor is also calling for all schools in London to be given priority testing with immediate effect and for extra resources to support online learning.

But Labour leader Sir Keir Starmer said he would urge Mr Khan to speak to the Government about what can be done to keep schools and colleges open.

Furious Tory MPs are begging Boris Johnson not to go nuclear and plunge the capital into more draconian measures.

They have written to the PM to warn of the devastating hammer blow this would deal to London’s already weakened economy.

London's Covid outbreak is centred in the North West. But MPs have been told its unlikely to capital will be split up when it comes to tier levels.

It's the fifth worst in England, and higher than dozens of places currently in Tier 3 restrictions.

What other areas are known to be at risk? 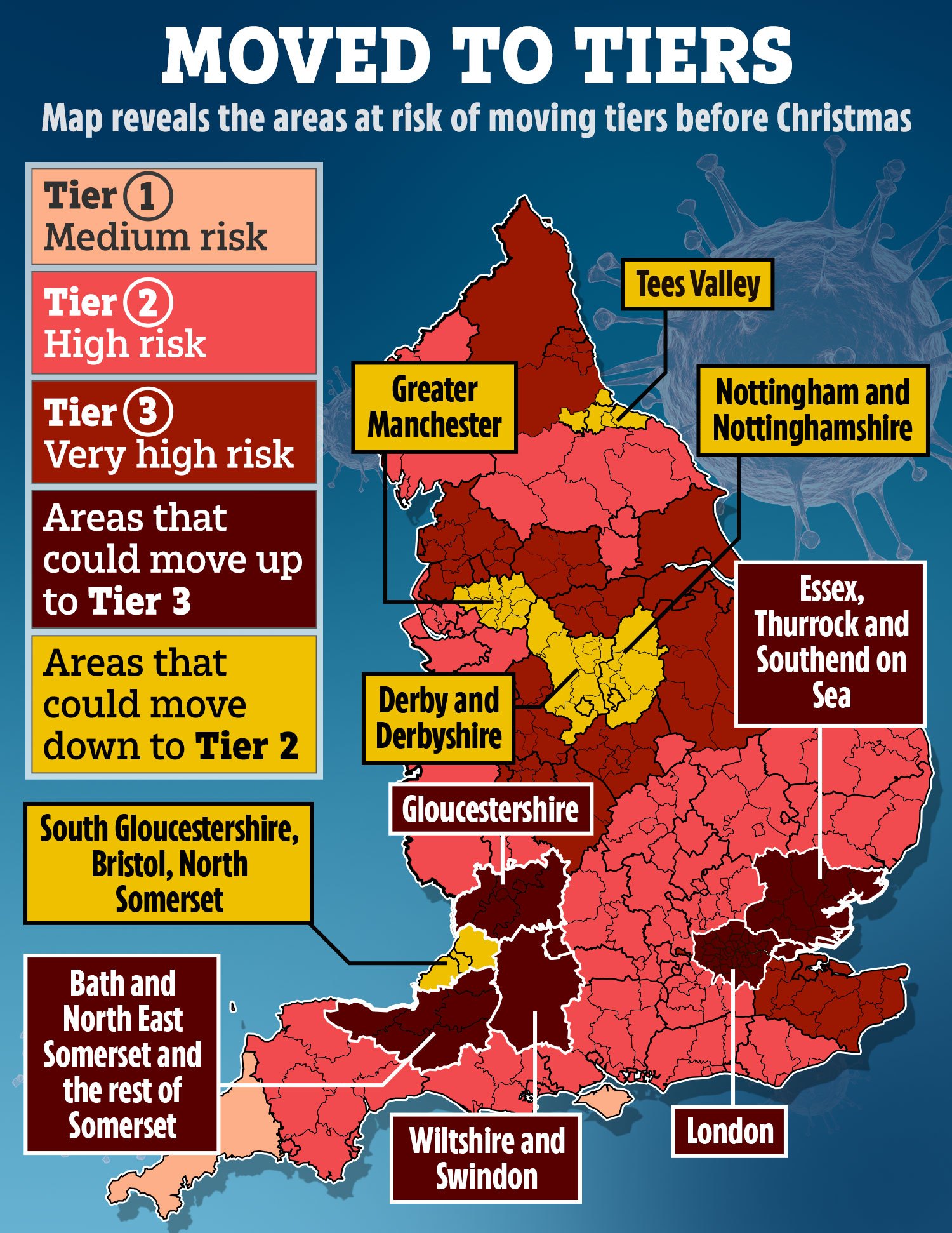 Essex is also expected to be plunged into Tier 3, with some of it's authorities neighbouring the worst-hit boroughs of London.

According to KCL, it's outbreak has not worsened in the past seven days, based on app users reporting symptoms or positive test results.

But the virus prevalence in the area of Essex, Thurrock and Southend-on-Sea remain high; there are some 563 cases per 100,000 in that area generally, and 81 in the over 60s.

And each individual local authority in Essex is among the Covid hotspots of the country, based on new cases per day per 100,000.

But Basildon has the third highest infection rate in the whole of England – it has risen sharply from 372.9 to 613.8 in seven days.

On Friday, KCL listed Essex as one of the five most at-risk areas of Tier 3, based on prevalence as well as NHS bed capacity.

On the other hand, the Covid Symptom study app also revealed the five areas that may be moved down from Tier 3 into Tier 2 after an impressive turnaround.

Seperate data from Public Health England reveals of the 315 local areas in England, only 105 have seen a fall in Covid-19 cases.

A week-on-week increase in coronavirus rates was recorded in 208 out of 315 local authority areas in the seven days to 9 December, with two areas seeing cases remain flat.

Every borough of London saw cases increase, Sky News reported, as well as 39 out of the 45 local areas in Eastern England and 58 of the 67 local areas in South East England.

It comes as new figures from the Office for National Statistics show that one in 11 people have had Covid.

The stats suggest that at least 8.7 per cent of the population now has antibodies to the disease.