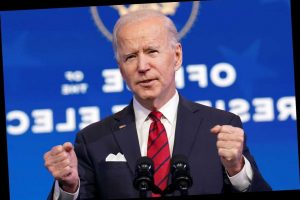 Cuomo skipping Biden inauguration over threats to NY, other US capitols

Azar says Biden vaccine goal would be ‘squandering’ of opportunity

Following his inauguration at the heavily fortified US Capitol, Biden will sign executive orders to end Trump’s travel ban, rejoin the Paris Climate Accord and mandate mask-wearing on federal property, Ron Klain told senior staff in a memo obtained by the Associated Press.

The new president, 78, will also extend an eviction moratorium and pause on student loan repayments amid the raging coronavirus pandemic and corresponding economic crisis.

But perhaps the most consequential action on Biden’s agenda is an immigration bill providing a path to citizenship for the nation’s estimated 11 million illegal immigrants.

According to the AP report, illegal immigrants would be put on an eight-year path, while people in the Deferred Action for Childhood Arrivals program or from war-ravaged countries would be put on a faster track.

Later in the week, Biden is also expected to sign orders aimed at reopening schools and businesses, expanding COVID-19 testing, and reuniting illegal immigrant children separated from their parents at the US-Mexico border, Klain said.

Biden and his team also reportedly plan to rescind a cross-border permit for the Keystone XL oil pipeline on his first day in office, undoing a project resurrected by Trump.

“These executive actions will deliver relief to the millions of Americans that are struggling in the face of these crises,” Klain said in the memo.

“President-elect Biden will take action — not just to reverse the gravest damages of the Trump administration — but also to start moving our country forward.”

The memo comes after the incoming commander-in-chief unveiled a massive, $1.9 trillion coronavirus bailout package increasing unemployment benefits and small business loans and offering a new round of $1,400 stimulus checks.

The Biden administration will need to win support from skeptical Republican lawmakers weary of the ballooning national debt if it wants the bill to become law.