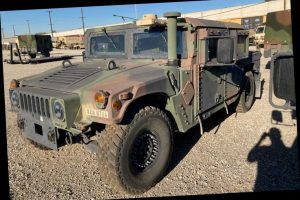 Razor wire surrounds US Capitol ahead of Joe Biden inauguration

At ease! National Guard says thanks for donations, but troops just napping

Biden to stay at Blair House the night before inauguration

An armored Humvee has been stolen from a National Guard facility in California, according to a report.

The $120,000 military vehicle was swiped Friday morning from the 40th Brigade Support Battalion National Guard Armory in Bell, a suburb of Los Angles, according to the FBI, which put up a $10,000 reward.

The Humvee is “up-armored” — making it more resistant to attack — and is considered a “combat vehicle,” Laura Eimiller of the FBI’s L.A. bureau told the Los Angeles Times.

The alert immediately sparked speculation online that the theft could be tied to threats of ongoing violence before President-elect Joe Biden’s inauguration Wednesday.

Eimiller told the L.A. Times that the theft was not directly linked to the threats “at this time” — but added, “We’re not ruling any of this out.”

Theft from a military facility carries a statutory maximum sentence of 10 years in federal prison, the FBI warned.