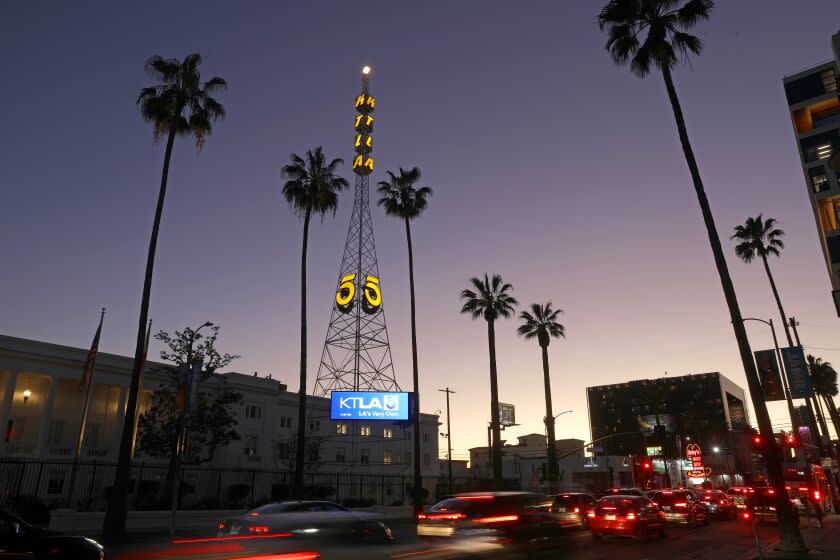 KTLA-TV Channel 5 is defending its handling of the departure of two popular anchors amid calls by viewers to boycott the station and criticism that station executives have been insensitive to concerns about a shortage of Latinos on air.

For nearly two weeks, KTLA has endured a backlash from angry viewers over the exit of Lynette Romero — the station's most prominent Latina — and her co-anchor on weekend morning shows, Mark Mester. He was fired last Thursday after an emotional on-air appeal, accusing his bosses of cruel treatment toward viewers and Romero, which the station's management denies.

The young co-anchor hired a small plane to buzz around the station's Sunset Boulevard home in Hollywood with a banner reading: “We love you Lynette!"

After working at KTLA for nearly 24 years, Romero is joining rival KNBC-TV Channel 4 in October as co-anchor of that station's early morning newscast.

Romero's departure leaves KTLA without a full-time Latina anchor to serve a market in which Latinos make up nearly 50% of the population. A recent survey by a Latino journalists group showed KTLA has the lowest percentage of Latino on-air talent among TV stations in Los Angeles. Last spring, leaders of CCNMA: Latino Journalists of California requested a meeting with KTLA executives to address the issue.

CCNMA Executive Director Mekahlo Medina, who conducted the study, told The Times that KTLA News Director Pete Saiers was initially open to a meeting. But when Medina pressed for a meeting date, Medina said he was told that KTLA managers were no longer interested.

"It was disappointing and confusing when KTLA chose not to have a conversation with us about diversity," said Medina, a weekend anchor at KNBC. "We couldn't make any headway with them."

A KTLA spokesman declined to comment on the station's refusal to meet with the group but defended their efforts to diversify the newsroom.

The flap follows three years after KTLA was acquired by TV station chain Nexstar Media Group, part of its $4 billion acquisition of Tribune Media. Nexstar hired new senior executives, replacing the station's longtime leadership. The company, based near Dallas, installed Janene Drafs in February 2020. She became the station's first female general manager, arriving from a Seattle station where she had worked since 1992.

The newsroom manager, Saiers, joined in April 2021, also from Seattle.A Northern California native, he spent spent much of his career at San Francisco's CBS station.

The turmoil at KTLA — which airs L.A.'s top-rated local morning news show — comes as TV stations confront dwindling ratings and rising competition for viewers. Newsrooms across Los Angeles also have been reckoning with longstanding disparities among their ranks.

News organizations, including The Times, have been criticized for a shortage of Latino staff members as well as portrayals of Latinos in news coverage and opinion pieces. In early 2021, the National Assn. of Hispanic Journalists visited with leaders of The Times and other news organizations to push them to improve their representation.

The NAHJ delegation met with KTLA. "We have asked the newsroom to share its staff diversity data with the public and listen to journalists of color when they ask for equal representation in the newsroom," NAHJ said in a March 17, 2021, tweet.

CCNMA: Latino Journalists of California also sought a meeting this year with KTLA leaders. According to Medina, the group was concerned because KTLA did not have a Latino news anchor on its two late newscasts and just 15% of its on-air staff identify as Latino.

Of the more than 14 hours of news KTLA produces weekdays, only one hour is anchored by a Latino: Pedro Rivera, who joined the station last year. Vera Jimenez, who was born in Mexico and moved to L.A. at age 3, is the station's meteorologist for its weeknight newscasts.

"Stations need to take a hard look at who's delivering the news to us, and recognize that representation matters," said Laurie Ochoa, CCNMA president. (Ochoa separately serves as The Times' general manager of Food, overseeing the paper's Food coverage.)

KTLA said half of the on-air talents it has hired since Drafs became general manager are Latino. Of the eight recent hires, four are Latino, one is Black, one is of Asian descent and two are white.

"We are very comfortable with our diversity efforts but it is always something that we are working to improve," KTLA and Nexstar spokesman Gary Weitman said.

Industry executives have widely criticized KTLA for its handling of Romero's departure.

"KTLA has long had L.A. in its DNA, but the larger corporate group has no history with this city," said Paula Madison, former general manager of KNBC-TV Channel 4 and former NBCUniversal chief diversity officer. "The folks who run that station didn't seem to understand that what they were doing was insulting a person whom many of the viewers have come to regard highly."

The station has been besieged since Sept. 14, when it announced Romero was leaving.

"My husband and I watched Lynette for years and years," said Upland resident Nita Ulloa-Pedroni, who describes herself as a "former KTLA viewer." She recalled the chemistry between Romero and Mester.

"It was like you had friends inside your living room," Ulloa-Pedroni said. "They were fun and friendly and it was really good banter."

The station had been in conversations for months to keep Romero, including offering a salary increase to match the KNBC offer. But Romero, who had worked the weekend shift for eight years, wanted opportunities to work weekdays, said people close to the station who were not authorized to comment.

Her last day anchoring the KTLA weekend morning news was scheduled for Sunday, Sept. 18, which coincided with the end of her employment contract.

Early that week, KTLA spokesman Weitman said, Romero "asked to extend her vacation through the end of her contract."

"She was scheduled to work on that weekend. Her decision meant that she wouldn’t be at KTLA to say goodbye to viewers or to the weekend team," Weitman said.

Romero declined an interview request. But a person familiar with the situation who was not authorized to speak publicly said that Romero sent a Sept. 11 email to Drafs to discuss details of her departure. Romero was still in limbo the following day, the knowledgeable person said, and asked for vacation days because the situation at the station had become "awkward."

Romero had wanted to say goodbye to viewers — until Sept. 14. That morning, Drafs called to say the station was about to announce the news. Minutes later, KTLA entertainment anchor Sam Rubin read from a teleprompter, saying he wanted to share "some news that we've just been handed here."

"After nearly 24 years, Lynette Romero, our friend Lynette, has decided to move on from anchoring weekend morning news," Rubin said. "KTLA management had hoped that she would stay here her entire career, and KTLA worked hard to make that happen but Lynette has decided to move on to another opportunity elsewhere."

After nearly 24 years at KTLA, our Lynette Romero has decided to move on and pursue another opportunity. We wish Lynette nothing but the best of luck on her next chapter. pic.twitter.com/dnjrhCItSs

"When it was clear Lynette wouldn’t be returning to the air, KTLA management felt it was important that viewers hear the news of her departure from the station, rather than via social media," Weitman said.

Inside the station, Romero's colleagues were upset they were not told before the public announcement, insiders said.

"The way Sam Rubin read that off-handed comment on air, without letting Lynette say goodbye to the viewers, was just wrong," said Ulloa-Pedroni, the viewer. "She had been there 24 years and deserved respect."

Madison and other industry executives said KTLA was following standard industry practice to downplay the move of a key anchor to a rival. .

"But this practice is short-sighted," said a veteran news executive who previously worked in L.A. "The reason you don't let an anchor say goodbye is because you don't want them to rip you on the air. But if someone wants to do that, they can do it in five seconds on their Instagram page."

After a social media blowback, KTLA news executives offered to send a camera crew to Romero's house to record a video goodbye. But by then, the station was in the midst of a PR nightmare, and she declined, several people said.

"In her absence, we intended to honor Lynette’s dedication and work with a story and video retrospective on [the following] Saturday morning’s weekend news," Weitman said. "Unfortunately, instead of reading the scripted story, and without the knowledge of the newsroom or KTLA management, Lynette’s co-anchor, Mark Mester, went off script and ad-libbed a series of remarks about her departure."

He was fired last week. Neither Mester nor his agent could be reached for comment.

News veterans criticized Mester's actions, including referring to Drafs as "that woman" in his Sept. 17 monologue.

"I've never seen anything like it, and I was in television news for 25 years," Madison said. "As I watched the video, I thought 'Oh, my God, they have a renegade anchor on the air, saying whatever the hell he wants to say.' "

She added: "No matter how right he thinks he is, he still hijacked that station's airwaves."

Hi everyone! I’m going to talk about my friend @LynetteRomero on @KTLAWeekendAM Saturday (9/17) at 8:00 am. Please join us! pic.twitter.com/qQgb4Lm9b9

Tensions between management and Romero had been building for a few weeks, insiders said.

Madison questioned why the station didn't renew Romero's contract months ago — or work out a smooth transition.

"If I had an anchor who I absolutely wanted, I renegotiated the terms of their contract a year out so it didn't go down to the wire," Madison said. "I was shocked that they couldn't find an accommodation for her."