How Russians worked to get LABOUR elected: Moscow hackers ‘almost certainly’ spread leaked documents on US-UK trade talks that were used by Jeremy Corbyn during campaign

The papers were brandished by the then-Labour leader during the campaign for the December poll as evidence that the NHS was at risk from a Transatlantic deal.

But the government furiously denied the claims as ‘nonsense’ and launched an investigation with the National Cyber Security Centre after complaining that the material had been circulated by Russians.

The results were announced today as Parliament’s Intelligence and Security Committee was finally appointed, seven months after it last met.

The PM’s spokesman dismissed ‘nonsense’ claims the news was being announced now to deflect from the impending publication of a long-delayed report on Russian interference, which some claim will be damaging to Boris Johnson.

Labour said it condemned ‘any attempt by Russia, or any foreign power, to interfere in our country’s democratic processes’. ‘Labour stands ready to work cross-party to protect our nation’s security,’ a spokeswoman said. 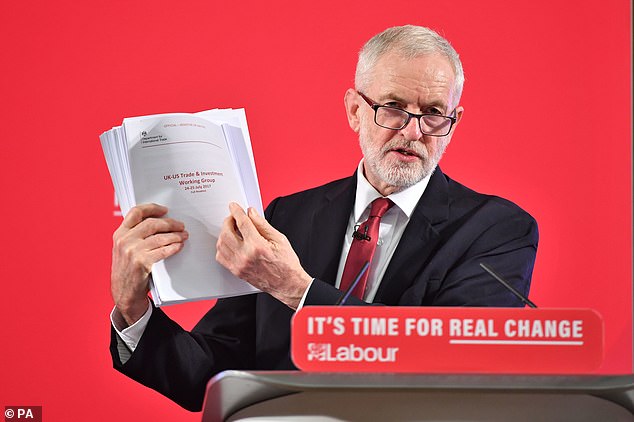 The papers were brandished by the then-Labour leader Jeremy Corbyn during the campaign last year as evidence that the NHS was at risk from a Transatlantic deal.

In a statement to MPs today, Foreign Secretary Dominic Raab said during the campaign – which resulted in a huge Tory majority – a ‘cross-Government election security cell was stood up to coordinate responses to threats and hazards relating to the election’.

‘On the basis of extensive analysis, the Government has concluded that it is almost certain that Russian actors sought to interfere in the 2019 General Election through the online amplification of illicitly acquired and leaked Government documents,’ he said.

‘Whilst there is no evidence of a broad spectrum Russian campaign against the General Election, any attempt to interfere in our democratic processes is completely unacceptable. It is, and will always be, an absolute priority to protect our democracy and elections.

‘There is an ongoing criminal investigation and it would be inappropriate for us to say anything further at this point.

‘The Government reserves the right to respond with appropriate measures in the future.’

A Labour spokewoman said: ‘We condemn any attempt by Russia, or any foreign power, to interfere in our country’s democratic processes.

‘That includes in our response to the publication of the long-awaited report by the Intelligence Security Committee on the Russian threat to the UK.’

The leaked document played a huge part in Labour’s election campaign as they argued they proved the government could not be trusted to protest the NHS in a post-Brexit trade deal with the US.

Mr Corbyn refused to reveal the source of the material – although there is no suggestion it was provided to Labour directly by Russian actors. 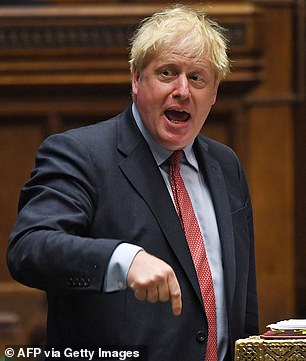 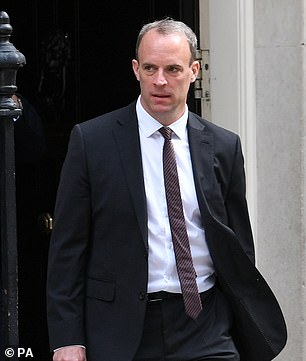 Online forum Reddit later suspended a slew of accounts saying unredacted versions were uploaded as ‘part of a campaign that has been reported as originating from Russia’.

Speaking at the time, Mr Johnson said ‘we do need to get to the bottom’ of the leak.

But he insisted he had not seen evidence of ‘any successful interference by Russia in any democratic event in this country’.

Mr Raab said the UK would ‘continue to call out and respond to malign activity, including any attempts to interfere in our democratic processes, alongside our international partners’.

‘We fully support the recent action taken by our German partners who exposed Russian responsibility for the hack of their Parliament in 2015 as well as their intention to act against those responsible under the cyber sanctions regime,’ he added.