Tom Watson QUITS as deputy leader of the Labour Party and announces he will NOT stand at the general election on December 12 as he insists his decision to walk away is ‘personal, not political’ despite raging war with Jeremy Corbyn 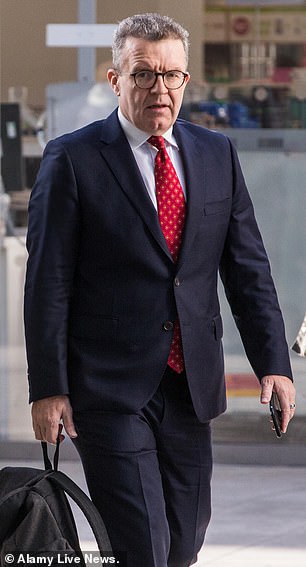 Tom Watson tonight sent a shockwave through Westminster as he announced his intention to quit as the deputy leader of the Labour Party as he also said he will not contest the next general election.

Mr Watson said in a letter to Jeremy Corbyn his decision to walk away was ‘personal, not political’ and that ‘now is the right time for me to stand down from the House of Commons and start a different kind of life’.

The decision brings to an end a furious and long running battle between Mr Watson and Mr Corbyn over Labour’s future.

Mr Watson will formally step down as deputy leader on December 12 – the day of the general election.

In a tweet, with his resignation letter posted below, he said: ‘After 35 years in full time politics, I’ve decided to step down and will be campaigning to overcome the Tory-fuelled public health crisis.

‘I’m as committed to Labour as ever. I will spend this election fighting for brilliant Labour candidates and a better future for our country.’

Mr Corbyn responded to Mr Watson’s resignation letter with one of his own as he said he wanted to ‘sincerely thank you on behalf of everyone in our movement for your contribution to this Party over the last 30 years’.

However, despite the apparent warmth in Mr Corbyn’s letter, Mr Watson will leave the top of the party on terrible terms with the Labour leader.

Allies of Mr Corbyn tried and failed on the eve of the Labour Party conference to oust Mr Watson amid simmering tensions over differences of opinion on Brexit amongst other issues.

Mr Watson argued that a second referendum on Brexit should have taken place before a general election and that Labour should have campaigned to Remain at that ballot.

But his calls ultimately fell on deaf ears as Mr Corbyn stuck to his stance of wanting an election first and staying neutral on the subject of the UK’s departure from the EU.

His decision to quit as an MP also came amid rising speculation that he faced an uphill battle to hold the West Bromwich East seat he has represented in the Commons since 2001. 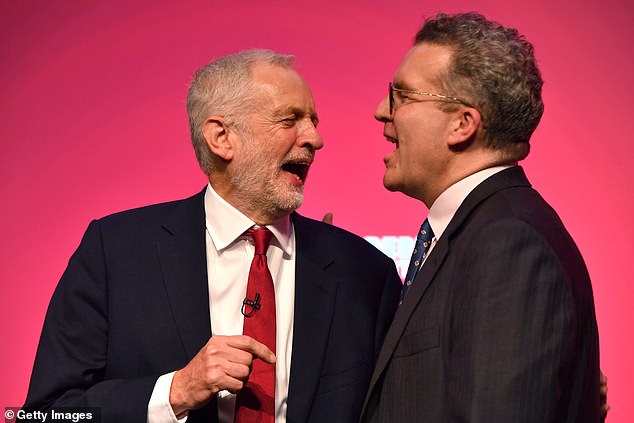 Jeremy Corbyn, pictured with Mr Watson at Labour conference in Liverpool in September 2018, said he wanted to ‘sincerely thank’ his deputy for his ‘contribution to this Party over the last 30 years’ 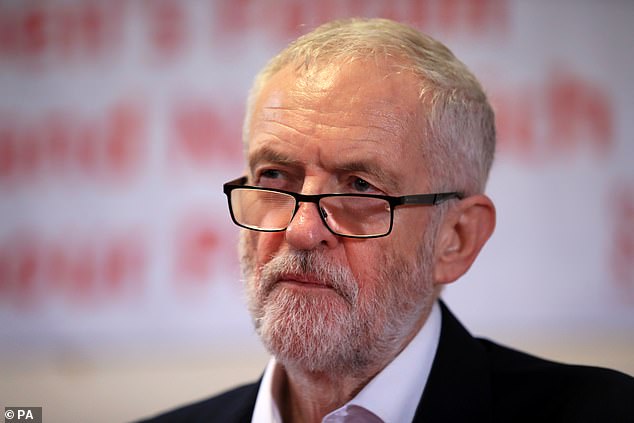 But Mr Corbyn, pictured in Crewe today, and Mr Watson have rarely seen eye to eye during their time at the top of the Labour Party 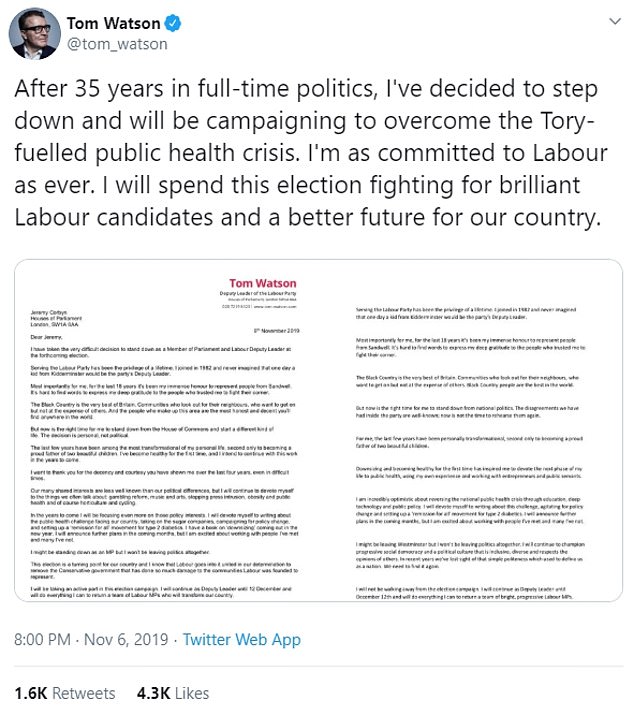 Mr Watson set out his reasons for quitting in a letter to Mr Corbyn in which he said the decision to walk away was ‘very difficult’ and that ‘serving the Labour Party has been the privilege of a lifetime’.

‘But now is the right time for me to stand down from the House of Commons and start a different kind of life,’ he said.

‘The decision is personal, not political. The last few years have been among the most transformational of my personal life, second only to becoming a proud father of two beautiful children.

‘I’ve become healthy for the first time, and I intend to continue with this work in the years to come.’

Mr Watson said he wanted to thank Mr Corbyn for ‘the decency and courtesy you have shown me over the last four years, even in difficult times.’

The Labour veteran said he would continue to campaign on tackling public health challenges after his much-publicised weight loss and would publish a book on ‘downsizing’ next year.

He said: ‘I might be standing down as an MP but I won’t be leaving politics altogether.

‘This election is a turning point for our country and I know that Labour goes into it united in our determination to remove the Conservative government that has done so much damage to the communities Labour was founded to represent.

‘I will be taking an active part in this election campaign. I will continue as deputy leader until 12 December and will do everything I can to return a team of Labour MPs who will transform our country.’

Mr Corbyn responded to the letter with his own in which he said ‘few people have given as much to the Labour movement as you have’.

‘I am proud and glad to have worked with you over these four years and I know this is not the end of our work together,’ the Labour leader said as he added he ‘always enjoyed our very convivial chats about many things, including cycling, exercise and horticulture’. 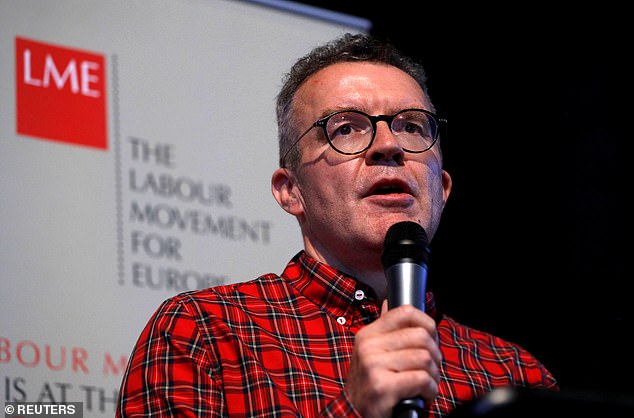