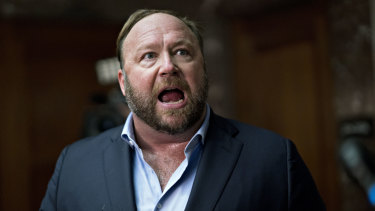 Alex Jones, radio host and creator of the website InfoWars.Credit:Bloomberg

Jones denied the allegations during his web show on Friday and accused one of the lawyers of framing him.

Lawyers say the pornography was among documents they had requested from Jones as part of the discovery process of the lawsuit.

The families of eight victims of the 2012 shooting in Newtown, Connecticut, and an FBI agent who responded to the massacre are suing Jones, Infowars and others for promoting a theory that the shooting was a hoax.

Jones, of Austin, Texas, has since said he believes the shooting occurred.

A court hearing on the documents is scheduled Tuesday.