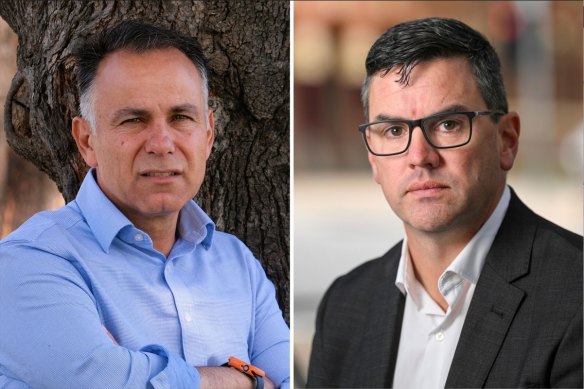 John Pesutto and Brad Battin are competing for the Liberal leadership. Credit:The Age

Canvassing by The Age suggested both candidates had secured about 15 votes, leaving the remaining undecided MPs to sway the outcome.

“I’m feeling very positive today. We’ll see how we go. We’ll all know in a few minutes time,” he said.

“But it’s really now for the party room to make a very important decision and I want to emphasise whatever the decision, we’re all going to get behind it.

“We’re going to work hard together in a unified way to make sure the Victorian people see an opposition that holds the government to account, and that is ready to govern.“

Pesutto, who reclaimed the seat of Hawthorn after losing it in 2018, did not have a security pass to enter parliament. Crozier met Pesutto at a cafe across the road from Parliament House to escort him into the building.

People close to the Pesutto and Battin camps told The Age they were still chasing the votes of Caulfield MP David Southwick, Evelyn MP Bridget Vallence and Liberal upper house candidate Nick McGowan, who held a secret ballot of rank-and-file members to guide his vote in an attempt to energise party supporters. Both the Battin and Pesutto camps told The Age they expected Farrelly to support Battin’s leadership bid.

Battin told The Age on Wednesday afternoon he was confident he could “engage the support of my colleagues”.

“If elected, I will rebuild trust by engaging across the state. As a leader I will build a team that is focused, and is listening to new ways to build our future and to create opportunities for everyone.”