I’ll drink to that! The ‘holy grail’ of whisky fetches £1m at auction… for just ONE bottle

A bottle of whisky dubbed the ‘holy grail of single malts’ has sold for £1million.

The Macallan 1926 Fine And Rare 60-year-old is the first bottle to hit the landmark figure in an online-only sale.

The bottle was one of only 14 of its kind from the Moray distillery’s legendary cask number 263, the world’s most celebrated whisky cask.

The Spanish oak sherry hogshead was filled in 1926, and the drink was allowed to mature for 60 years before it was bottled in 1986.

Only 40 bottles were ever produced including a dozen with labels designed by the renowned pop artist Sir Peter Blake, best known as the co-creator of the Beatles’ Sgt. Pepper’s Lonely Hearts Club Band album cover. 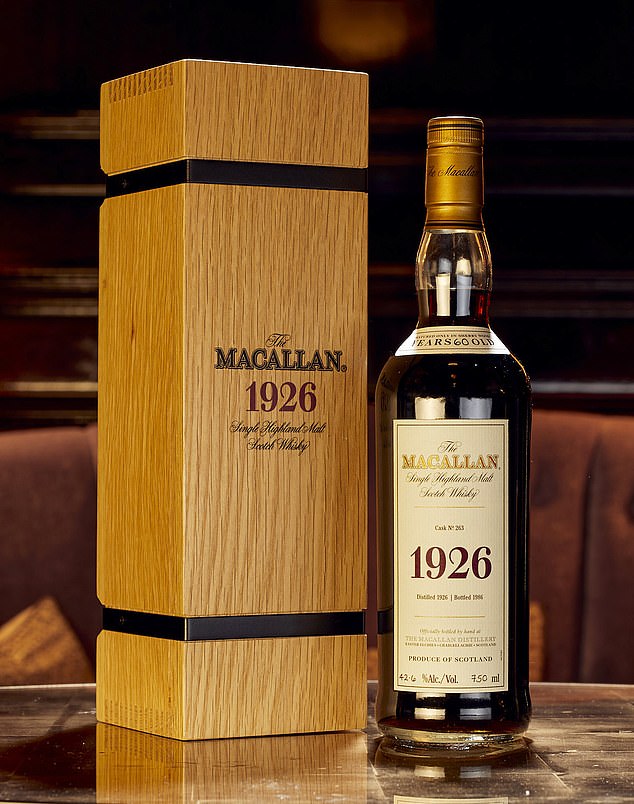 The world record for a bottle of whisky at auction stands at £1.2million (nearly £1.5million with premiums) for a bottle from the same batch, sold at Sotheby’s in October 2019.

It was the leading lot in ‘The Perfect Collection Part 2’, sold by Perth-based Whisky Auctioneer.

Mr Gooding, who died in 2014, was the former owner of soft drink distributor the Pepsi Cola Bottling Company.

During his life, he amassed 3,890 bottles at his home in Denver, Colorado.

The first 1,932 bottles were sold by Whisky Auctioneer in February last year for a total of £3.2million.

Part two of the sale was initially launched in April last year but postponed after the auction site was targeted in a cyber attack.

Speaking ahead of the rearranged sale, Whisky Auctioneer founder Iain McClune said: ‘Undoubtedly the entire collection is crowned by the incomparable Macallan 1926 Fine and Rare, a whisky that has in recent years become the pinnacle of whisky collecting, and for good reason.’

He added: ‘This auction was solely dedicated to one collector’s magnificent library of whisky – a man who was dedicated to building the perfect collection.

‘As enthusiasts of whisky ourselves, we knew that this collection deserved its own spotlight to allow us to truly convey the rarity and sheer scale of something so historic.’

He said Mr Gooding’s entire collection had sold for more than $9million (£6.3million), adding: ‘It has been a privilege for us to share Mr Gooding’s legacy with the world.’