Man inundated with calls after Jamie Carragher tweets his number

Man is inundated with 50,000 WhatsApp messages and dozens of calls after Jamie Carragher inadvertently shared his mobile number on Twitter in a bid to mock Gary Neville

A man has been inundated with more than 50,000 WhatsApp messages and thousands of phone calls after Jamie Carragher posted his mobile number on Twitter for a prank.

Scott Forsyth, of Wylam, Northumberland, said at one point he was being rung three times every 10 seconds by football fans who are still calling him 50 times every hour.

The ex-Liverpool footballer tweeted what he thought was a random number on Sunday while making fun of Sky Sports colleague Gary Neville.

Carragher, who was in Turkey, had appealed for fans to send him a clip of Neville missing a chance for a Manchester United legends side against Bayern Munich in a friendly.

He subsequently posted the number to his 1.35million followers. He has since deleted the tweet. 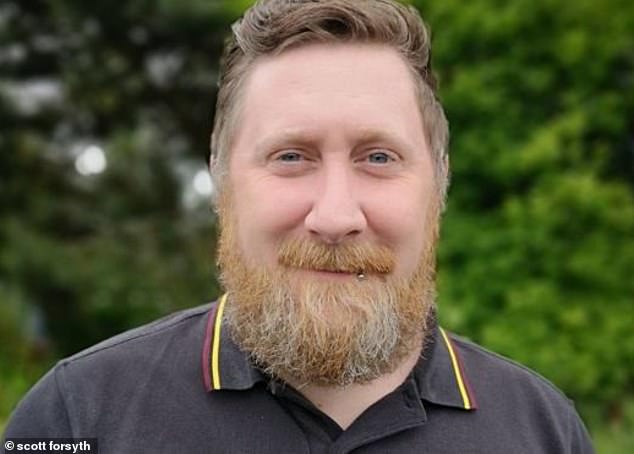 Scott Forsyth, pictured, was inundated with tens of thousands of calls and WhatsApp messages after Jamie Carragher posted his number on Twitter as part of a prank on Gary Neville 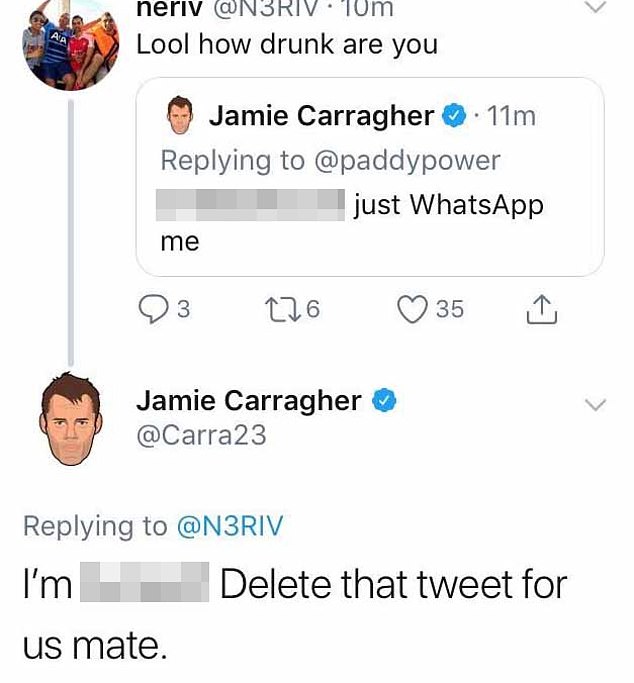 The ex-Liverpool footballer tweeted what he thought was a random number on Sunday. HE later asked a friend to delete the tweet after it was reposted

During the first 24 hours, Mr Forsyth said he initially dismissed the deluge of calls as a virus with his phone.

He told the BBC: ‘I was driving home on Sunday and my phone, which is connected to the car, was constantly ringing.

‘I thought it was a virus so I just kept disregarding it and turned the radio off.

‘I managed to actually speak to somebody and they told me that I needed to get home and check Twitter. They said my number had been posted online. 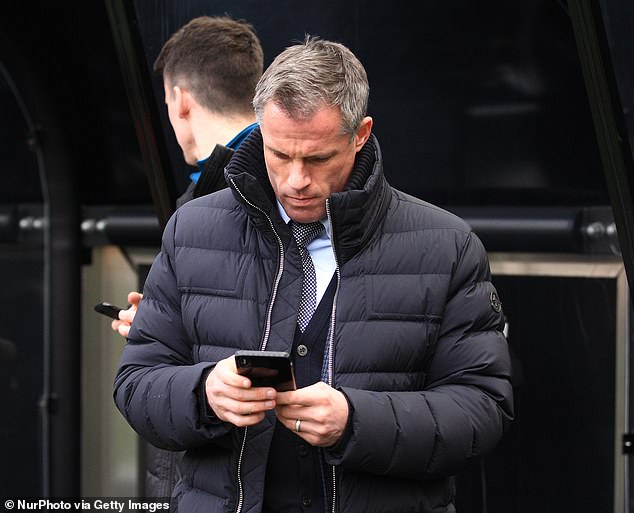 Ex-footballer turned pundit Carragher, pictured, had asked fans to send him a clip of Sky Sports colleague Neville missing a chance for Manchester United in a friendly 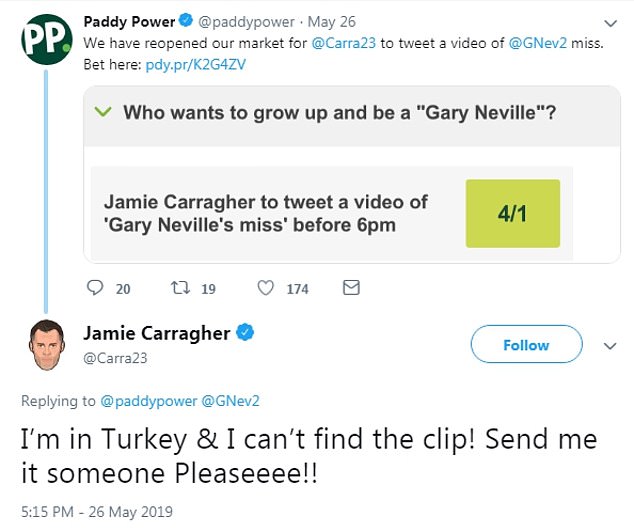 Carragher, who was in Turkey, had appealed for fans to send him a clip of Neville missing a chance for a Manchester United legends side against Bayern Munich in a friendly

‘I laughed it off but they said ‘no seriously, Jamie Carragher has got 1.3 million followers and he’s tweeted your phone number out saying it’s his.’

‘So I got home and, in a blind panic, I asked my partner if she would check Jamie Carragher’s Twitter to see if it was true.

‘Then I switched my laptop on and sure enough there it was – my number.’

On his social media profile Mr Forsyth has written: ‘Don’t phone me, I’m not Carragher, or Neville. I can’t get you tickets for the CL final.’

Mr Forstyh He added: ‘For the first 24 hours I was receiving at least three calls every ten seconds. It was absolutely insane. 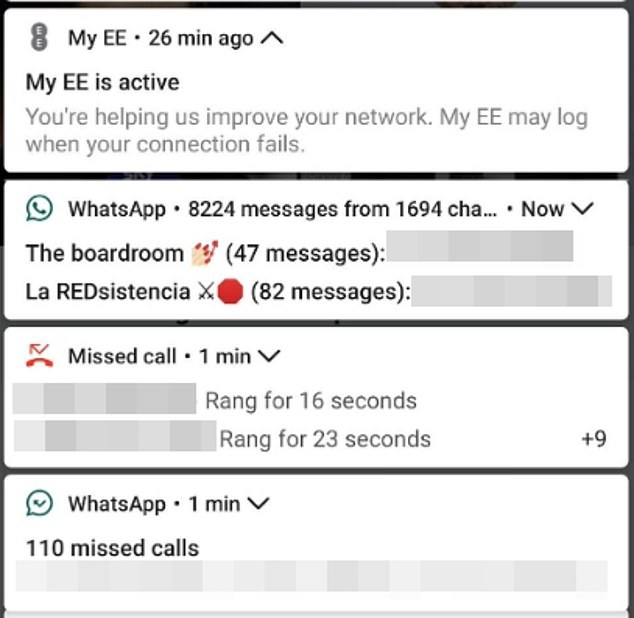 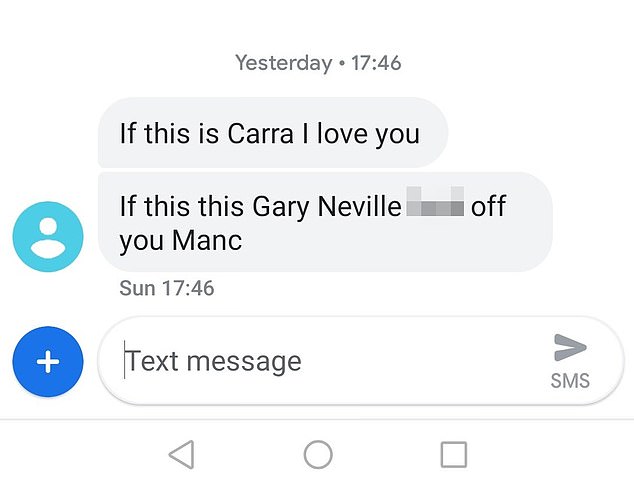 Another one of the messages sent to Mr Forsyth, revealing the sender was unsure if the number was Carragher’s or Neville’s

‘Text messages, I wouldn’t like to say how many.’

Carragher was responding to a Paddy Power tweet advertising the odds of the former defender tweeting a video of Neville’s miss.

Mr Forsyth said people have been saying a ‘very mixed bag of things’ to him in the phone calls and messages, including abusive messages from both Manchester United and Liverpool fans.

He said: ‘A lot of Man United fans have thought it was Carragher so they haven’t been too nice.

‘A lot of Liverpool fans thought it was Gary Neville’s number and again they haven’t been too nice. 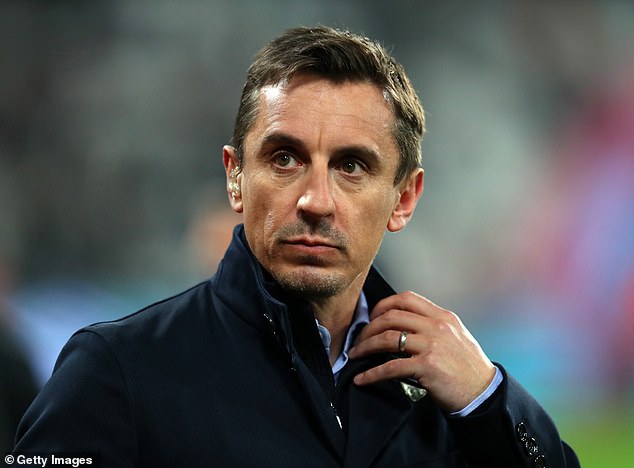 Carragher was responding to a Paddy Power tweet advertising the odds of the former defender tweeting a video of Neville’s miss. Pictured: Gary Neville

‘In between being stressed out about it I have found it a little bit funny.

‘When I’ve been talking to people they’ve been thinking that I’m making my accent up. So they are asking me to talk properly. I’m saying ‘look this is me!’.

‘I’ve told a couple of people my Twitter username so they can actually see that I’m not actually Jamie Carragher.’

Mr Forsyth, who is looking for a new job, now fears that potential employers may not be able to contact him.

He added: ‘I’m looking to change jobs so I’ve applied for a few. I’ve got an interview coming up but I’m also waiting on calls from these other ones.

‘I don’t have contact details for these people so I am just having to hope that they email me or ring off the landline.

‘It is very annoying but it’s also quite funny. I think it’s quite a unique situation that I’m in.

‘It’s given my friends something to talk about as well.’