Gavin and Stacey fans were sent into a frenzy yesterday when James Corden, who plays Smithy in the BBC sitcom, delivered the news everyone had been waiting for; the show was returning.

Whilst it may only be for one episode, which is set to air on Christmas Day this year, speculation has turned to what is going to happen and how the storyline is going to play out, especially after a ten-year hiatus.

Earlier this morning, Larry Lamb who plays Mick Shipman in the series joined Ruth Langsford and Eamonn Holmes on the This Morning sofa to talk about reprising his role as well as discussing the script he has been given.

“I finally read the script and the first little sequence, I found myself crying. It felt like running into somebody who’s been a major part of your life. It was so poignant and I was immediately taking into the feeling of the whole thing. It just sort of took me along.”

Ruth then asked him why he thinks the show is so popular and Larry explained: “I think it’s all about this melding of people from different elements of British society; they are so similar, but so different.

“In the end of the day it’s a love story,” Ruth added and Larry continued: “Everybody gets involved with the love story, and now and again their is a ruck but it then settles down.”

Does this mean fans can expect highs and lows from the Christmas special? And with Larry saying the opening scene made him cry, is there going to be a major storyline twist which no one is expecting?

Ruth also attempted to tease out more details and asked about filming and the actor responded: “Not too long from now, it’s going to be extraordinary.” 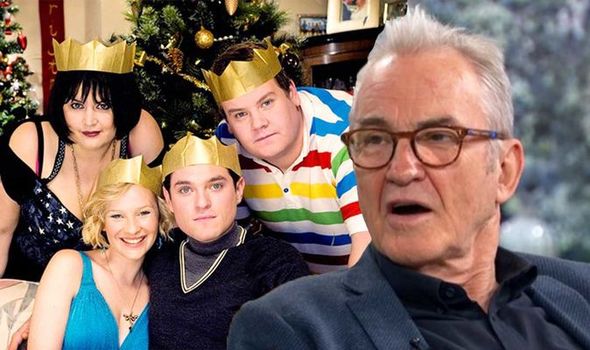 “It’s all super hush hush,” the presenter continued before adding her own predictions for the episodes storyline: ‘Christmas is usually at Mick and Pam’s (Alison Steadman), there’s more room there!”

And determined not to give anything away, Larry just replied with: “Yes,” in agreement.

He also spoke about the initial call off James suggesting they get together and create a one-off episode of the show.

“It was really odd,” Larry divulged. “He said: ‘I just want to know if you’re going to be available in the next little while because it looks like we’re going to be doing a Christmas special.

“It’s extraordinary. It had got to the point where I thought we had left this jewel and they [the other actors] don’t want to go on. 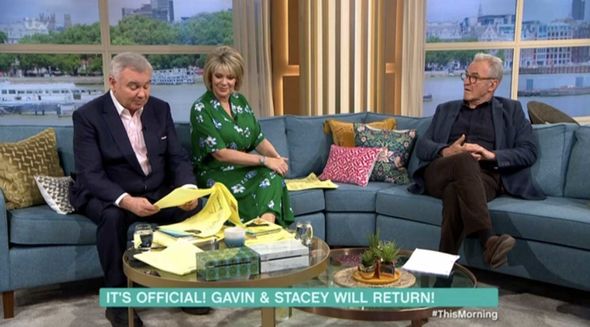 I found myself crying.

Larry on This Morning.

“They [the producers and writers] were only going to do one series [of Gavin and Stacey] anyway!”

The final episode of the beloved sitcom aired on News Year’s Day back in 2010 and ended with the wedding day of Nessa (Ruth Jones) and Dave Coaches (Steffan Rhodri), which was gatecrashed by Smithy who objected.

In a flash forward, Nessa, baby Neil were living in Barry Island with Smithy, whilst lead characters Stacey (Joanna Page) is expecting her first baby with Gavin (Matthew Horne).

But at what stage of their lives are the characters going to be when we revisit them in the one-off episode?

Gavin and Stacey: Christmas Special will be airing on Christmas day this year.