Tokyo: Inside they wore black to honour Japan’s “man of steel,” outside they carpeted central Tokyo in the colour of a hundred grievances.

Shinzo Abe, Japan’s longest-serving prime minister towered over the Budokan in central Tokyo on Tuesday, his portrait dominating Japanese politics months after he was assassinated outside a suburban train station in Nara, southern Japan. 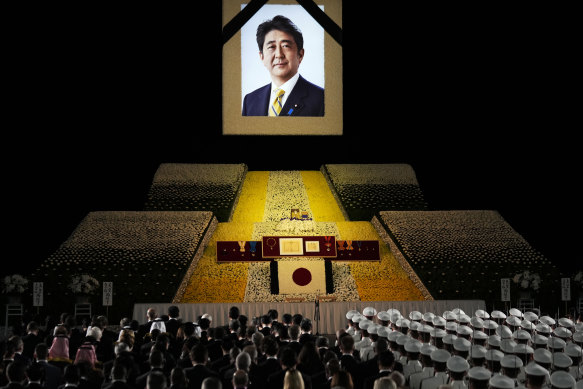 Prime ministers, high court justices and Japanese imperial envoys spoke below Abe. They paid tribute as if he was still at the head of the cabinet table, a position he owned for nine years – pushing Japan to the front of the global stage while driving a wedge at home between the left and the right.

“Can you see down here?” asked his loyal lieutenant, friend and successor as prime minister Yoshihide Suga.

“These people whose shoulders will bear the future of the country are coming here to send you off.”

Abe’s remains were carried into the hall in an urn by his distraught wife Akie. Her pain was still visible through the tears dampening her mask three months after her husband was murdered by former Japanese self-defence forces member Tetsuya Yamagami.

They came to a sombre affair in a sea of grey and black, filled with coat tails, fascinators shrouding the eyes of the mourning and speeches reflecting on Abe’s “heavy duty” for his country as he spearheaded Japan’s first generation of leaders born after the devastation of World War II.

“He was very well respected as an international statesperson,” Albanese said in Tokyo. “We have come to show our respects to not just Mr Abe’s family but to the people of Japan.”

Abbott said Abe was the first very substantial political figure “who was determined to try to put the wartime past entirely behind Japan.” 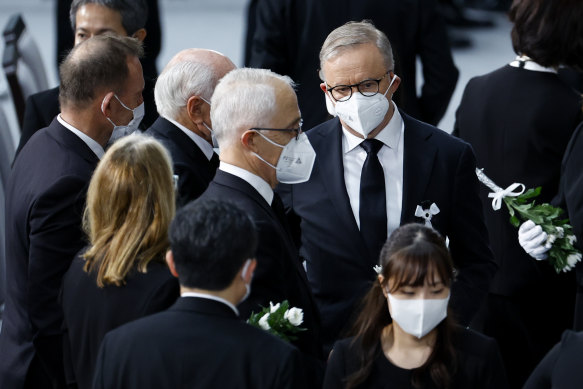 “He wanted Japan to be a normal country. And thanks to that, I think Japan now is the leading democracy in the western Pacific.”

Only Suga, the man who convinced him he could become prime minister at a Yakitori bar in Ginza, broke the Japanese mould of restrained grief.

“I had to see you with my own eyes,” Suga said of the morning he raced to Nara as Abe bled to death on July 8.

“I was able to be in touch with your distinctive smile one last time. From that defining moment, 80 days have passed. The buzzing noises of the cicadas have quietened down with the lapse of time. But the man I dedicated myself to has left. How should I deal with this world?” 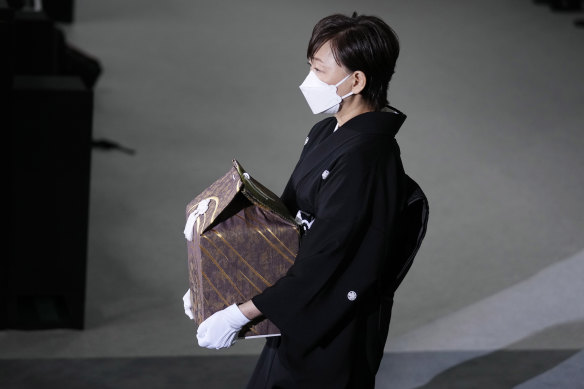 Akie Abe carries an urn containing the ashes of her late husband into the state funeral Credit:Getty

Suga, who lasted only a year as Abe’s successor, has not recovered politically or personally from his old friend’s assassination, which shook Japan, the Liberal Democratic Party and the Japanese people. Three months on, it threatens to send the Japanese government into a political crisis.

Outside the Diet, the Japanese Parliament, thousands gathered to protest Abe’s legacy on Tuesday, including his push to take away limits on Japan’s defence forces, revise the pacifist constitution and Abe’s links to the Unification Church that drove Yamagami’s family into poverty and turned him into an assassin.

“His politics were misogyny, sexism and racism,” said Nakijima Yuniko, a protestor from Tokyo as she chanted outside the Diet. “He was warlike and hostile to feminism.” 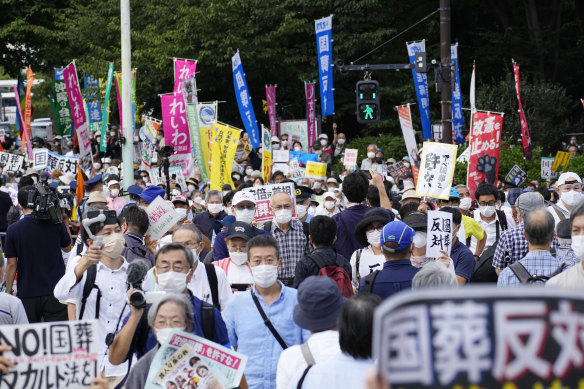 Protesters near the Japanese Parliament who opposed the state funeral for Shinzo Abe.Credit:AP

Nearby, a man dressed as a Soba noodle stall who would only identify himself as Mabe Shinzo claimed Abe had sewn the politics of economic division in Japan. “Rich man ok, poor man bad,” he said.

Their protests followed a similar pattern – Abe was a nationalist who had forgotten Japan’s sins during World War II, Abe was a right-wing free marketeer that had left poorer Japanese citizens worse off, and Abe used his links with the Unification Church to win votes and ostracise others.

Similar claims could be made of the 178 other LDP members who have links to the church, but the cost of Abe’s funeral and the state-funded memorialisation of a man with an imperfect record is what drove most to the streets. 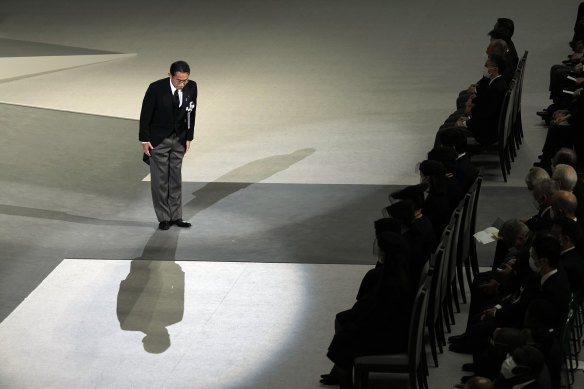 Japan’s Prime Minister Fumio Kishida bows before he sends his condolences during the state funeral.Credit:AP

That same frustration is driving voters away from the LDP. The Japanese government initially dithered on the decision to hold the state funeral before rushing it through without consulting Parliament. Then they waited three months to host the $18 million spectacle – allowing public anger to fester.

Fumio Kishida, Abe and Suga’s successor as prime minister, is now struggling to turn around approval ratings of just 29 per cent without the guidance of a man who won every election between 2012 and 2020.

“I will continue in your footsteps,” Kishida said in front of Abe’s portrait on Tuesday, his influence still reaching beyond the urn.

“It is up to us to bring out the possibilities. We will discuss what need to do for tomorrow’s Japan.”