Nasty moment a young girl launches into a vile rant against bus passenger telling him: ‘You smell of curry you dumb b****’

This is the shocking moment a young girl launches a vile tirade of abuse at a male ‘Indian’ passenger on a bus.

Commuters were horrified when the girl screamed in the face of the man, on a bus in West London.

The fight is said to have erupted after the girl’s mother got into an argument with the bus driver, in which she claimed it was overcrowded.

When the male passenger got involved in the argument, the girl shouted at him: ‘You smell of curry you dumb b**** go back to your f****** Southall slum’! 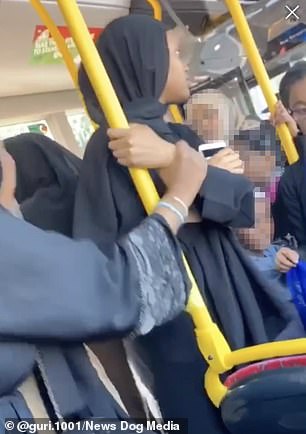 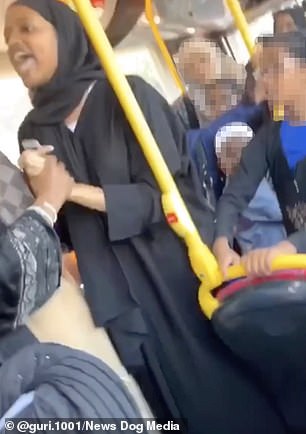 The incident took place on the 195 bus from Romney Road in Brentford towards Hayes town on Saturday 14th September.

The passenger had become irritated by the girl’s behavior towards the bus driver and asked the girl’s mother to tell her to stop shouting, which is when she hurled abuse at him.

Her mother is then seen restraining the girl, to which she responds ‘no let me hit’.

The man can be heard taunting her, telling her that the bus passengers agree with him claiming ‘everyone’s on my side’.

Social media users were disgusted by the scenes in the footage.

@bal.119 wrote: ‘she needs to be taught respect and manners, especially when she is surrounded by vulnerable people like the young girl beside her and the elderly gentleman in front of her. Shame on her!’.

Whilst @j4y-dubz said: ‘Some Youths have no respect now days thinking they’re bada**’.

Meanwhile @champayne-mamii commented that the rant was ‘Actually so disgusting’.

The incident is not thought to have been reported to the police.