The World Health Organisation, responding to complaints that the word monkeypox conjures up racist tropes and stigmatises patients, is recommending that the name of the disease be changed to mpox. Both names are to be used for a year until monkeypox is phased out.

The recommendation, issued on Monday, follows outbreaks that began about six months ago in Europe and the United States, prompting widespread fears that the pathogen could spread widely. 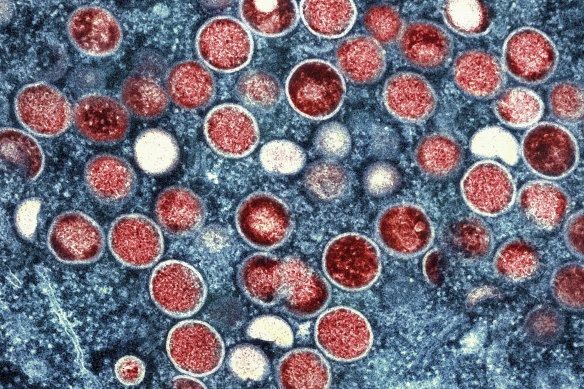 A colorised transmission electron micrograph of monkeypox particles, which are red. Credit:AP

The virus had quietly circulated in rural parts of Central Africa and West Africa for decades, but in recent months most of those who contracted the disease were men who had sex with men on other continents, compounding the stigma of a community long burdened by its association with AIDS.

“WHO will adopt the term mpox in its communications, and encourages others to follow these recommendations, to minimise any ongoing negative impact of the current name and from adoption of the new name,” the health organisation said in a statement.

Monkeypox was always a bit of a misnomer, because monkeys have almost nothing to do with the disease and its transmission. (Rats are the most likely animal reservoir for the virus.)

The name was inspired by a colony of caged lab monkeys in Denmark, where the virus was first identified by researchers more than a half-century ago. Since 2015, the WHO has promoted new criteria for naming infectious diseases. According to the recommendations, names should aim to reduce unnecessary negative impact on travel, tourism or animal welfare, and “avoid causing offence to any cultural, social, national, regional, professional or ethnic groups”.

“Names matter, and so does scientific accuracy, especially for pathogens and epidemics that we are trying to control,” Tulio de Oliveira, a bioinformatician at Stellenbosch University in South Africa, said last summer as researchers campaigned for the WHO to adopt a new name.

The word monkeypox will not disappear entirely. It will remain searchable in the International Classification of Diseases, allowing access to historical information about the disease, the WHO said.