Mother, 39, who downed FORTY shots of Baileys before crashing into cars worth £100,000 then attacking Good Samaritans who tried to wrestle her keys off her is banned driving for 16 months

A woman smashed seven cars during a drunken demolition derby before staggering out and throwing a punch at a witness.

Maria Mills downed around 40 measures of Baileys Irish Cream before driving off and crashing into parked cars worth more than £100,000.

The 39-year-old then attacked passers-by, as they removed her car keys to prevent further damage, by pushing one and trying to punch another.

The witnesses – who had seen her hit six cars as she careered along two streets from her front door – eventually had to pin her to the ground.

At Perth Sheriff Court, Mills admitted driving dangerously while more than three times over the limit in the city on February 5.

Maria Mills, 39, (pictured) was banned from driving for 16 months and ordered her to carry out 200 hours of unpaid work in the community at Perth Sherriff Court yesterday

She admitted crashing her Chevrolet Captiva into a Kia Ceed, a BMW 118, a Kia Rio, a Vauxhall Corsa, a Ford Puma and a Kia XCeed, damaging them all.

Fiscal depute David Currie told the court yesterday that Mills’s partner had gone to her home at 11pm and found her to be under the influence of alcohol.

They had an argument and he left after seeing her pick up the car keys shortly before 1am and head outside to drive off.

Mr Currie said: ‘He challenged her to stop her driving. He observed her leaving with the keys in her hands.

‘They heard a loud bang and car alarms going off. A number of vehicles were damaged.’

Mr Currie said the owners of three cars saw the damage caused by Mills shunting them before driving off. 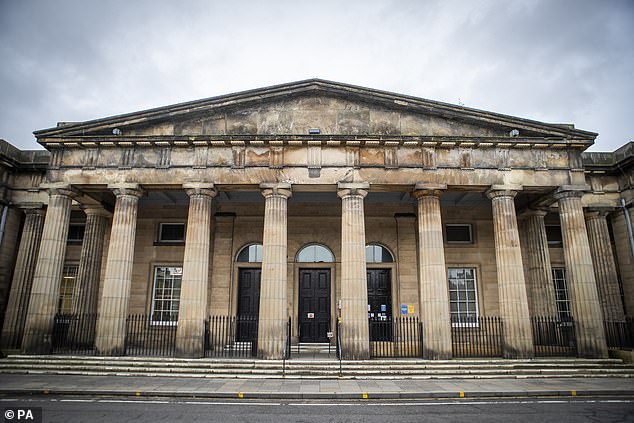 He added: ‘Witnesses heard the bang of another vehicle being damaged. They saw her vehicle on the pavement. They banged the window but she tried to drive off.

‘A witness was able to remove the keys from the ignition.’

Mills lashed out at the witnesses and they had to restrain her on the ground until police arrived.

Police had received calls about Mills’s driving and they found her lying on the ground. Officers handcuffed her to take her to hospital and then to police HQ.

Solicitor Pauline Cullerton, defending, said: ‘She is a first offender. Her mood was particularly low and she had consumed around one and a half bottles of Baileys.

‘She does recall being taken out of the vehicle and pinned to the ground. By that time she was in a state of distress. She regrets what she has done.’

Sheriff Andrew Mackie banned Mills from driving for 16 months and ordered her to carry out 200 hours of unpaid work in the community.