Most intensive care patients made critically ill by Covid-19 are now pulling through – a dramatic improvement since the spring, research suggests.

At the peak of the first wave in April, a patient admitted to intensive care with coronavirus had just a 50/50 chance of surviving.

But the odds of survival appear to have improved markedly to almost eight out of 10, according to latest figures from the Intensive Care National Audit and Research Centre (ICNARC).

They show that of 211 patients admitted to intensive care this autumn – for whom outcome information is available – 165 (or 78 per cent) have been discharged from the units.

At the peak of the first wave in April, a patient admitted to intensive care with coronavirus had just a 50/50 chance of surviving, now it is approaching 80/20 – though medics caution it is too early to see if this trend is permanent

Last night, Intensive Care Society president Dr Ganesh Suntharalingam cautioned it was too early to say if Covid-19 intensive care outcomes were improving, but there was ‘good reason to hope’ they were.

One reason is British-led clinical trials, which have identified two cheap drugs – the steroids dexamethasone and hydrocortisone – that raise the odds of survival. Dexamethasone cut deaths by a third in those put on ventilators, and a fifth in those on oxygen alone, an Oxford University-led trial discovered.

Dr Suntharalingam said the ICNARC data did not yet prove survival had actually improved, because many Covid-19 patients admitted to intensive care units since September 1 were still being treated in them.

‘I’d hesitate to say there are hopeful signs in these particular data, because they are difficult to interpret at this stage,’ he said. ‘But I think there’s good reason to hope that outcomes will be improving.’

Meanwhile, the possibility has been raised that most of the population could be vaccinated against the virus by next Easter.

Oxford University scientists hope authorities will approve their vaccine early in the new year, according to The Times. A mass inoculation campaign would then follow. A Government source told the paper that campaign could take as little as three months – although others think it will take longer.

For now, though, more than a third of the UK’s 67 million people are living under a variety of ‘local’ restrictions, such as bans on members of different households meeting indoors. 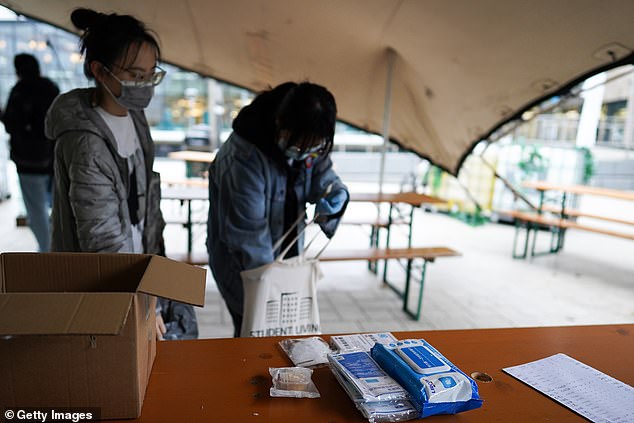 More than a third of the UK’s 67 million people are living under a variety of ‘local’ restrictions, such as bans on members of different households meeting indoors

In Dunstable, police are investigating after 500 travellers turned up at the town’s West Street cemetery on Friday. The limit for funerals is 30.

Local Conservative MP Andrew Selous described the situation as ‘completely unacceptable’ and ‘a flagrant breach of the Covid-19 rules’ that was putting lives at risk.

Care home bosses said it ‘beggared belief’ that inspectors from the Care Quality Commission (CQC) were being allowed to visit homes without being tested for Covid-19 first.

Nadra Ahmed, of the National Care Homes Association, said: ‘The Government promised to put a “ring of steel” around care homes at the start of the pandemic and failed. Now it appears we are being let down again.’

It came as more than 60 GPs sent an urgent letter to Health Secretary Matt Hancock, warning that too much focus on Covid-19 was causing patients to avoid going for important scans.

The medics said the Government’s ‘one-track response threatens more lives and livelihoods than Covid lives saved’ and called for a GP to be included on to the Sage board of scientific advisers.