Residents evacuated amid fears of a catastrophic dam collapse at Torquay have been allowed to return to their homes after a large volume of water was removed from the dam.

Authorities ruled that it was safe for the more than 100 residents from 41 homes to go home from 5pm on Sunday, after they were ordered to leave in the early hours of Saturday. 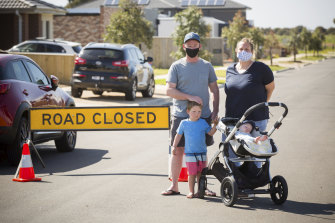 Killian and Alice O’Rourke with children Seamus, 3, and Connor, 7 months, and residents of 40 other houses were allowed home late Sunday afternoon.Credit:Paul Jeffers

The alarm had been raised about 6pm on Friday after water from an unknown source started coming up from the ground in two properties near the corner of Pintail Drive and Horseshoe Bend Road.

Most residents spent the rest of Saturday with family or friends, and about six people stayed in accommodation paid for by the Surf Coast Shire Council.

The affected houses are close to a 180-megalitre irrigation dam on a flower farm.

Incident controller Alistair Drayton, from the State Emergency Service, said it was not yet certain that the dam caused the excess water leak. 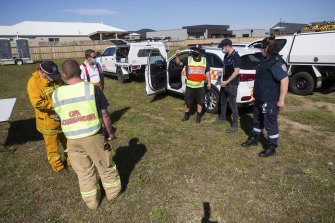 Emergency services gathered on Saturday to pump water out of the Torquay dam near houses.Credit:Paul Jeffers

But to be safe, CFA and SES volunteers pumped 70 to 90 megalitres — equal to 70 to 90 Olympic-sized pools — out of the dam and poured it on nearby farmland, easing pressure on the dam walls.

He was confident there was now "no risk to property or life". The dam wall had not been physically shored up because ‘‘there’s no signs of it collapsing’’.

Mr Drayton said Southern Rural Water workers had dug a test hole where the water was coming up — progressively more slowly since Friday night — and were analysing the site to find out where the water came from.

In the next few days the water authority’s engineers will work with the dam land owners to see what more action might be needed.

Lowtide Drive resident Alice O’Rourke, 35, returned home after sleeping at her parents’ house a few blocks away for the past two nights, along with her husband Killian, 40, and sons Seamus, 3, and Connor, seven months.

The family was woken at 2.30am on Saturday by the SES and evacuated within half an hour.

Ms O’Rourke said "obviously there was some danger" however, "I guess that time we didn’t understand how serious it was because we were probably half asleep".

More information is available at the VicEmergency website emergency.vic.gov.au