New York's Steinway Tower is the newest and skinniest skyscraper

So would you live in the £1.5bn coffee stirrer? It’s the Big Apple’s newest and skinniest skyscraper. But you’ll need a strong stomach to cope with the high life, writes TOM LEONARD

It was Wallis Simpson, Duchess of Windsor, who ordained ‘you can never be too rich or too thin’. She was talking about women, but it increasingly seems she might have been referring to skyscrapers.

A battle of multi-millionaire one-upmanship created Manhattan’s skyline and its new addition once again takes the breath away. More than a quarter of a mile high but no more than 60 ft wide, the Steinway Tower, which has opened for residents, isn’t just exceptionally tall, it is almost painfully thin.

And to live there you have to have the sums that even the Duchess probably never imagined.

It’s not only one of the tallest buildings in the western world; with a height-to-width ratio of 24:1 (that is, 24 times taller than it is wide), it is the world’s skinniest skyscraper. ‘These are not the proportions of a classical column but of a coffee stirrer,’ a critic sniped.

Here, Tom Leonard offers a bird’s eye view of the latest must-have for those living the high life . . . 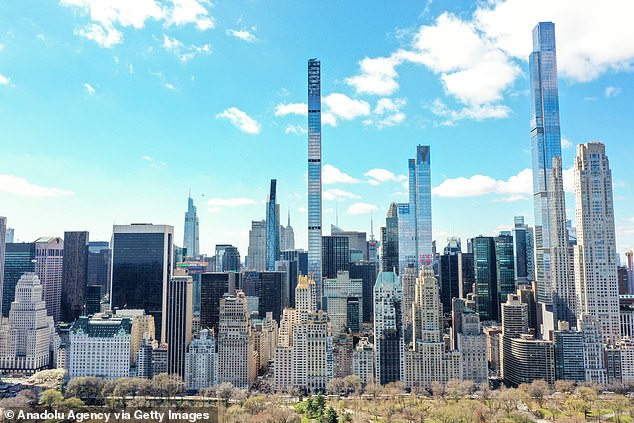 More than a quarter of a mile high but no more than 60 ft wide, the Steinway Tower, which has opened for residents, isn’t just exceptionally tall, it is almost painfully thin 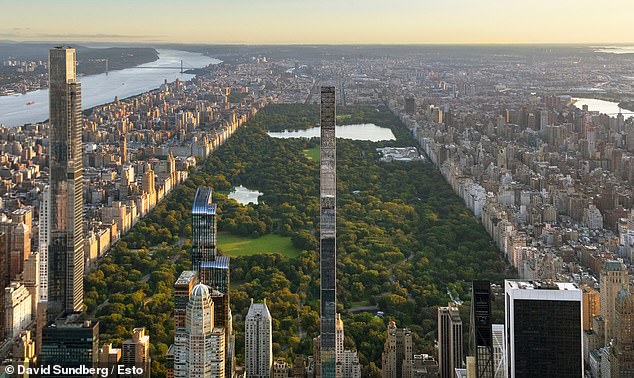 It’s not only one of the tallest buildings in the western world; with a height-to-width ratio of 24:1 (that is, 24 times taller than it is wide), it is the world’s skinniest skyscraper 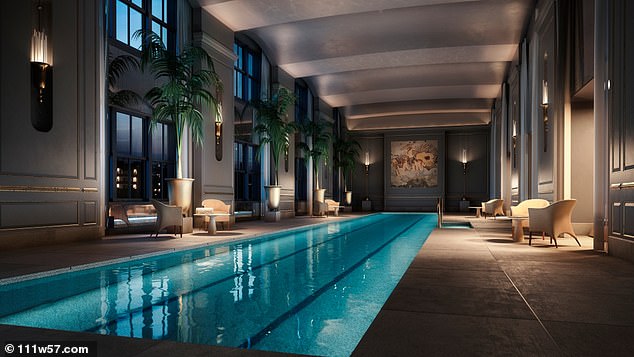 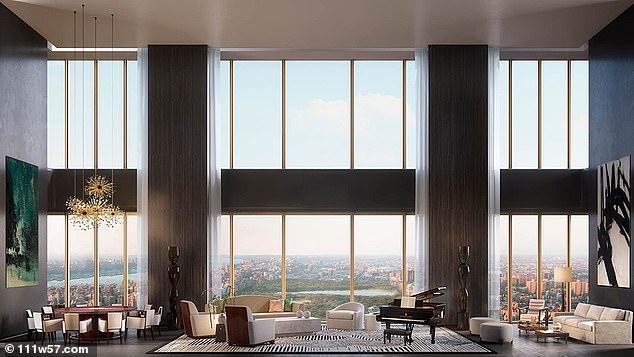 Pictured: A view of the New York cityscape from inside the skyscraper, which overlooks Central Park

View from the Gods

To the casual eye, the 1,428-foot, 84-floor condominium may look like a deathtrap, liable with the first high wind to come crashing into Central Park or at least wobble so violently that if you weren’t already suffering from altitude sickness, you would almost certainly soon be feeling seasick.

But these ‘pencil towers’ are the new ultra-prestige dwelling for the world’s richest people.

The Steinway (named after the 1925 headquarters of the Steinway & Sons piano company at its base) is particularly desirable — or so its owners hope — in being so narrow that each apartment covers at least one floor and so affords all-round panoramic views. In fact, there are 84 floors but only 46 apartments. 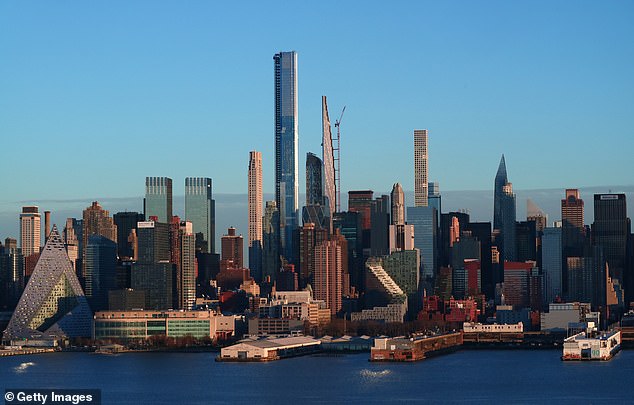 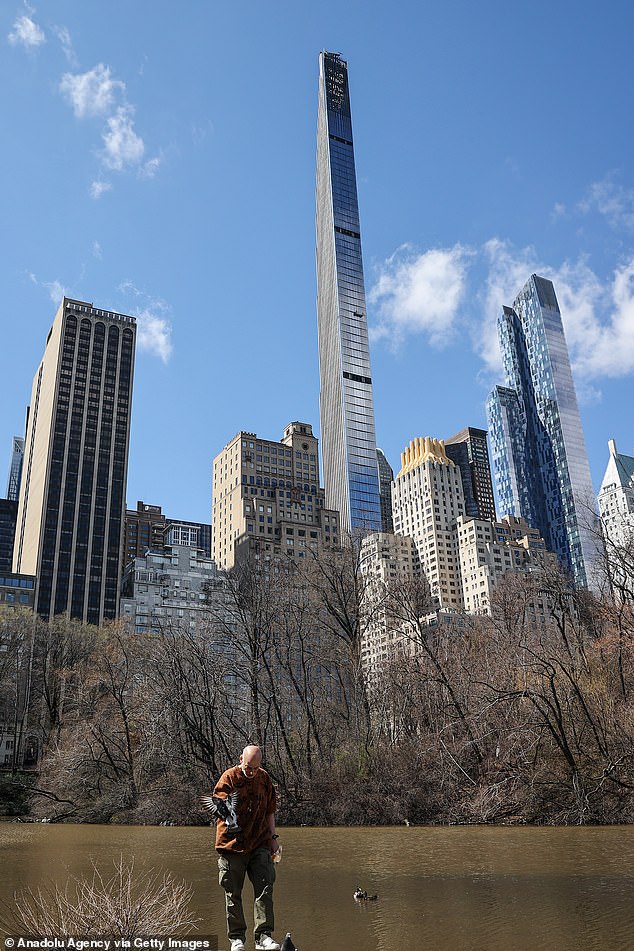 The tower stands at 1,428 feet (435 meters) tall, making it one of the largest buildings in the western hemisphere, and the third tallest in New York City

And those views — impressive near the bottom, heart-stopping at the top — could hardly be bettered from the sort of building that needs to be cleared with the Federal Aviation Administration.

The Steinway, which reportedly cost £1.5 billion ($2 billion) to build, sits almost midway along the southern border of Central Park on a stretch so full of high-rise residential blocks with sky-scraping price tags that it’s been dubbed Billionaires’ Row. Look north and you have the famous park, south and you can see the length of high-rise Manhattan.

New York’s skyscrapers — including the Empire State Building and One World Trade Center (the replacement for the Twin Towers destroyed in the 9/11 attacks) — usually catch the eye because of their design. But, nowadays, the defining characteristic of the new pretenders is slimness.

The trend for super-thin skyscrapers started in 1970s Hong Kong, an island short of space, and took hold in New York after the millennium. 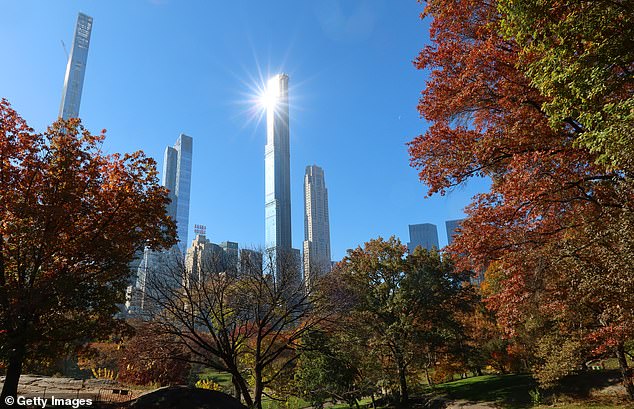 Pictured: The sun reflects off the windows of Central Park Tower next to One 57 and the Steinway Tower and 220 Central Park South on Billionaires’ Row

Slenderness is an engineering term and is generally applied to skyscrapers with a minimum width-to-height ratio of 1:10. However, a building’s ‘slenderness ratio’ is often difficult to calculate because the bases and towers are often different widths as the buildings rise.

In New York, their design is partly a response to planning laws. These restrict the amount of land that can be built on in an area and also the height — or ‘air rights’ — of any building.

But a loophole in the rules means developers can buy a parcel of land, then buy unused air rights from adjacent plots — including from buildings shorter than their allowed maximum — and stack these to build a tall but thin tower.

Technological advances have contributed to the rise of the ‘skinnies’, as has the fact that, in a crowded market, for good or ill they tend to get noticed.

Who buys these apartments? Well, often very rich people who live abroad and are looking for investment opportunities. The tragedy of many recently built New York skyscrapers in a city where millions struggle to find affordable housing is that so many apartments aren’t occupied, their owners — many in China — buying them as speculative investments.

In Billionaires’ Row (where the New York Times estimated in 2019 that 40 per cent of apartments remained unsold) oligarchs have been especially well-represented. 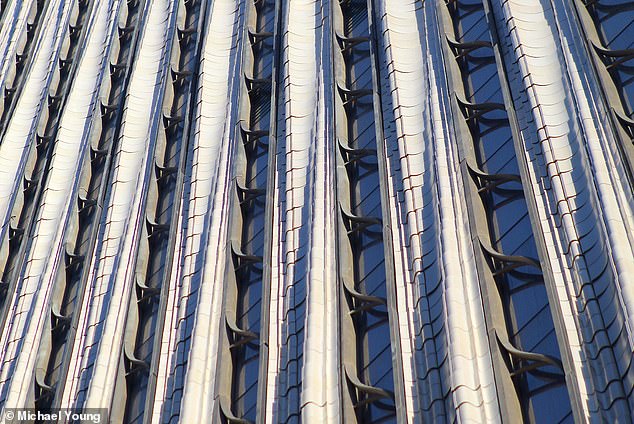 The trend for super-thin skyscrapers started in 1970s Hong Kong, an island short of space, and took hold in New York after the millennium. Pictured:  The outside architecture of Steinway Towers

But rich Russians are nowadays as welcome in New York as vodka at a Temperance Society meeting. Which is a pity given that, if anyone welcomed the Steinway Tower’s 360-degree views, it would be the sort of dodgy businessman who wants as much warning as possible of anyone coming to arrest him.

Hollywood star Jennifer Lopez bought a home at another similarly obtrusive pencil tower at 432 Park Avenue, but the identity of other buyers continues to be hidden in shell companies registered in tax havens.

In five years, new developments on 57th Street have registered 41 residential transactions over $25 million, at an average sales price of $38.5 million.

Studies have suggested there’s a glut in the market for these homes, with many remaining unsold for long periods of time.

For the view from the top of a pencil tower isn’t entirely cloud-free — they don’t have the greatest customer satisfaction record.

It’s long been accepted that super-tall, super-skinny skyscrapers will move significantly in a brisk wind (experiencing this for the first time can be unnerving and even nausea-inducing, although you tend to get used to it). 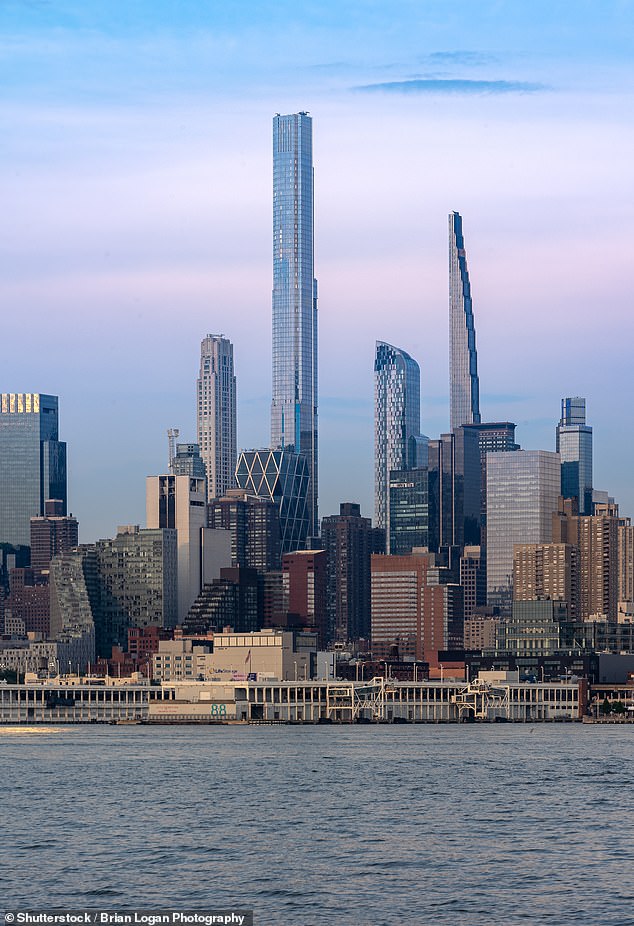 Experts say problems arise when, for reasons of cost, time or incompetence, architects and builders don’t factor this movement into their calculations on everything from walls to plumbing. If hit by high winds, tall skyscrapers can bend by as much as 3 ft.

The developers of 432 Park Avenue, which is 1,396 ft tall, have been accused of failing in this regard by residents who are suing for $125 million, citing 1,500 construction and design defects, many of them allegedly potentially lethal.

Visitors to the penthouse reported feeling ‘super-nauseated’ because of the swaying, and the building has suffered flooding, reportedly due to faulty plumbing, while the wails from its multi-millionaire occupants make clear they weren’t ready for a home that creaks ‘like the galley of a ship’. Experts are concerned other pencil towers will face the same nightmares.

The fact is, life at the top isn’t all it’s cracked up to be.

At the Steinway, the ‘cheapest’ studio flat costs £6 million ($7.75 million) and the prices soar up to more than £50.7 million ($66 million) for the penthouse. The latter — stretching over three floors connected by an oval staircase — provides 7,130 sq ft of interior space.

It includes four bedrooms, five bathrooms, 14 ft high ceilings, a private lift and a hand-made nickel bathtub created by British designer William Holland. The penthouse was bought by an international buyer who snapped it up after only taking a virtual tour.

At the bottom of the tower, the first five floors are taken up by expensive shops and recreation spaces including an 82 ft swimming pool, private dining room and double-height fitness centre. Amenities include a 24-hour concierge and doorman (which sadly still doesn’t beat a smaller downtown rival that offers residents a concierge private jet service).

The Steinway building’s mainly glass facade includes blocks of bronzed terracotta so the tower will change colour at different times and from different angles.

The tower, which tapers strikingly up to its tip, was designed by New York architecture firm SHoP Architects to evoke the Art Deco age during which so many of the city’s greatest skyscrapers went up, and took from 2013 to 2021 to build. Its designers hail it as ‘a project of extraordinary proportions and epic grandeur’.

Other New Yorkers are more likely to hail it as yet another hideous monument to the vanity, arrogance and general excess of the world’s super-rich. The Steinway and Billionaires’ Row cast a lengthening shadow over the southern end of Central Park, which for many Manhattanites is their only recreational outdoor space.

Not content to look down on everyone, the pencil tower brigade wants everyone to notice that they’re looking down on them. Or so it might seem to poorer New Yorkers squinting up from down below.